Quinolone Complexes with Lanthanide Ions: An Insight into their Analytical Applications and Biological Activity
Previous Article in Journal

Environmental and health concerns are driving the need for new materials in food packaging to replace poly- or perfluorinated compounds, aluminum layers, and petroleum-based polymers. Cellulose nanofibrils (CNF) have been shown by a number of groups to form excellent barrier layers to oxygen and grease. However, the influence of lignin-containing cellulose nanofibrils (LCNF) on film barrier properties has not been well reported. Herein, thin films (16 g/m2) from LCNF and CNF were formed on paper substrates through a filtration technique that should mimic the addition of material at the wet end of a paper machine. Surface, barrier and mechanical attributes of these samples were characterized. The analysis on the surface free energy and water contact angle pointed to the positive role of lignin distribution in inducing a certain degree of water repellency. The observed oxygen transmission rate (OTR) and water vapor permeability (WVP) values of LCNF-coated samples were nearly similar to those with CNF. However, the presence of lignin improved the oil proof performance; these layered designs exhibited an excellent resistance to grease (kit No. 12). The attained papers with LCNF coat were formed into bowl-like containers using metal molds and a facile oven drying protocol to evaluate their resistance to oil penetration over a longer period. The results confirmed the capability of LCNF layer in holding commercially available cooking oils with no evidence of leakage for over five months. Also, an improvement in the tensile strength and elongation at break was observed in the studied papers. Overall, the proposed packaging material possesses viable architecture and can be considered as a fully wood-based alternative for the current fluorocarbon systems. View Full-Text
Keywords: lignin-containing cellulose nanofibrils; food packaging; grease barrier properties; oxygen barrier; bio-based oil proof paper lignin-containing cellulose nanofibrils; food packaging; grease barrier properties; oxygen barrier; bio-based oil proof paper
►▼ Show Figures 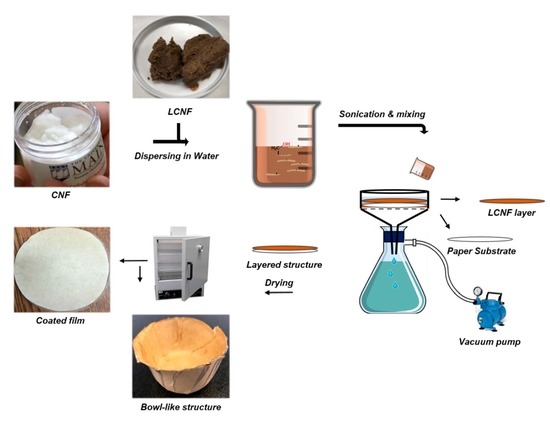