A Supramolecular Approach to Structure-Based Design with A Focus on Synthons Hierarchy in Ornithine-Derived Ligands: Review, Synthesis, Experimental and in Silico Studies

The success of innovative drugs depends on an interdisciplinary and holistic approach to their design and development. The supramolecular architecture of living systems is controlled by non-covalent interactions to a very large extent. The latter are prone to extensive cooperation and like a virtuoso play a symphony of life. Thus, the design of effective ligands should be based on thorough knowledge on the interactions at either a molecular or high topological level. In this work, we emphasize the importance of supramolecular structure and ligand-based design keeping the potential of supramolecular H-bonding synthons in focus. In this respect, the relevance of supramolecular chemistry for advanced therapies is appreciated and undisputable. It has developed tools, such as Hirshfeld surface analysis, using a huge data on supramolecular interactions in over one million structures which are deposited in the Cambridge Structure Database (CSD). In particular, molecular interaction surfaces are useful for identification of macromolecular active sites followed by in silico docking experiments. Ornithine-derived compounds are a new, promising class of multi-targeting ligands for innovative therapeutics and cosmeceuticals. In this work, we present the synthesis together with the molecular and supramolecular structure of a novel ornithine derivative, namely N-α,N-δ)-dibenzoyl-(α)-hydroxymethylornithine, 1. It was investigated by modern experimental and in silico methods in detail. The incorporation of an aromatic system into the ornithine core induces stacking interactions, which are vital in biological processes. In particular, rare C=O…π intercontacts have been identified in 1. Supramolecular interactions were analyzed in all structures of ornithine derivatives deposited in the CSD. The influence of substituent was assessed by the Hirshfeld surface analysis. It revealed that the crystal packing is stabilized mainly by H…O, O…H, C…H, Cl (Br, F)…H and O…O interactions. Additionally, π…π, C-H…π and N-O…π interactions were also observed. All relevant H-bond energies were calculated using the Lippincott and Schroeder H-bond model. A library of synthons is provided. In addition, the large synthons (Long-Range Synthon Aufbau Module) were considered. The DFT optimization either in vacuo or in solutio yields very similar molecular species. The major difference with the relevant crystal structure was related to the conformation of terminal benzoyl C15-C20 ring. Furthermore, in silico prediction of the extensive physicochemical ADME profile (absorption, distribution, metabolism and excretion) related to the drug-likeness and medicinal chemistry friendliness revealed that a novel ornithine derivative 1 has the potential to be a new drug candidate. It has shown good in silico absorption and very low toxicity. View Full-Text
Keywords: ornithine; supramolecular synthon; π…π; C-H…π; C=O (lone pair)…π and N-O…π interactions; DFT; electrostatic molecular potential; H-bond energies; molecular (Hirshfeld) surface; SwissADME; drug-likeness; ProTox II ornithine; supramolecular synthon; π…π; C-H…π; C=O (lone pair)…π and N-O…π interactions; DFT; electrostatic molecular potential; H-bond energies; molecular (Hirshfeld) surface; SwissADME; drug-likeness; ProTox II
►▼ Show Figures 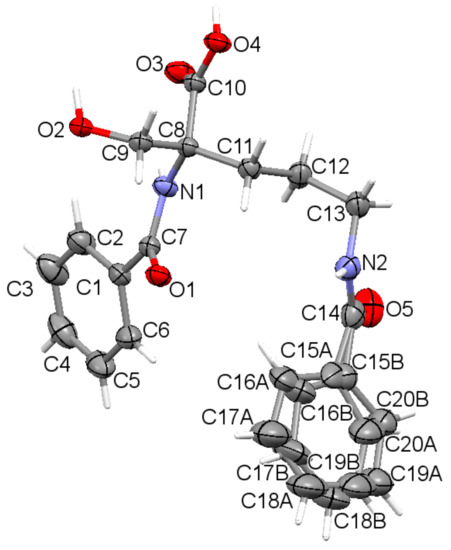