Epigallocatechin-3-Gallate (EGCG) has been extensively studied for its protective effect against cardiovascular disorders. This effect has been attributed to its action on multiple molecular pathways and transmembrane proteins, including the cardiac Nav1.5 channels, which are inhibited in a dose-dependent manner. However, the molecular mechanism underlying this effect remains to be unveiled. To this aim, we have characterized the EGCG effect on Nav1.5 using electrophysiology and molecular dynamics (MD) simulations. EGCG superfusion induced a dose-dependent inhibition of Nav1.5 expressed in tsA201 cells, negatively shifted the steady-state inactivation curve, slowed the inactivation kinetics, and delayed the recovery from fast inactivation. However, EGCG had no effect on the voltage-dependence of activation and showed little use-dependent block on Nav1.5. Finally, MD simulations suggested that EGCG does not preferentially stay in the center of the bilayer, but that it spontaneously relocates to the membrane headgroup region. Moreover, no sign of spontaneous crossing from one leaflet to the other was observed, indicating a relatively large free energy barrier associated with EGCG transport across the membrane. These results indicate that EGCG may exert its biophysical effect via access to its binding site through the cell membrane or via a bilayer-mediated mechanism. View Full-Text
Keywords: EGCG; Nav1.5; cellular electrophysiology; molecular dynamics; ion channels EGCG; Nav1.5; cellular electrophysiology; molecular dynamics; ion channels
►▼ Show Figures 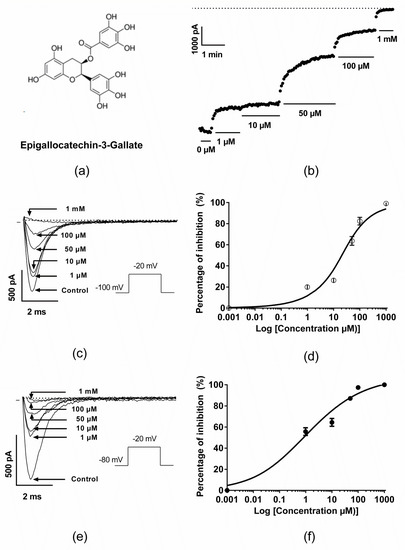