A Novel Alternative in the Treatment of Detrusor Overactivity? In Vivo Activity of O-1602, the Newly Synthesized Agonist of GPR55 and GPR18 Cannabinoid Receptors
Previous Article in Journal

Endocannabinoid System in the Airways

(1) Background: Acute administration of the cannabinoid receptor 1 (CB1R) inverse agonist Rimonabant (SR141716A) to fed Wistar rats was shown to elicit a rapid and short-lasting elevation of serum free fatty acids. (2) Methods: The effect of Rimonabant on lipolysis in isolated primary rat adipocytes was studied to raise the possibility for direct mechanisms not involving the (hypothalamic) CB1R. (3) Results: Incubation of these cells with Rimonabant-stimulated lipolysis to up to 25% of the maximal isoproterenol effect, which was based on both CB1R-dependent and independent mechanisms. The CB1R-dependent one was already effective at Rimonabant concentrations of less than 1 µM and after short-term incubation, partially additive to β-adrenergic agonists and blocked by insulin and, in part, by adenosine deaminase, but not by propranolol. It was accompanied by protein kinase A (PKA)-mediated association of hormone-sensitive lipase (HSL) with lipid droplets (LD) and dissociation of perilipin-1 from LD. The CB1R-independent stimulation of lipolysis was observed only at Rimonabant concentrations above 1 µM and after long-term incubation and was not affected by insulin. It was recapitulated by a cell-free system reconstituted with rat adipocyte LD and HSL. Rimonabant-induced cell-free lipolysis was not affected by PKA-mediated phosphorylation of LD and HSL, but abrogated by phospholipase digestion or emulsification of the LD. Furthermore, LD isolated from adipocytes and then treated with Rimonabant (>1 µM) were more efficient substrates for exogenously added HSL compared to control LD. The CB1R-independent lipolysis was also demonstrated in primary adipocytes from fed rats which had been treated with a single dose of Rimonabant (30 mg/kg). (4) Conclusions: These data argue for interaction of Rimonabant (at high concentrations) with both the LD surface and the CB1R of primary rat adipocytes, each leading to increased access of HSL to LD in phosphorylation-independent and dependent fashion, respectively. Both mechanisms may lead to direct and acute stimulation of lipolysis at peripheral tissues upon Rimonabant administration and represent targets for future obesity therapy which do not encompass the hypothalamic CB1R. View Full-Text
Keywords: cyclic adenosine monophosphate (cAMP)-dependent signaling; cannabinoid receptor 1 (CB1R); hormone-sensitive lipase (HSL); interfacial activation; lipid droplets (LD); lipolysis; obesity; Rimonabant cyclic adenosine monophosphate (cAMP)-dependent signaling; cannabinoid receptor 1 (CB1R); hormone-sensitive lipase (HSL); interfacial activation; lipid droplets (LD); lipolysis; obesity; Rimonabant
►▼ Show Figures 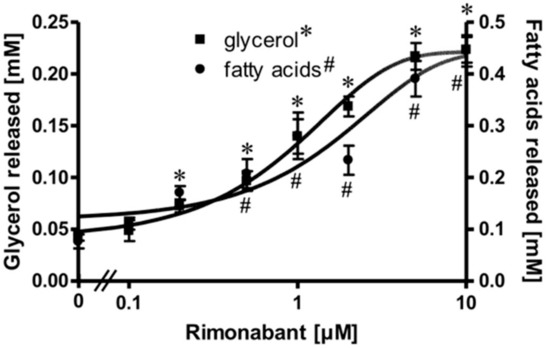