The Mediterranean basin is one of the regions heavily affected by jellyfish bloom phenomena, mainly due to the presence of scyphozoans, such as Rhizostoma pulmo. The jellyfish have few natural predators, and their bodies represent an organic-rich substrate that can support rapid bacterial growth with great impact on the structure of marine food webs. In Asiatic countries, jellyfish are widely studied for their health benefits, but their nutritional and nutraceutical values still remain poorly characterized. In this study, the differences in the 1H NMR spectroscopy metabolic profiles of R. pulmo female gonads and body fractions (including umbrella and oral arms), in different sampling periods, were studied. For each body compartment both lipid and aqueous extracts were characterized and their 1H NMR metabolic profiles subjected to multivariate analysis. From a statistical analysis of the extracts, a higher contents of ω-3 polyunsaturated fatty acids (PUFAs), amino acid and osmolytes (homarine, betaine, taurine) with important roles in marine invertebrates were observed in female gonads, whereas umbrella and oral arms showed similar metabolic profiles. These results support a sustainable exploitation of the jellyfish for the extraction of bioactive compounds useful in nutraceutical, nutricosmetics, and functional food fields. View Full-Text
Keywords: Rhizostoma pulmo; jellyfish; female gonads; umbrella; oral arms; metabolomic; 1H NMR Spectroscopy Rhizostoma pulmo; jellyfish; female gonads; umbrella; oral arms; metabolomic; 1H NMR Spectroscopy
►▼ Show Figures 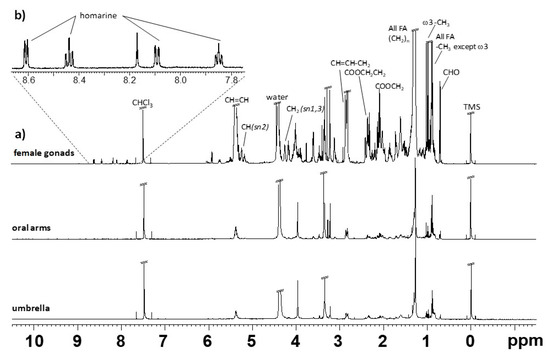