Towards the Preparation of Stable Cyclic Amino(ylide)Carbenes

Cyclic amino(ylide)carbenes (CAYCs) are the ylide-substituted analogues of N-heterocyclic Carbenes (NHCs). Due to the stronger π donation of the ylide compared to an amino moiety they are stronger donors and thus are desirable ligands for catalysis. However, no stable CAYC has been reported until today. Here, we describe experimental and computational studies on the synthesis and stability of CAYCs based on pyrroles with trialkyl onium groups. Attempts to isolate two CAYCs with trialkyl phosphonium and sulfonium ylides resulted in the deprotonation of the alkyl groups instead of the formation of the desired CAYCs. In case of the PCy3-substituted system, the corresponding ylide was isolated, while deprotonation of the SMe2-functionalized compound led to the formation of ethene and the thioether. Detailed computational studies on various trialkyl onium groups showed that both the α- and β-deprotonated compounds were energetically favored over the free carbene. The most stable candidates were revealed to be α-hydrogen-free adamantyl-substituted onium groups, for which β-deprotonation is less favorable at the bridgehead position. Overall, the calculations showed that the isolation of CAYCs should be possible, but careful design is required to exclude decomposition pathways such as deprotonations at the onium group. View Full-Text
Keywords: carbenes; ylides; DFT calculations; electronic structure; catalysis; ligands; structure–activity relationship carbenes; ylides; DFT calculations; electronic structure; catalysis; ligands; structure–activity relationship
►▼ Show Figures 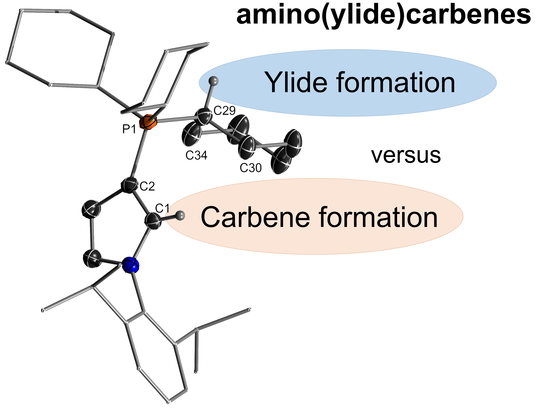