:
Aberrant activation of a Wnt/β-catenin pathway results in nuclear accumulation of β-catenin in colon cancer. Inhibiting β-catenin is one strategy for treating colon cancer. Here, we identified Z-ajoene, a sulfur containing compound isolated from crushed garlic, as an inhibitor of colon cancer cell growth. Z-Ajoene repressed β-catenin response transcriptional activity, intracellular β-catenin levels, and its representative target protein levels (c-Myc and cyclin D1) in SW480 colon cancer cells. To clarify the regulatory mechanism of decreased β-catenin levels, we examined the effect of Z-ajoene on β-catenin phosphorylation, which is involved in β-catenin degradation. Z-Ajoene promoted the phosphorylation of β-catenin at Ser45 in a casein kinase 1α (CK1α)-dependent manner, which is an essential step in β-catenin degradation in the cytosol. These findings indicate that Z-ajoene from garlic may be a potential chemotherapeutic agent by modulating CK1α activity and the Wnt/β-catenin signaling pathway.
Keywords:
colon cancer; β-catenin; Z-ajoene; phosphorylation; casein kinase 1α 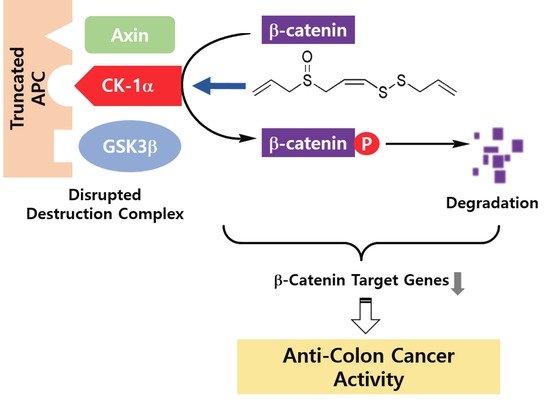 Colon cancer is a common cancer associated with high incidence and high mortality [1]. About 75% of colon cancers arise from truncation in the adenomatous polyposis coli (APC) gene, resulting in deregulation of the Wnt signaling and the accumulation of cytosolic β-catenin [2,3]. β-Catenin, a co-transcription regulator of physiological homeostasis, is a critical regulator of Wnt signaling. Without a Wnt ligand, β-catenin is degraded in the cytoplasm by destruction complex machinery, including axin, adenomatosis polyposis coli (APC), glycogen synthase kinase 3 (GSK3), and casein kinase 1α (CK1α). Within the destruction complex, β-catenin is phosphorylated by CK1α and GSK3 for ubiquitination and proteasomal degradation. Primary phosphorylation at Ser45 of β-catenin by CK1α is a prerequisite for GSK3-mediated phosphorylation at Thr41, Ser37, and Ser33, which is a pivotal event in the regulation of β-catenin in the cytosol [4]. In the existence of Wnt ligand, Wnt binds to its receptor complex and then the destruction complex is disturbed. This causes accumulation in the cytosol and nuclear translocation of β-catenin. A β-catenin/T-cell factor (TCF) transcription factor complex gives rise to the expression of target genes including c-Myc or cyclin D1, leading to the proliferation and metastasis of cancer cells [5]. Therefore, modulation of β-catenin levels in the aberrant activation of Wnt signaling is a potential therapeutic strategy for the chemoprevention and treatment of colon cancer.
Garlic (Allium sativum L., Amaryllidaceae) is one of the most important spices from ancient times and has been intensively studied for therapeutic properties, such as antithrombotic [6], lipid-lowering [7], anti-oxidative [8], and anti-hypercholesterolemia activities [9]. Ajoene, a mixture of E- and Z-isomers (E- and Z-4, 5, 9-trithiadodeca- 1, 6, 11-triene 9-oxide) is found in crushed garlic and has a broad variety of biological activities. Previously, we reported the anti-inflammatory [10], anti-oxidant [11], and anti-fatty liver activities of ajoene [12]. In this study, we report the modulatory activity of β-catenin by Z-ajoene from garlic as a regulator of the Wnt pathway and reveal its underlying mechanism.

Z-Ajoene was isolated and the structure was elucidated as described previously [10].

Wnt3a-CM was prepared according to the manufacturer’s instruction. Wnt3a-secreting L cells were cultured in DMEM with 10% fetal bovine serum (FBS) for four days. The medium was harvested and followed by sterilization using a 0.22-μm filter. Fresh medium was added to the cells and cultured for another three days. The collected medium was combined with the previous medium.

Cells (1 × 106 cells/dish) were treated for 15 h with/without Z-ajoene. Total RNA was isolated using RNA-isolation Trizol reagent (Life Technologies, Carlsbad, CA, USA) and then reverse transcribed into cDNA using reverse transcriptase and random hexamer. The cDNA was mixed with buffer, dNTP, Taq DNA polymerase (Promega, Madison, WI, USA) and primers. The sense and antisense primers for β-catenin were 5′-GGGATGTTCACAACCGAATTGTTATC-3′ and 5′-ACCAGAGTGAAAAGAACGATAGCTAGGA-3′, respectively. The sense and antisense primers for β-actin were 5′-TGTGATGGTGGGAATGGGTCAG-3′ and 5′-TTTGATGTCACGCACGATTTCC-3′, respectively. The amplified DNA was separated on 1.5 % agarose gels and stained with ethidium bromide.

The data were expressed as the mean ± S.D. of three experiments, and statistical analysis was performed by the Student’s t-test. A p-value of < 0.05 was considered to indicate a significant difference.