Diphenylalanine peptide (FF), which self-assembles into rigid tubular nanostructures, is a very short core recognition motif in Alzheimer’s disease β-amyloid (Aβ) polypeptide. Moreover, the ability of the phenylalanine (F or Phe)-homopeptides to self-assemble into ordered nanostructures has been proved. Within this context it was shown that the assembly preferences of this family of compounds is altered by capping both the N- and C-termini using highly aromatic fluorenyl groups (i.e., fluorenyl-9-methoxycarbonyl and 9-fluorenylmethyl ester, named Fmoc and OFm, respectively). In this article the work performed in the field of the effect of the structure and incubation conditions on the morphology and polymorphism of short (from two to four amino acid residues) Phe-homopeptides is reviewed and accompanied by introducing some new results for completing the comparison. Special attention has been paid to the influence of solvent: co-solvent mixture used to solubilize the peptide, the peptide concentration and, in some cases, the temperature. More specifically, uncapped (FF, FFF, and FFFF), N-capped with Fmoc (Fmoc-FF, Fmoc-FFF, and Fmoc-FFFF), C-capped with OFm (FF-OFm), and doubly capped (Fmoc-FF-OFm, Fmoc-FFF-OFm, and Fmoc-FFFF-OFm) Phe-homopeptides have been re-measured. Although many of the experienced assembly conditions have been only revisited as they were previously reported, other experimental conditions have been examined by the first time in this work. In any case, pooling the effect of highly aromatic blocking groups in a single study, using a wide variety of experimental conditions, allows a perspective of how the disappearance of head-to-tail electrostatic interactions and the gradual increase in the amount of π–π stacking interactions, affects the morphology of the assemblies. Future technological applications of Phe-homopeptides can be envisaged by choosing the most appropriate self-assemble structure, defining not only the length of the peptide but also the amount and the position of fluorenyl capping groups. View Full-Text
Keywords: molecular engineering; morphological engineering; nanostructures; peptides; staking interactions; supramolecular chemistry molecular engineering; morphological engineering; nanostructures; peptides; staking interactions; supramolecular chemistry
►▼ Show Figures 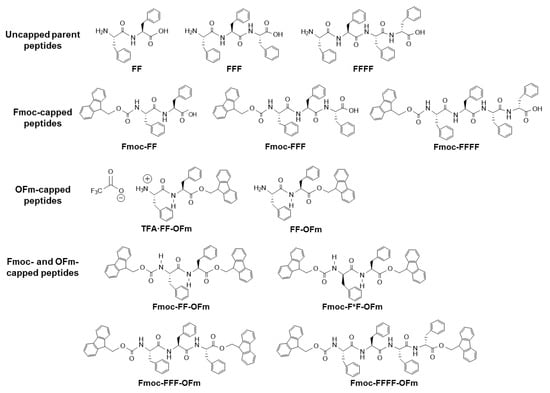