Use of Biodegradable, Chitosan-Based Nanoparticles in the Treatment of Alzheimer’s Disease
Next Article in Special Issue

Nootkatone, a Dietary Fragrant Bioactive Compound, Attenuates Dyslipidemia and Intramyocardial Lipid Accumulation and Favorably Alters Lipid Metabolism in a Rat Model of Myocardial Injury: An In Vivo and In Vitro Study
Previous Article in Journal

Tangerine (Citrus tangerina) is one of the most important crops of Thailand with a total harvest that exceeds 100,000 tons. Citrus essential oils are widely used as aromatherapy and medicinal agents. The effect of tangerine essential oil on human brain waves and sleep activity has not been reported. In the present study, we therefore evaluated these effects of tangerine essential oil by measurement of electroencephalography (EEG) activity with 32 channel platforms according to the international 10–20 system in 10 male and 10 female subjects. Then the sleep onset latency was studied to further confirm the effect on sleep activity. The results revealed that different concentrations, subthreshold to suprathreshold, of tangerine oil gave different brain responses. Undiluted tangerine oil inhalation reduced slow and fast alpha wave powers and elevated low and mid beta wave powers. The subthreshold and threshold dilution showed the opposite effect to the brain compared with suprathreshold concentration. Inhalation of threshold concentration showed effectively decreased alpha and beta wave powers and increased theta wave power, which emphasize its sedative effect. The reduction of sleep onset latency was confirmed with the implementation of the observed sedative effect of tangerine oil.
Keywords: Citrus tangerina; tangerine; limonene; electroencephalography activity; sleep onset latency Citrus tangerina; tangerine; limonene; electroencephalography activity; sleep onset latency

Nowadays, the trend of organic products and natural consumers is growing in agricultural product marketing in the world. This may therefore be an option for people to select natural products more than in the past [1]. Its effects turn the niche market to the mass market, and one of the famous natural products is essential oils. In 2018, the global essential oils market demand was reported as 226.9 kilotons, and the market forecast is that it is likely to increase steadily [2]. Essential oil products are extracted from several parts of a plant, such as flowers, leaves, roots, and fruits, which contain different chemical-like hydrocarbons, alcohol, aldehydes, esters, ethers, ketones, oxides phenols, and terpenes. Different essential oils have different effects on the human nervous system such as the relaxing effect of lavender oil, the vigilance effect of jasmine oil and rosemary oil, and the attention effect of rose oil and orchid oil on the brain and cognitive functions [3,4,5]. Moreover, the analysis of EEG revealed that lavender oil increased the power of theta and alpha wave [6], and rosemary essential oil can also decrease alpha1 and alpha2 waves and increase beta waves [7]. The effect of essential oil begins during inhalation of the essential oil molecules through the nostril and attachment to odorant receptors, activating G protein-coupled receptor. It will then activate synaptic transmission to the central nervous system [8]. The signal input finally ascends to several brain regions that are responsible for olfactory perception, autonomic homeostasis, and other higher brain functions [9]. There are many recording or imaging methods measuring the effect of stimuli on brain. Electroencephalography (EEG) is one of the most popular methods for observing brain oscillations due to its cost efficiency. Brain waves are classified by frequencies ranging from 0.05 to 500 Hz such as delta wave (0–4 Hz), theta wave (4–8 Hz), alpha wave (8–13 Hz), beta wave(13–30 Hz), and gamma (above 30 Hz) [10]. In this study, we focused on tangerine (Citrus tangerina) peel essential oil. According to the reports of the office of agricultural economics of Thailand in 2016, tangerine is Thailand’s most important crop with high productivity of about 146,526 tons. Tangerine peel that is rich in essential oil is usually treated as waste or by-product. The previous study showed that tangerine peel extract has significant antioxidant activity, which can possibly be applied to food and medicine [11]. The components of tangerine essential oil consist of limonene, γ-terpinene, paracymene, β-myrcene, β-pinene, α-pinene, and others. The content of each component may vary by geographic location. Limonene is major component of tangerine essential oil. Many studies revealed that limonene has effects on the human brain and body responses including an increase of systolic blood pressure, alertness level and sleeplessness [12,13]. However, there is no evidence to support tangerine oils effects and an effective dose with designed brain waves and responses. Therefore, this study continued investigating an implemented illustration of obtained knowledge. Sleep latency was then studied to further confirm the effect of the selected essential oil dilution.

We tested subthreshold and threshold dilutions of tangerine oil in female subject because of a sensitivity issue. Subthreshold and threshold were examined by two dilution tests that are 1:8000 and 1:1000 dilutions, respectively. Interestingly, subthreshold and threshold dilutions caused different brain responses compared with suprathreshold concentration (undiluted concentration). The result showed slightly increased theta wave power and slightly decreased alpha wave power. No beta wave power reduction was observed during 1:8000 dilution inhalation. It revealed more reduction of alpha and beta wave powers and an increase of theta wave power in 1:1000 dilution (Figure 3). The subthreshold and threshold dilution showed opposite effects on the brain compared with suprathreshold concentration, which emphasizes the sedative effect of the oil on these levels. Tangerine oil was then further tested for sleep onset latency. The result showed that the oil with 1:1000 dilution significantly reduced sleep onset latency in female subjects compared with baseline sleep onset latency (Figure 8). Emotional states were self-estimated by subjects. The results showed that suprathreshold concentration tends to increase the fresh feeling in both female and male subjects (Table 3). This study focused on five emotions consisting of good, active, drowsy, fresh, and romantic. Romantic feeling was the lowest, among others.

The study protocols of this study were approved by the Institutional Review Board, Walailak University, and all the subjects were informed according to the standard of ethical practice in research involving humans. The approval numbers are WUEC-16-043-01 (14 June 2017) and WUEC-19-140-01 (11 September 2019). A total of 20 healthy subjects, consisting of 10 Thai males and 10 Thai females aged 19–25 years old were recruited for tangerine oil evaluation. Ten female subjects were recruited to examine sleep onset latency. All subjects were right-handed to limit dominant activity interferences and were undergraduate university students. All subjects had adequate sleep with at least 6 h of sleep prior to the day of experiment. All female subjects declared not to be on a menstrual period on the day of experiment. Alcohol consumption, medications and smoking were prohibited for a week before the day of experiment. Moreover, none of the subjects experienced neurological injuries and olfactory disorder. The diet pattern of the subjects was the traditional Thai eating pattern [35]. The subjects were requested to confirm an olfactory evaluation test using the smell test. Subjects’ baseline characteristics are shown in Table 4; Table 5. The method was slighty modified from Koomhin et al. 2020 [36].

The Tangerine oil extracted using steam distillation was obtained from Thai China Flavours & Fragrances Co., Ltd.(Bangkok, Thailand). The tangerine oil was analyzed by gas chromatography–mass spectroscopy (GC–MS) (Agilent 5977A, Agilent Technologies, Inc., Santa Clara, CA, USA) using two VF-WAXms columns (30 m × 250 µm, film thickness 0.25 μm). The oven temperature was programmed at 35–200 °C (10 °C/min), 200 °C (5 min), 200–250 °C (4 °C/min), and 250 °C (10 min); injector temperature: 250 °C; carrier gas: helium: splitting ratio 500:1; injection volume: 1 μL; interface temperature: 250 °C; MS source temperature: 230 °C; and MS quadrupole temperature: 150 °C. The compounds were identified by their retention indices and their mass spectra. The components of the oil were identified by comparison of their mass spectra fragmentation and computer matching using the Wiley 10 and NIST 14 libraries (Database/ChemStation data system). Fifty microliters of essential oil were spotted on a filter paper and the filter paper was attached to the subject’s nose at approximately 3-cm distance for analysis of the effects of tangerine essential oil inhalation on brain waves and mood responses compared to baseline (without essential oil) as shown in Figure 9. To illustrate concentration effect, different concentrations of tangerine oil including undiluted concentration, 1:1000 dilution, and 1:8000 dilution, which represent suprathreshold, threshold, and subthreshold, respectively, were used for experiment. To evaluate the effect of essential oil on sleep study, 25 μL of essential oil that contains a tangerine essential oil concentration of 1:1000 dilution was spotted on a filter paper and two sets of this filter paper were inserted into the pillow case of the subject.

Data were shown as mean ± SEM. Parametric data and median for non-parametric data. Analyses of variance was performed followed by Wilcoxon matched-pairs signed rank test for non-parametric data, respectively. Statistical differences were considered at p-value less than 0.05. In this study, data will be compared between, before and during inhalation.
Data analysis for EEG: raw data were processed by power spectral analysis, and frequency domain data are characterized as slow alpha (8–11 Hz), fast alpha (11–13 Hz), low beta (13–15 Hz), mid beta (15–20 Hz), and high beta (20–30 Hz). This describes the distribution of electrical activity across the brain regions and was produced to show overview activities using GraphPad Prism 8.

Tangerine essential oil has a stimulation effect on the human brain, which is observed by the reduction of slow and fast alpha wave powers and the increase of low beta and mid beta wave powers. Interestingly, alpha and beta wave power were clearly decreased during inhalation of threshold concentration of the oil, indicating the sedative effect of tangerine oil on this level. These results reveal the different effects of the different concentrations of tangerine oil, which may contribute to the concentration-dependent effect of essential oil inhalation. Moreover, the reduction of sleep onset latency was further confirmed by the sedative effect of threshold-level tangerine oil.

We thanks Chitnarong Sirisathitkul for scientific editing and the Research Institute for Health Sciences, Walailak University, for their laboratory supports. 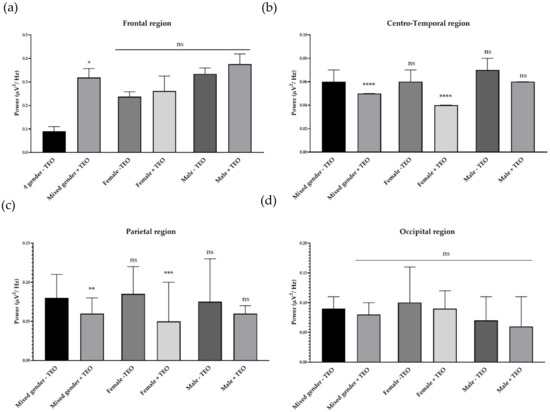 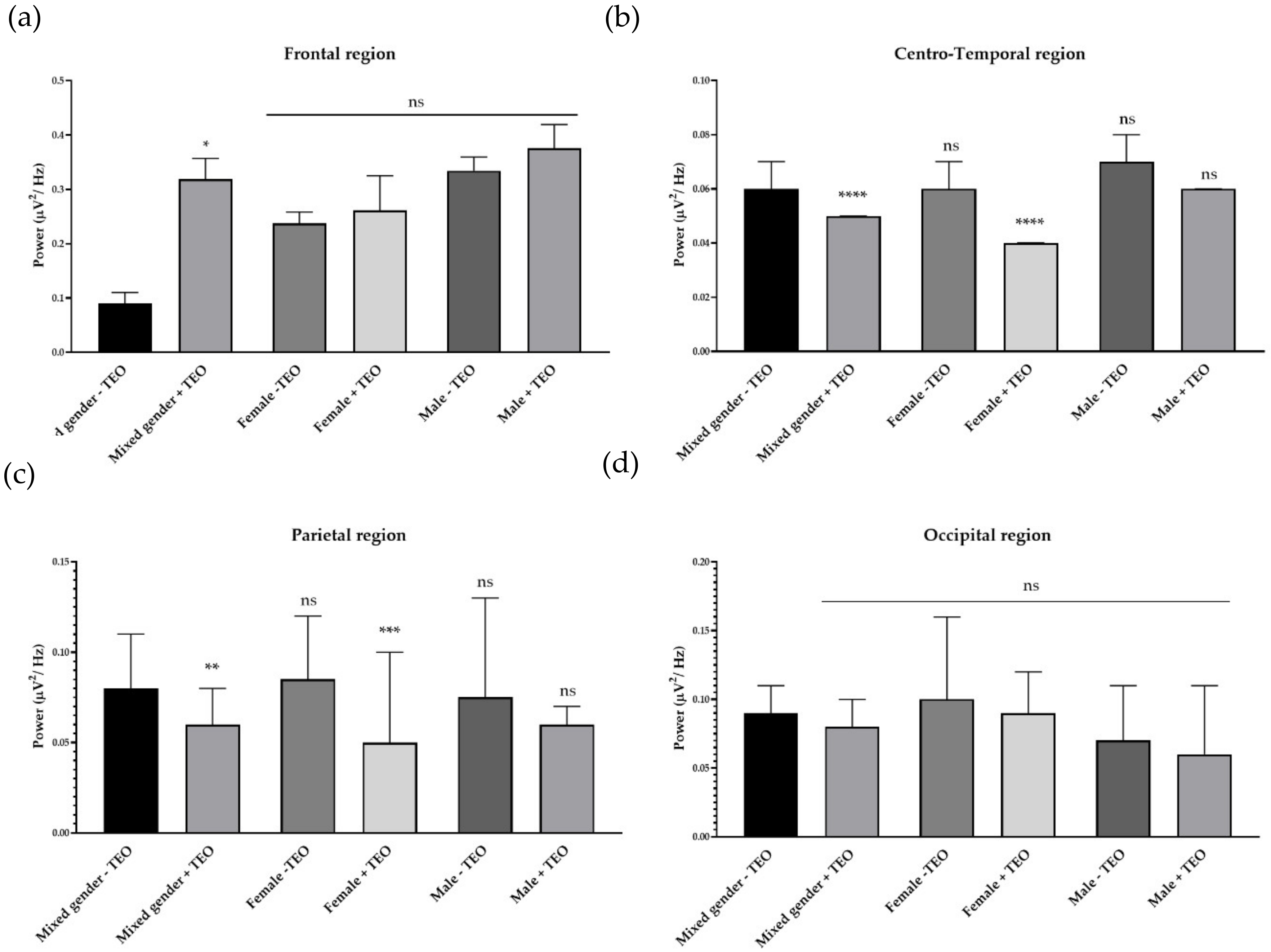 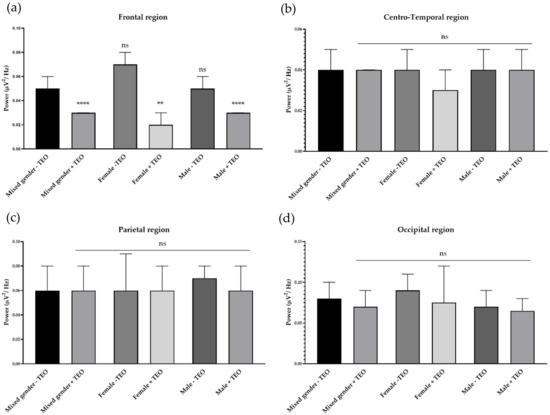 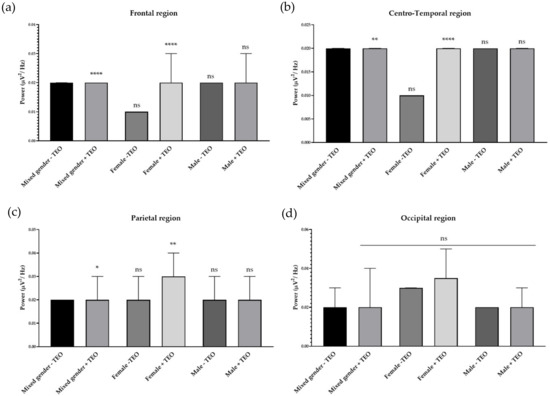 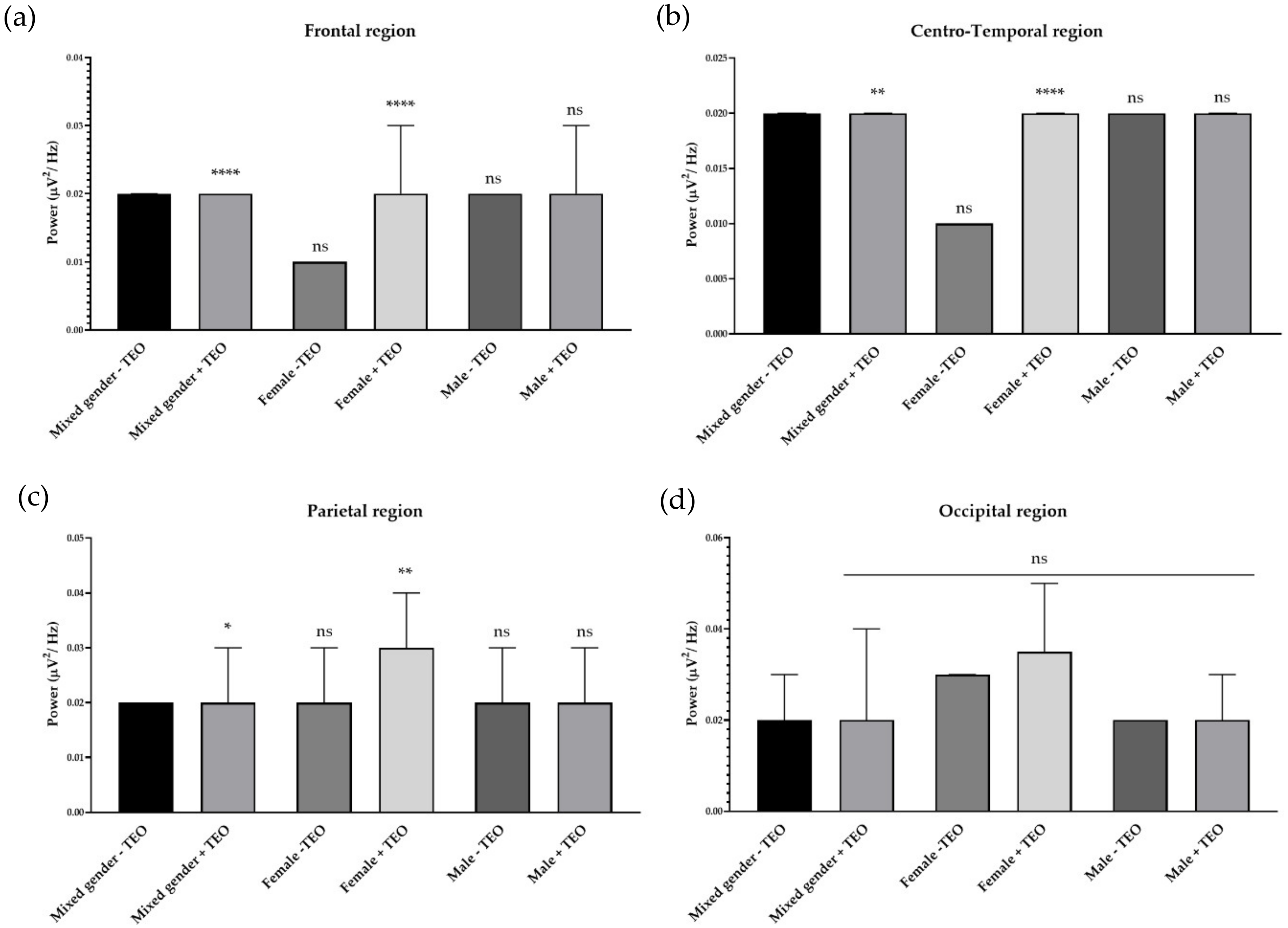 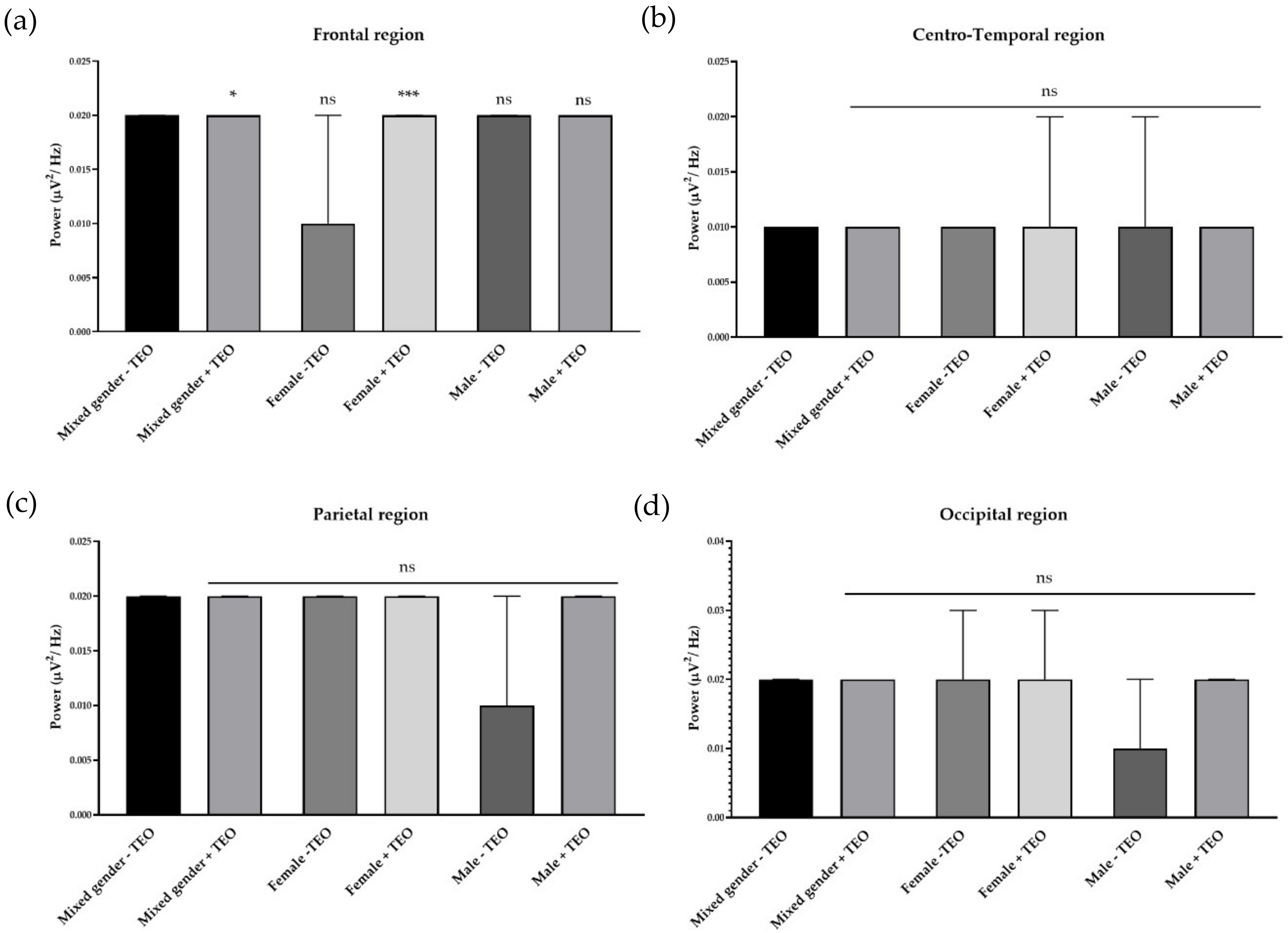 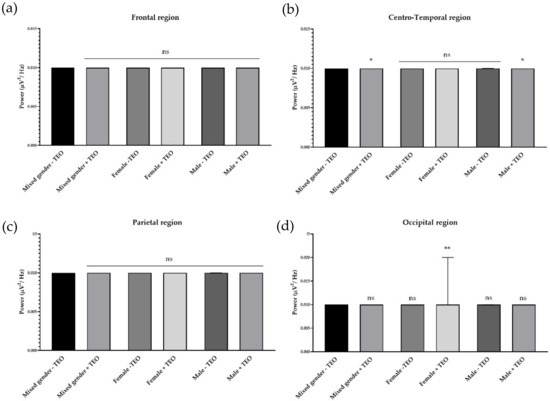 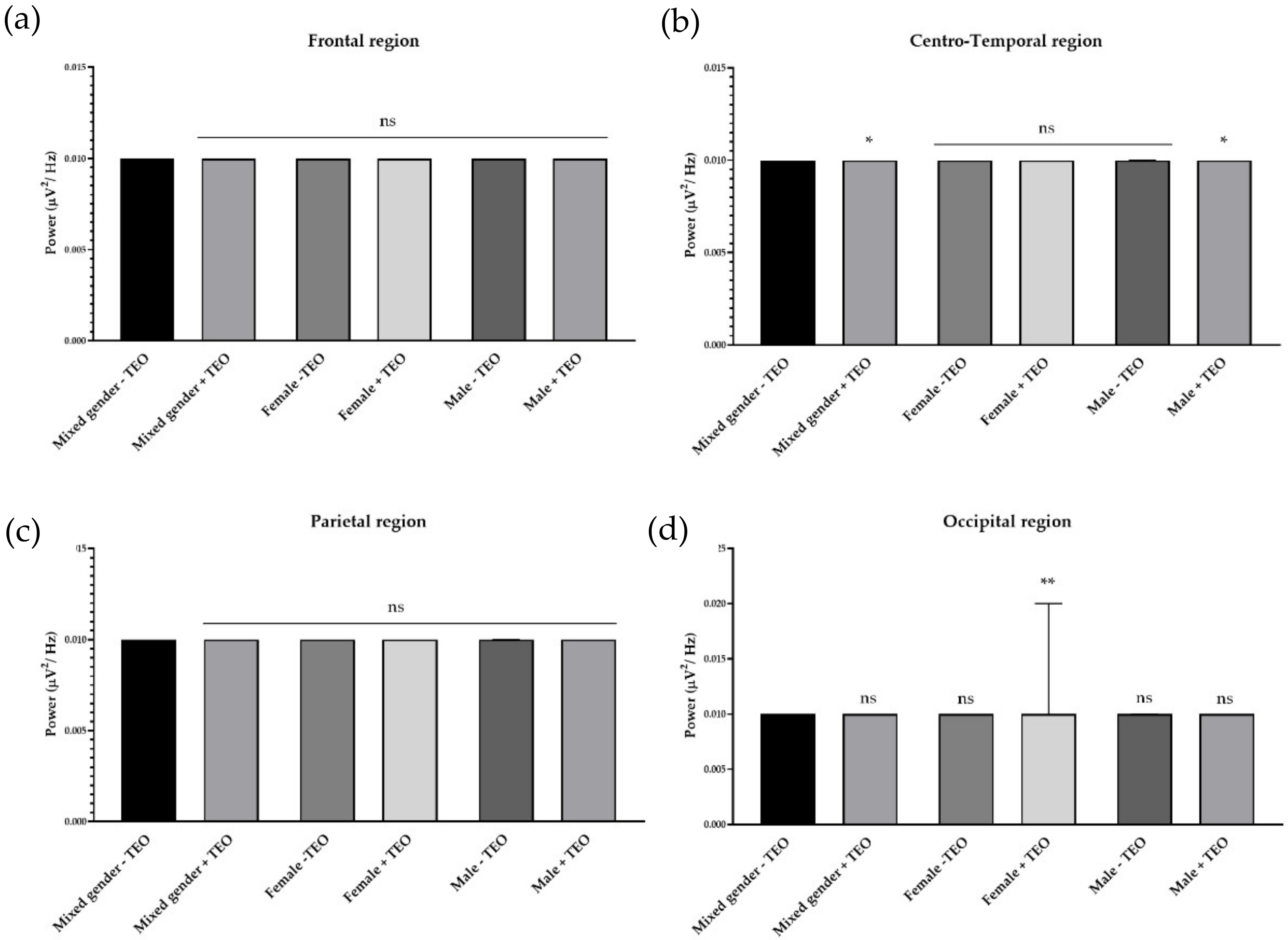