Conventional treatments for chronic periodontitis are less effective in controlling inflammation and often relapse. Therefore, it is necessary to explore an immunomodulatory medication as an adjuvant. Ginsenoside Rb3 (Rb3), one of the most abundant active components of ginseng, has been found to possess anti-inflammatory and immunomodulatory properties. Here, we detected the anti-inflammatory effect of Rb3 on Porphyromonas gingivalis LPS-stimulated human periodontal ligament cells and experimental periodontitis rats for the first time. We found that the expression of pro-inflammatory mediators, including IL-1β, IL-6 and IL-8, upregulated by lipopolysaccharide (LPS) stimulation was remarkably downregulated by Rb3 treatment in a dose-dependent manner at both transcriptional and translational levels. Network pharmacological analysis of Rb3 showed that the mitogen-activated protein kinase (MAPK) signaling pathway had the highest richness and that p38, JNK, and ERK molecules were potential targets of Rb3 in humans. Western blot analysis revealed that Rb3 significantly suppressed the phosphorylation of p38 MAPK and p65 NF-κB, as well as decreased the expression of total AKT. In experimental periodontitis rat models, reductions in alveolar bone resorption and osteoclast generation were observed in the Rb3 treatment group. Thus, we can conclude that Rb3 ameliorated Porphyromonas gingivalis LPS-induced inflammation by inhibiting the MAPK/AKT/NF-κB signaling pathways and attenuated alveolar bone resorption in experimental periodontitis rats. View Full-Text
Keywords: anti-inflammatory agents; chronic periodontitis; ginsenoside; lipopolysaccharides anti-inflammatory agents; chronic periodontitis; ginsenoside; lipopolysaccharides
►▼ Show Figures 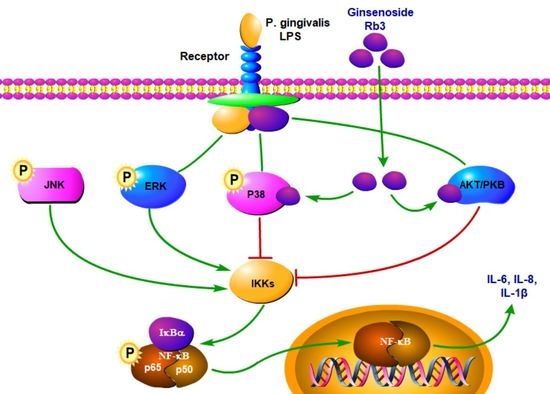