Red raspberries (Rubus idaeus L.) contain appreciable amounts of bioactive (poly)phenol compounds, particularly anthocyanins, ellagitannins and flavan-3-ols [1,2]. Whole red raspberries (RRB) and their (poly)phenol components have been associated with metabolic health, including glucose control, increasing insulin sensitivity, and improving lipid profiles in humans, and reducing fat mass in animal studies [3,4]. Some of these (poly)phenols could be absorbed intact, while majority of them are degraded to products of gut microbial metabolism [5,6,7]. For example, the majority of ellagitannins and oligo- and poly-meric flavan-3-ols escape proximal gastrointestinal (GI) tract absorption and are catabolized in the colon to urolithins and phenyl-γ-valerolactones, respectively, by gut microbiota [7,8]. Inter-individual differences and putative metabotypes of these microbial metabolites have been observed, but their association with metabolic health is not fully understood [8,9].
Fructo-oligosaccharides (FOS) are soluble dietary fibers, and as prebiotics, they are selectively fermented by specific gut microbiota [10]. FOS are naturally present in select fruits and vegetables or produced from beet sugar, frequently used to replace sugars in the formulation of low-sugar food [11]. Animal studies indicate FOS augments (poly)phenolic metabolites generation: adding FOS to a 4-week intake of (poly)phenol concentrate from apple pomace enhanced the hydrolysis of quercetin 3-O-glucoside in rats [12]; and adding FOS to a 4-week strawberry feeding study enhanced urolithins production in rats [13].
Prediabetes (PreDM) is an intermediate stage in the development of type 2 diabetes mellitus (T2DM) that usually co-occurs with a cluster of metabolic risk factors, e.g., insulin resistance, dyslipidemia, hypertension, visceral obesity, and elevated inflammatory markers, leading to substantially increased risk of T2DM and cardiovascular diseases [14]. The Global Burden of Disease study identified low intake of fruit among the top three dietary risks for cardiovascular disease and T2DM [15]. The mechanisms underlying this finding are unknown. Recent studies have observed aberrant gut microbiome structure in PreDM individuals [16,17]. One possible explanation is individuals with PreDM have diminished microbial capacity to metabolize fruit bioactive compounds, such as (poly)phenols, to their respective bioavailable metabolites. It is unclear if regular exposure to fruit (poly)phenols or a combinatorial regimen of fermentable fibers with a (poly)phenol rich fruit would enhance or alter the metabolite milieu.
Therefore, the present study aimed to investigate the effect of supplementing RRB with or without FOS on (poly)phenol metabolism for 4 weeks in at risk group of individuals with prediabetes and insulin resistance (PreDM-IR). Metabolically healthy individuals served as a Reference control group. Our working hypothesis is that the PreDM-IR group will have a distinct (poly)phenolic metabolites profile and supplementing their diets with RRB for 4 weeks will increase microbial-derived (poly)phenolic metabolites and adding FOS will augment the effect. This study was a randomized, single-blinded, two-arm, 4-week, within subject crossover design incorporating a modified pharmacokinetic (PK) multi-sampling protocol with a RRB-based test drink (RRBtest) to assess RRB (poly)phenolic metabolism before and after supplementing the diet for 4 weeks with RRB and RRB+FOS (Figures 1 and 2).

2.3. Plasma and Urine (poly)phenolic Metabolites: Effect of Chronic Exposure to RRB or RRB+FOS

This study was approved by the Institutional Review Board of Illinois Institute of Technology (IIT), Chicago, Illinois and registered with ClinicalTrials.gov (NCT03049631). All subjects provided written informed consent before initiation of any study procedures. The clinical part of study was conducted from May 2017 to February 2018 in the clinical unit of the Center for Nutrition Research (CNRC) at the IIT, Chicago, Illinois.
This study was a randomized, single-blinded, two-arm, 4-week, within subject crossover design incorporating the multi-sampling RRB-based test drink (RRBtest) protocol to assess RRB (poly)phenolic metabolism before and after supplementing the diet for 4 weeks with RRB and RRB+FOS (Figure 1 and Figure 2). Subjects were randomly assigned a supplementation order (RRB → RRB+FOS or RRB+FOS → RRB) separated by a 4-week washout period. Subjects were involved actively in the study for ~14 weeks from screening to completion. During each supplementation period, subjects came to the CNRC weekly to pick up standardized pre-made frozen drinks for daily consumption. At the end of each 4-week period, subjects participated in a “Pharmacokinetic Day (PKD)” visit following an identical protocol as baseline (week 0). Briefly, at each PKD, subjects consumed a RRBtest drink to access the PK profile of RRB (poly)phenols and their metabolites over 24 h. PK profiles after 4-week RRB or RRB+FOS supplementation were compared to baseline data. Each PKD lasted approximately 4.5 h with blood samples collected at 0, 1, 2, 3 and 4 h, urine sample collected at 0, 1, 2, 3 and 4 h, and then a final blood and urine sample the next morning (24 ± 1 h) calculated from the time of the RRBtest drink the day prior.

Men and women 20 to 60 years old were recruited from the greater Chicago land area and screened for participation at the CNRC/IIT. Subjects were required to meet general eligibility criteria and specific criteria for PreDM-IR. Specific PreDM-IR criteria included impaired fasting glucose (≥5.6 mmol/L and <7.0 mmol/L), elevated fasting insulin (>50th percentile cutoff) [32], and insulin resistance measured by homeostatic model assessment of insulin resistance, HOMA-IR ≥ 2 [31]. The Reference/Control group had fasting glucose values ≤ 5.6 mmol/L and a HOMA-IR value ≤ 1 [31]. General eligibility criteria for individuals to participate in the study were: non-smoker and not taking any medications that would interfere with outcomes of the study (i.e., lipid-lowering, anti-inflammatory, or glucose-interfering medications or dietary supplements), no known allergy or intolerance to berries, did not consume ≥3 servings of berries per week, and had no documented atherosclerotic disease, inflammatory disease, –GI or kidney disease, diabetes mellitus, or other systemic diseases. Women who were pregnant or lactating were not eligible to participate.

Upon enrollment into the study, subjects had a diet stabilization period before starting the research protocol, which started with a low-(poly)phenol diet 3 days before the each PKD visit. In between PKD visits, subjects were counseled to keep low-berry diet (<3 servings of berries per week, except the experimental drinks), and maintained their usual dietary and physical activity patterns. Dietary intake data (24 h recalls) were collected and analyzed using the Automated Self-Administered 24 h (ASA24) Dietary Assessment Tool, version (2017), developed by the National Cancer Institute (Bethesda, MD, USA) [33]. Compliance to the diet and lifestyle restrictions was determined via ASA24 and via interview once per week. A fixed dinner meal was provided on the day before each PKD visit and the night of PKD visits to maintain consistency for the 24 h follow-up visit.
Subjects arrived at the CNRC in a fasting state (10–12 h, confirmed by finger stick) and well hydrated on the morning of each scheduled PKD visit. After assessing PKD readiness based on protocol compliance (i.e., dietary restrictions and fasting), anthropometrics, body composition and vital signs were measured. An intravenous catheter was placed in subjects’ non-dominant arm by a licensed health care professional. Fasting blood and urine samples were collected (0 h), and subjects were provided with the RRBtest drink. Subsequently blood samples were collected at 0.5, 1, 2, 3, 4, and 24 h and urine samples were collected at 1, 2, 3, 4, and 24 h. After the 4-h blood collection, the catheter was removed and subjects were evaluated for safety before leaving the CNRC. Subjects consumed the fixed lunch and dinner meals at home and returned the next morning (fasted, well hydrated) for the 24 h blood and urine collection to complete the PKD visit. Females of reproductive age were studied avoiding menstruation phase of their menstrual cycle.

During the supplementation periods, ASA24 was completed by subjects once per week to record all food and drink consumed in the past 24 h. The total calorie, fat, protein, carbohydrate, sugar, fiber, vegetable amount, and fruit amount were calculated based on the ASA24 reports and analyzed with SAS 9.4 (SAS Institute, Inc., Cary, NC, USA). Background diets did not change significantly during the study periods (Table S3).

4.7. Plasma and Urine Samples Processing and Analysis by UHPLC-QQQ

The areas under the 24 h curve of (poly)phenolic metabolites (AUC0–24h) after each RRBtest drink was determined using the trapezoidal rule using Microsoft excel [19]. The time (Tmax) to achieve maximum plasma concentration (Cmax) were also evaluated. Randomization schedules, sample size estimates, and data analyses were performed using SAS 9.4 (SAS Institute, Inc., Cary, NC, USA).
Normal distribution of data was examined via the Shapiro-Wilk test. Non-normal distributed data were log10 transformed for analysis to normalize distributions. Data obtained at Baseline/Week 0 were used for subject characteristics. Repeated measures analysis of variance using mixed procedure was used for all endpoints assessing main effects of metabolic health status (PreDM-IR vs. Reference), Supplementation (baseline vs. RRB vs. RRB+FOS), Time (0, 1, 2, 3, 4, 24 h), and their 2-way interactions. Covariates (age, BMI, gender and race) were tested in all models and significant covariates were included in final analyses. These terms were removed from the model if not significant. When significant main effects and/or interactions were observed, post-hoc mean-separation testing was conducted using the Tukey-Kramer correction to adjust for multiple comparisons. Results are presented as means ± standard errors of the mean (SEM). Two-tailed p < 0.05 was considered significant.

The results from this study indicate the importance of gut microbiota in (poly)phenol metabolism, with microbial metabolites accounting for over 99% (poly)phenol metabolites in plasma and urine. Nutritional strategies incorporating RRB and FOS regularly in the diet increased microbial metabolites of (poly)phenols in the blood that were mostly lower in the PreDM-IR group compared to Reference group. These data suggest alterations in the capacity of the gut microbiome of individuals with PreDM-IR to metabolize and render bioavailable raspberry-derived (poly)phenols, but can be enhanced when consumed regularly for 4 weeks. The clinical importance of these findings is the subject for future work.

Conceptualization, methodology, investigation, writing—original draft preparation, writing—review and editing, funding acquisition, X.Z., A.S., I.E. and B.M.B.-F. All authors have read and agreed to the published version of the manuscript.

This research was funded by the National Processed Raspberry Council.

The clinical trial and sample analysis were conducted at CNR and Department of Food Science and Nutrition, IIT. Special thanks to the volunteers participating in the study and all the staff and students helping on this project. 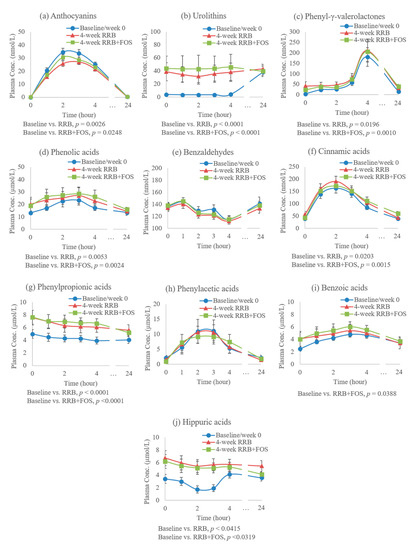