Background and objectives: Common variable immunodeficiency (CVID) is the most prevalent antibody impairment. It is characterized by failure in immunoglobulin and protective antibody generation and defined by an increased tendency toward bacterial infections, autoimmunity, and malignancy. Most CVID diagnoses do not follow a classical Mendelian pattern of inheritance. In recent years, CVID has been considered an epigenetic phenomenon in the majority of cases, overtaking previous monogenetic and/or polygenetic theories. The aim of this study was to review the role of microRNAs (miRNAs) in CVID, focusing on the involvement of the same miRNAs in various non-infectious clinical complications of CVID, mainly autoimmunity and/or cancer. Materials and Methods: A bibliographic search of the scientific literature was carried out independently by two researchers in scientific databases and search engines. The MeSH terms “microRNAs” and “common variable immunodeficiency” were used. All research articles from inception to May 2020 were considered. Results: The literature data showed the involvement of two miRNAs in primary immunodeficiency: miR-142 and miR-155. Both of these miRNAs have been investigated through mice models, in which miR-142 and miR-155 were deleted. These knock-out (KO) mice models showed phenotypic analogies to CVID patients with hypogammaglobulinemia, adaptive immunodeficiency, polyclonal proliferation, lung disease, and enteric inflammation. miR-142 and miR-155 have been found to be involved in the following autoimmune and neoplastic clinical complications of CVID: Gastric cancer, gastric mucosa-associated lymphoid tissue (MALT) lymphoma, natural killer/Tcell lymphoma (NKTCL), and immune thrombocytopenia. Conclusions: miR-142 and miR-155 deregulation leads to similar CVID phenotypesin KO mice models. Although no data are available on the involvement of these miRNAs in human CVID, their dysregulation has been detected in human CVID comorbidities. The literature data show that miRNA sequences in murine models are comparable to those in humans; therefore, miR-142 and miR-155 involvement in human CVID could be hypothesized. View Full-Text
Keywords: common variable immunodeficiency; microRNAs; miR-142; miR-155; autoimmunity; cancer common variable immunodeficiency; microRNAs; miR-142; miR-155; autoimmunity; cancer
►▼ Show Figures 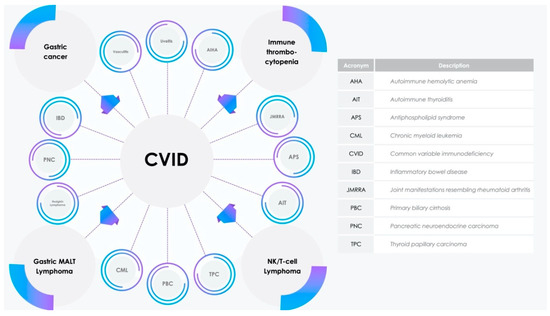