Alzheimer’s disease (AD) is a global health challenge, and the number of patients with AD has been increasing worldwide [1]. It is expected that the number of AD patients will continue to increase with the aging of the world population, and it is estimated that the number will reach 115 million by 2050 [1]. Patients with AD have reduced activity of acetylcholine, deposition of amyloid β and a decrease in the revel of nerve growth factor (NGF) in the brain, but the exact cause of AD has not been clarified [2]. Acetylcholinesterase inhibitors are used for relieving symptoms in AD patients. However, the effects of treatment with these inhibitors are transient and moderate [3]. Therefore, new radical treatments for AD have been needed.
It is thought that NGF is the key to amelioration of cognitive function since NGF supports survival, differentiation and maintenance of neurons [4]. It was reported that hippocampal NGF levels were reduced in aged rats [5]. It was also reported that continuous infusion of NGF to the brain can improve retention of spatial memory in behaviorally impaired elderly rats [6]. The results of those studies suggest that NGF administration might be effective for improving the condition of AD patients. However, the application of NGF as a medicine for AD is difficult because NGF cannot pass through the blood–brain barrier (BBB) due to its physicochemical properties [7,8]. To solve this problem, considerable efforts have been made to find low-molecular-weight and lipophilic compounds that have neurotrophic properties similar to those of NGF and can pass through the BBB [8]. It has been reported that lindersin B, a lipophilic triterpenoid that was isolated from Lindernia crustacea, induced neurite outgrowth in PC12 cells [9]. It was also reported that isofuranodiene, which is the major constituent of essential oil of wild celery (Smyrnium olusatrum L., Apiaceae), has neurite outgrowth-promoting activity in the presence of NGF in PC12 cells [10]. These compounds with NGF-mimicking or NGF-enhancing effects are likely to be able to pass the BBB since they are low-molecular-weight and lipophilic compounds. Hence, it is speculated that the use of low-molecular-weight and lipophilic compounds with NGF-mimicking or NGF-enhancing activity is an effective approach for AD treatment.
Plant seeds are rich in oil and are used as foods worldwide. Sunflower (Helianthus annuus L.) seeds are nutritious and are used as cooking oil and as roasted or salted snacks. It was reported that administration of oil obtained from sunflower seeds increased the amount of phosphatidylcholine in the rat brain [11]. Phosphatidylcholine is used as a material for myelin-supporting synapse formation [12]. Also, acetylcholine, a neurotransmitter, is synthesized from phosphatidylcholine to help transmission of information and improvement of memory in the brain [13]. Phosphatidylcholine is synthesized in neuronal cells during neurite outgrowth [14,15], and a lack of phosphatidylcholine induces apoptosis in PC12 cells [16,17]. Accordingly, it has been considered that ingestion of phosphatidylcholine would improve cognitive function and prevent dementia [18]. Despite reports of these effects, NGF-mimicking or NGF-enhancing activity of sunflower seeds has not been investigated.
This study aims to isolate and identify compounds showing neurite outgrowth-promoting activity, which is an NGF-enhancing effect, from sunflower seed extract. Active compounds were purified by activity-guided fractionation and analyzed by proton nuclear magnetic resonance (1H-NMR) and gas chromatography-mass spectrometry (GC-MS). Herein, the purification and identification of compounds showing neurite outgrowth-promoting activity, and the structure–activity relationship of related compounds, are reported. In addition, it is shown that the promoting activity of the most potent compound is neurite formation with expression of neurofilaments.

2.1. Isolation of β-Sitosterol from Sunflower Seeds

Sunflower seeds (164.69 g) were extracted with acetone-methanol (8/2, v/v), and the extract showed neurite outgrowth-promoting activity in the presence of NGF or dibutyryl cyclic AMP (Bt2cAMP) in PC12 cells (Figures S1 and S2 in the Supplementary Materials, published with this article online). NGF binds to the tropomyosin receptor kinase A receptor and extends neurites via a signaling cascade that includes extracellular signal-regulated kinase (ERK) [19,20]. As another signal pathway, NGF increases intracellular cAMP concentration, which induces neurite formation [21]. Bt2cAMP, which is a membrane-permeable cAMP derivative, is metabolized intracellularly to cAMP and shows a neurite formation effect [22]. Therefore, in order to efficiently evaluate the neurite outgrowth-promoting activity in a short time and to purify the active compounds, Bt2cAMP was applied as a neurite formation inducer in PC12 cells.
The sunflower seed extract was separated between hexane and methanol after concentration, and then the hexane layer was chromatographed on a Wakogel C-200 column twice and on a TOYOPEARL HW-40F, by active-guided fractionation, to obtain a white powder (123.1 mg). It was thought that the white powder was a sterol compound since the 1H-NMR data of the white powder were similar to those of β-sitosterol in previous reports [23,24,25] (Figure 1). However, the 1H-NMR spectrum of the purified compound contained small signals on δ 4.9–5.2, which were not observed in the 1H-NMR spectrum of β-sitosterol. The signals at δ 5.00 and δ 5.14 seemed to be consistent with two characteristic signals of trans-olefinic protons at the C22 and C23 positions of stigmasterol. The integral value of the signals that are thought to be derived from two protons at the C22–C23 positions of stigmasterol was 0.36, whereas the integral value of the signal of a proton at the C6 position on sterols was 1.00 (Figure 1). The 1H-NMR data suggested that the purified fraction was a mixture of β-sitosterol and stigmasterol, which contained β-sitosterol as the main compound.
To clarify the ingredients of the fraction, the fraction showing neurite outgrowth-promoting activity in the presence of Bt2cAMP in PC12 cells was analyzed by GC-MS. The GC-MS data indicated that the active fraction was a mixture of three compounds (compounds 1, 2 and 3) and that the retention times of compounds were approximately 16.2, 16.5 and 17 min, respectively (Figure 2a). The retention times of compounds 1, 2 and 3 were in good accordance with those of the standards of campesterol, stigmasterol and β-sitosterol, respectively (Figure 2a). In addition, the molecular ions and fragment ions of compounds 1, 2 and 3 agreed fairly well with those of the standards of campesterol, stigmasterol and β-sitosterol, respectively (Figure 2b). GC-MS also showed that the peak-area ratio of campesterol, stigmasterol and β-sitosterol was about 1:2:7 (Figure 2a). Therefore, these results showed that the fraction was a mixture of β-sitosterol, stigmasterol and campesterol, the main component of which is β-sitosterol.
The 1H-NMR and GC-MS data allowed unequivocal identification of these compounds, β-sitosterol, stigmasterol and campesterol, in the purified active fraction. The identification of these compounds was supported by a report of the material composition in sunflower oil [26]. β-Sitosterol, stigmasterol and campesterol are well-known compounds, and it was previously reported that these compounds, which are phytosterols, are abundant in plants, fruits and seeds [27,28,29]. It was reported that a phytosterol was effective for lowering low density lipoprotein cholesterol in patients with type 2 diabetes [30]. It was also reported that the amount of phytosterols intake was associated with improved survival in hypertensive rats [31]. However, neurite outgrowth-promoting activities of these compounds have not been reported.

2.2. Promoting Activity of Sterols in Neurite Formation Induced by Bt2cAMP in PC12 Cells

2.3. Promoting Activity of β-Sitosterol on Neurite Formation Induced by NGF in PC12 Cells

PC12 cells were purchased from RIKEN BRC Cell Bank (Tsukuba, Japan). PC12 cells were grown in RPMI-1640 supplemented with 10% HS, 5% FBS, 100 U/mL penicillin G and 100 μg/mL streptomycin at 37 °C in a humidified atmosphere of 95% air/5% CO2. Samples were dissolved in DMSO (final concentration: 0.5%), and then diluted with the basal culture medium. PC12 cells from stock cultures were suspended in the medium and plated at 4.0 × 103 cells/90 μL/well (for evaluation in the presence of Bt2cAMP) or 2.0 × 103 cells/90 μL/well (for evaluation in the presence of NGF) in 96-well plates coated with collagen and incubated in a humidified atmosphere of 5% CO2 at 37 °C. After 24 h, 5 μL of Bt2cAMP at 10 mM (final concentration: 0.5 mM) or NGF at 200 ng/mL (final concentration: 10 ng/mL) and 5 μL of each sample (final concentration of sterol compounds: 0.05–5 μM) or control (medium only) were added to the culture medium. At 24 h after the addition of Bt2cAMP and samples, or at 48 h after the addition of NGF and samples, the medium was aspirated, and PC12 cells were fixed with phosphate buffer (pH 7.2, 100 mM) containing 1% glutaraldehyde solution and stained by giemsa stain solution. Then, the 96-well plates were washed twice with Milli-Q grade water. The number of cells bearing neurites longer than twice the diameter of one cell body after treatment was divided by the total number of cells, which amounted to 300–400 cells per well.

This research was financially supported in part by Laimu Co., Ltd. 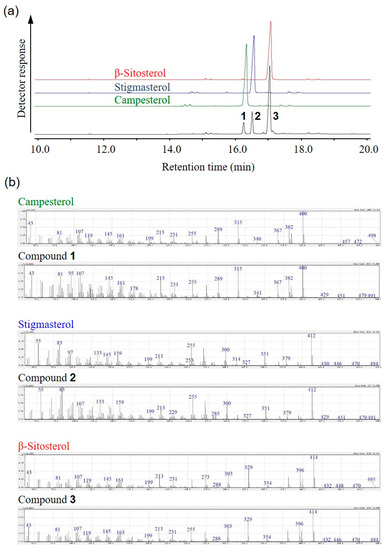 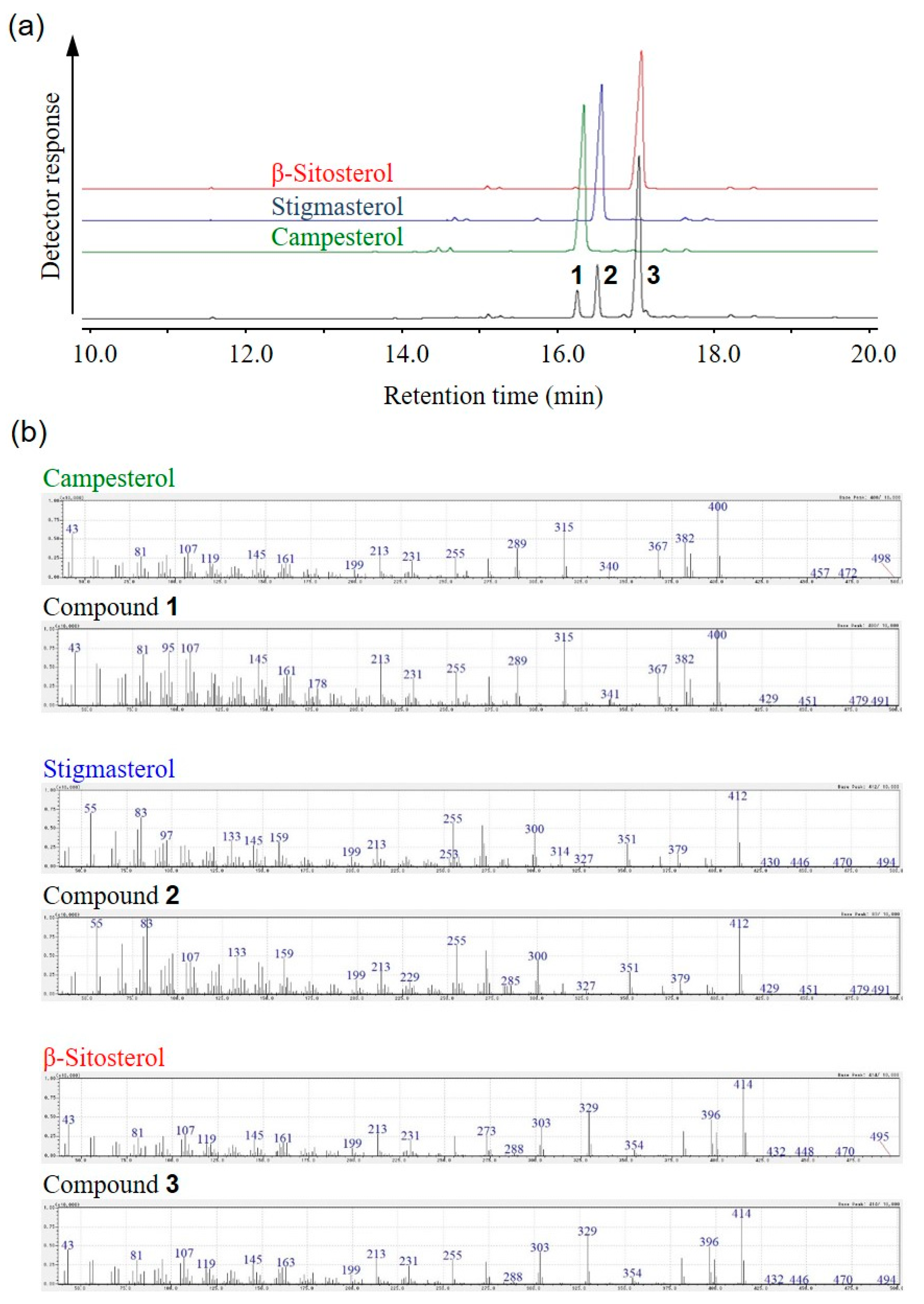 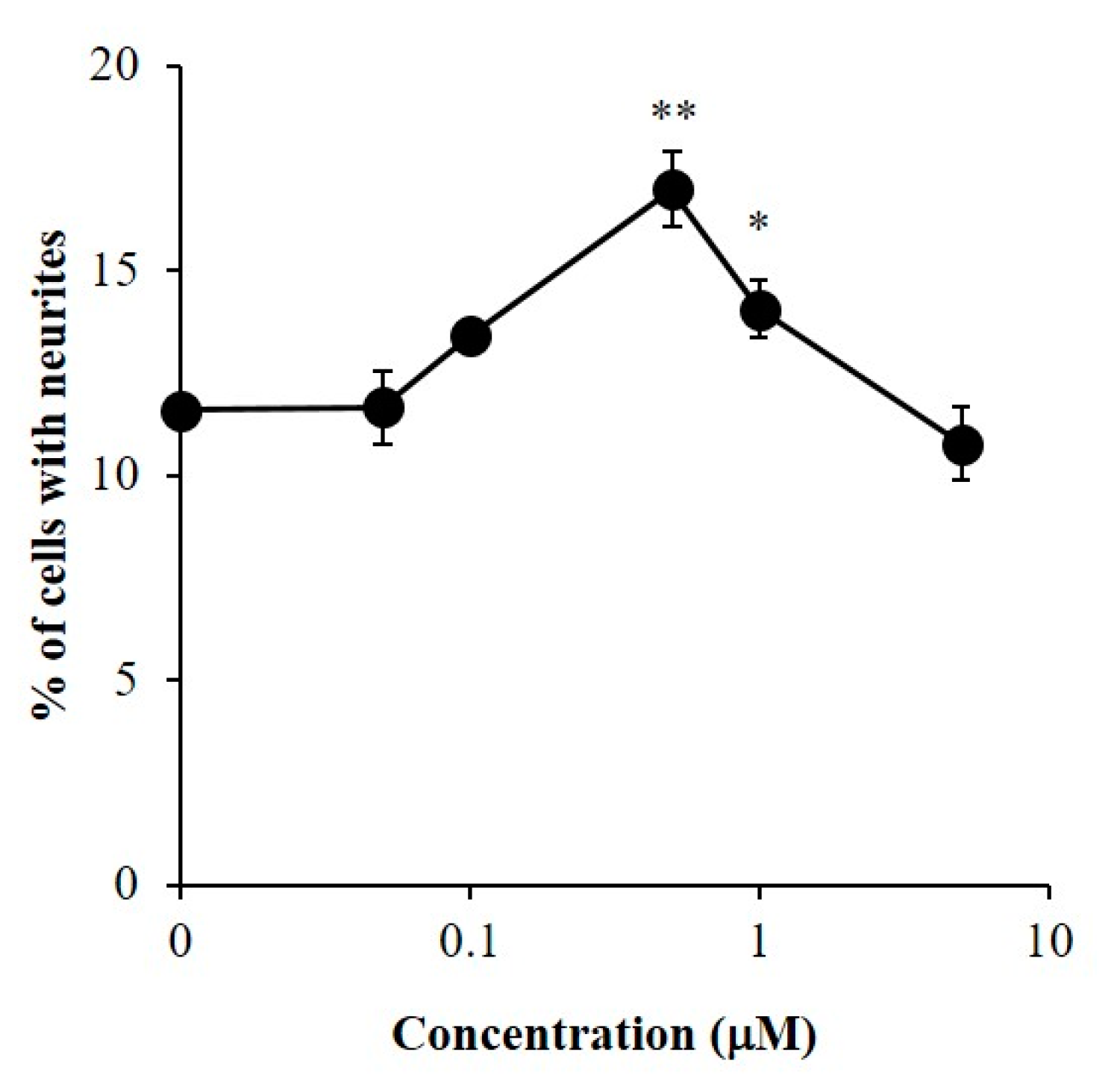 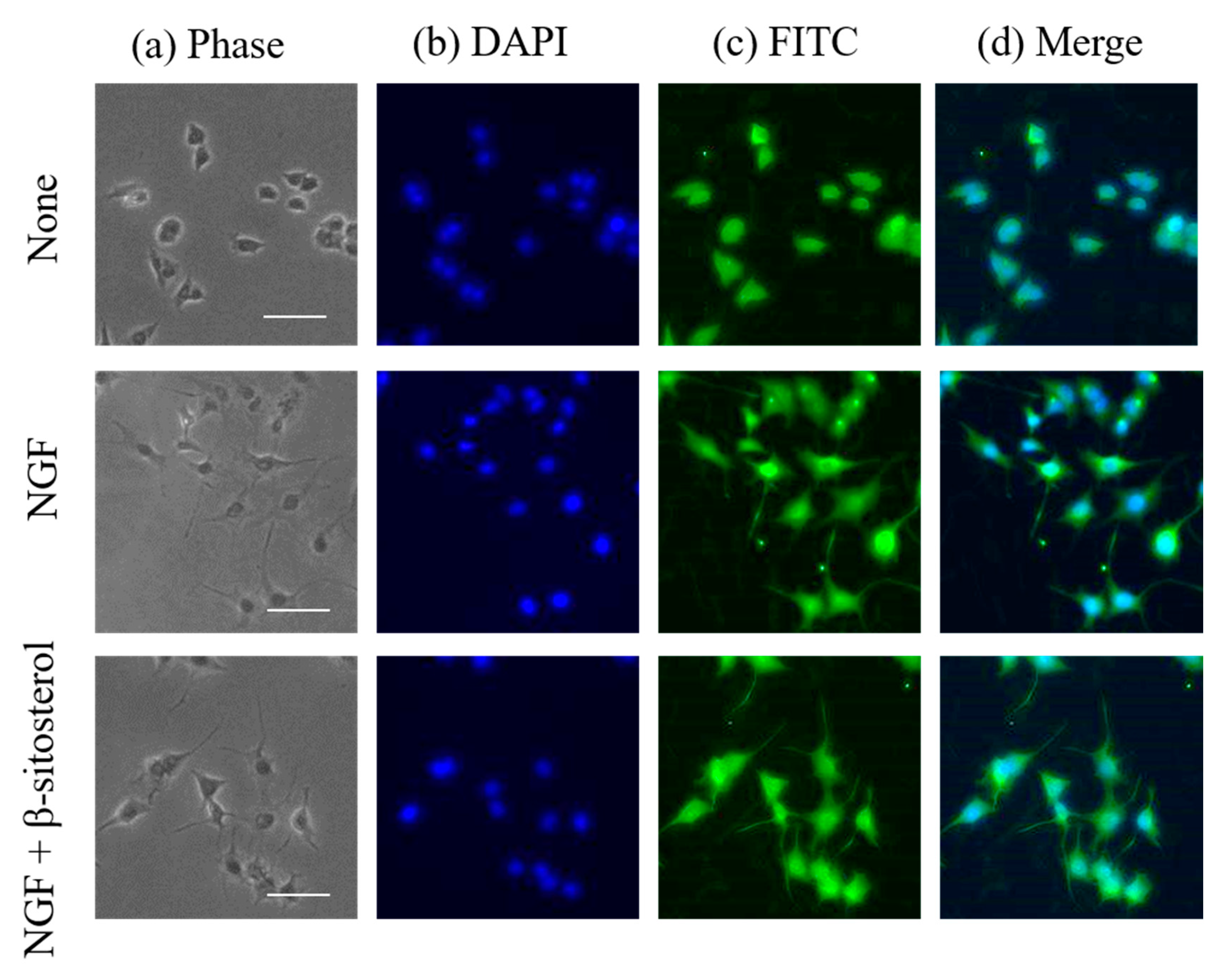