Ischemia/reperfusion injury is a severe disorder associated with a high mortality. Several antioxidant and pharmacological properties of cashew nuts (Anacardium occidentale L.) and its metabolites from different countries have recently been described. It is a medicinal plant with important therapeutic effects. This study aimed to verify the effect of an oral administration of cashew nuts in a rat model of ischemia/reperfusion (I/R). Adult male rats were subjected to intestinal I/R injury by clamping the superior mesenteric artery for 30 min and then allowing animals to 1 h of reperfusion. Rats subjected to I/R of the gut showed a significant increase in different biochemical markers. In particular, we evaluated lipid peroxidation, tissue myeloperoxidase activity, protein carbonyl content, reactive oxygen species generation and decreased antioxidant enzyme activities. Western blot analysis showed the activation of the NRF2 and NF-kB pathways. Increased immunoreactivity to nitrotyrosine, PARP, P-selectin, and ICAM-1 was observed in the ileum of rats subjected to I/R. Administration of cashew nuts (100 mg/kg) significantly reduced the mortality rate, the fall in arterial blood pressure, and oxidative stress and restored the antioxidant enzyme activities by a mechanism involving both NRF2 and NF-kB pathways. Cashew nuts treatments reduced cytokines plasma levels, nitrotyrosine, and PARP expression as well as adhesion molecules expressions. Additionally, cashew nuts decreased the intestinal barrier dysfunction and mucosal damage, the translocation of toxins and bacteria, which leads to systemic inflammation and associated organs injuries in particular of liver and kidney. Our study demonstrates that cashew nuts administration exerts antioxidant and pharmacological protective effects in superior mesenteric artery occlusion–reperfusion shock.
Keywords: medicinal plants; cashew nuts; antioxidant medicinal plants; cashew nuts; antioxidant

Intestinal ischemia/reperfusion (I/R) is a severe event induced by trauma, mesenteric ischemia, sepsis shock, and surgical procedure. It caused increased intestinal permeability and leads to the release of abundant bacteria and their antigens into mesenteric lymph and circulation producing multiple organ dysfunction syndrome (MODS) and systemic response syndrome (SIRS) [1,2]. Although several evidences characterize the pathogenesis of intestinal injury and the related organ dysfunction, the underlying mechanisms still remain the subject of examination, and no effective therapeutic tools control or prevent the process. Oxidative stress has a critical part during intestinal I/R injury. Reactive oxygen species (ROS) are overproduced in injured cells and tissues following I/R injury, triggering to necrosis or apoptosis, amplifying pro-inflammatory response, and destroying the gut mucosal barrier [3]. The endothelial dysfunction produced by the injury recruits polymorphonuclear leukocytes to the lesion site involving a complex system of adhesion molecules [4,5]. Neutrophil activation in turn activates a large production of superoxide anions (O2−) [4], lipid peroxidation and oxidation [6], and DNA single-strand damage [7]. Moreover, O2− interacts with NO forming peroxynitrite (ONOO−), a potent proinflammatory and cytotoxic molecule [8]. Nuclear factor E2-related factor 2 (Nrf2) pathway is described to have a critical role in the pathogenesis of I/R injury [9]. It and its target genes are considered as multiple-organ protector thanks to the cytoprotective and antioxidative functions [10]. In particular, Nrf2 increased expression has been described to protect epithelial barrier function and gut inflammation [11,12]. Intake of fresh fruit, polyphenol-rich food, and vegetables is important to fight the oxidative effect of radical oxygen species (ROS) [13]. Nowadays, medicinal plants are widely used to treat different medical conditions. Numerous preclinical and clinical reports described the antimicrobial and antioxidant properties of plant compounds and their by-products [14]. Anacardium occidentale L. is a medicinal plant with important therapeutic effects [15]. In particular, for the different parts of the plant, such as stem, flowers, leaves, and fruits, different pharmacological functions have been described [16]. Additionally, the secondary metabolites included in the parts of the plants such as carotenoids, vitamin C and polyphenols, display great antioxidant effects. Among them, the most representative compounds were p-hydroxybenzoic, protocatechuic and gallic acids as well as aglycone and glycosylated flavonoids such as quercetin, myricetin, kaempferol and naringenin [17]. However, it is important to underline that tree from different countries has different chemical compositions. In this study for the first time, we evaluated the chemical composition and the antioxidant effects of the cashew nuts (Anacardium occidentale L.). Recent studies showed that the cashew nuts have cardioprotective properties [18], have cholesterol-lessening effect [19], and decrease the inflammatory mediators [20]. In particular, cashew nuts have elevated nutritional importance: they can modulate risk of cardiovascular issues, metabolic syndrome [21], chronic inflammatory bowel disorders [15], and painful degenerative joint disease [22]. The positive effects of natural antioxidant compound such as bergamot juice [23], glycyrrhizin [24], green tea [25], Himanthalia elongata [26], thymoquinone, and melatonin [27] have been also described. Accordingly, our study evaluated the effect of the oral treatment of cashew nuts from Coted’Ivoire in an experimental rat model of gut ischemia/reperfusion injury.

Table 1 reports the nutritional profile of cashew kernel samples from Ivory Coast (Africa). In agreement with the chemical composition of West Africa cashew [15], cashews contain a high proportion of lipid (44.19%), followed by carbohydrate (35.43%) expressed as sum of soluble sugars and fiber and protein (22.46%). The total phenolic content, expressed as mg/100 g of sample, was higher (80.01) compared to what was reported in our previous work for West Africa cashews (69.64) [22].

The moisture content of cashew samples (10 g) was estimated according to the Association of Official Analytical Chemists (AOAC) Official Method 925.40 (1995) [49]. The results of moisture content are expressed as percentage of fresh weight.

Total nitrogen in cashew samples (0.1 g) was determined by micro-Kjeldahl according to the AOAC method 950.48 (1995) [49]. Protein content was calculated as N × 6.25 and expressed as a percentage fresh weight.

Lipid extraction of cashew samples (10 g) was performed using a Soxhlet apparatus according to the AOAC Official Method 948.22 (1995) [49]. The results are expressed as percentage of fresh weight.

Dietary fiber content of cashews (1 g) was determined according to the AOAC Official Method 985.29 (1997) [50]. Results are expressed as percentage of fresh weight.

The soluble sugar content of cashew samples was detected according to the method developed by Dubois et al. (1956) and modified by Agrawal et al. (2015) [51,52].

Ash determination of cashew samples (5 g) was carried out according to the AOAC Official Method 923.03 (1995) [49]. Ash content was expressed as percentage of fresh weight.

A cashew extract was prepared as described by [53] with some modifications. Briefly, 10 g of cashews was extracted three times with 20 mL of n-hexane (Merck, Darmstadt, Germany) for 6 h under agitation in order to discard the fat. After filtration, the residue was mixed with 100 mL of methanol/HCl (Merck, Darmstadt, Germany) 0.1% (v/v), sonicated for 15 min, and centrifuged (5000× g, 10 min, 4 °C). The extraction was repeated twice, followed by concentration of the methanol fraction in a rotary evaporator. The residue was then dissolved in Milli-Q water (40 mL) and extracted four times with 40 mL of ethyl acetate (Merck, Darmstadt, Germany). After combining the organic phases, Na2SO4 was used for 20 min to dry them.

The total phenolic content was determined according to the Folin–Ciocalteu method described by [24] with some modifications. Briefly, 50 µL of sample was added to Folin–Ciocalteu reagent (500 µL) followed by deionized water (450 µL). After 3 min, 500 µL, 10% w/v of sodium carbonate (Sigma-Aldrich, Milan, Italy) was added and samples were left in the dark at room temperature for 1 h, vortexing every 10 min. Absorbance was measured at 785 nm using a UV–Vis spectrophotometer (Shimadzu UV-1601, Kyoto, Japan). Results are expressed as milligram of gallic acid equivalents (GAE)/100 g of fresh weight.

Male rats (Sprague–Dawley (200–230 g, Envigo, Milan, Italy)) were employed in this research. Animals were located in the University of Messina, and all experiments were conducted there. The University of Messina Review Board for animal care (OPBA) approved the study. All animal experiments agree with the new Italian regulations (D.Lgs 2014/26), EU regulations (EU Directive 2010/63), and the ARRIVE guidelines.

Cashew nuts (100 mg/kg body) were administered for 3 consecutive days through gavage. After the treatment schedule, the rats were fasted for 12 h. The induction of intestinal ischemia and reperfusion injury was performed as already described [34]. After anesthesia induction and midline laparotomy, ischemia and reperfusion injury were induced by clamping the superior mesenteric artery. After 30 min, the vascular clamp was removed allowing animals to 1 h of reperfusion. During the whole process, the body temperature of the rats was maintained at 37.5 °C, using a heating lamp. After this time, animals were sacrificed and tissues were harvested for histological and biochemical analyses. In another set of experiments, following reperfusion, the various groups of animals were observed for 4 h to evaluate survival differences [25].

Rats were randomly divided into the following groups:
(1) I/R + vehicle (saline): rats treated with vehicle and subjected to the surgical procedure described above;
(2) I/R + cashew nuts (100 mg/kg): rats treated with cashew nuts (100 mg/kg) and subjected to the surgical procedure described above;
(3) SHAM groups. animals were operated with surgical steps; however, they were not subjected to I/R and were treated with either vehicle or cashew nuts.
The tested dose was chosen based on previous studies performed in our laboratories [15,22].
In another set of experiments, we used melatonin as positive control (10 mg/Kg) [24,25,54].

Myeloperoxidase (MPO) activity, an indicator of PMN accumulation, was determined spectrophotometrically at 650 nm [56].

Protein carbonyl content (PCC) was evaluated spectrophotometrically at 370 nm by the reaction between 2, 4-Dinitrophenylhydrazine and carbonyl group [57]. The results were expressed as nanomoles of carbonyl per milligram of protein.

Ileum tissues were homogenized, and the supernatants were collected for determining total glutathione (Glutathione Assay Kit; Trevigen Inc., Gaithersburg, MD, USA). The results of GSH levels were expressed as nanomole per milligram of protein [34]. SOD activity was determined on ileum tissue homogenate according to the principle of nitro blue tetrazolium reduction assay [58]. The superoxide dismutase (SOD) activity is expressed as U/mg of protein. The catalase (CAT) activity was estimated by decreased in absorbance of H2O2 at 240 nm [59]. The GPx was performed as described [34]. Oxidized glutathione (GSSG) is reduced by glutathione reductase and NADPH. The oxidation of NADPH to NADP + is evaluated by decrease in absorbance at 340 nm. GPx activity is expressed as U/mg of protein. The glutathione-S-transferase (GST) activity was determined spectrophotometrically at 340 nm [34]. 1 U = amount of enzyme producing 1 mmol of CDNB-GSH conjugate/min.

Animals from all groups were starved for 4 h and subsequently administered with fluorescein isothiocyanate (FITC)-dextran (600 mg/kg). After 4 h, rats were sacrificed by cardiac puncture. Serum FD−40 levels were detected by fluorometry [62].

The mesenteric lymph nodes (MLN) and the caudal lymph nodes (CLN) were harvested and investigated for bacteriological analysis [63].

We would like to thank Salma Seetaroo from Ivorienne de Noix de Cajou S.A. of Cote d’Ivoire for providing the cashew kernel samples from West Africa. 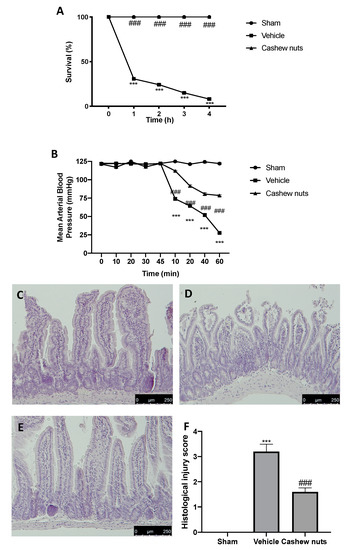 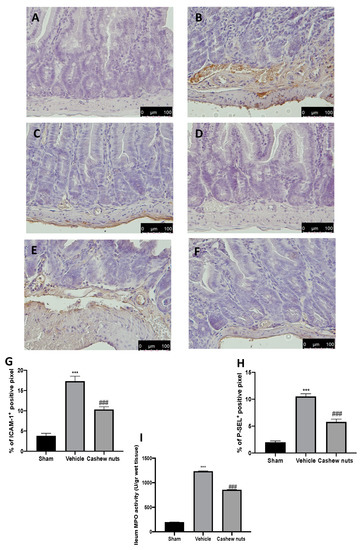 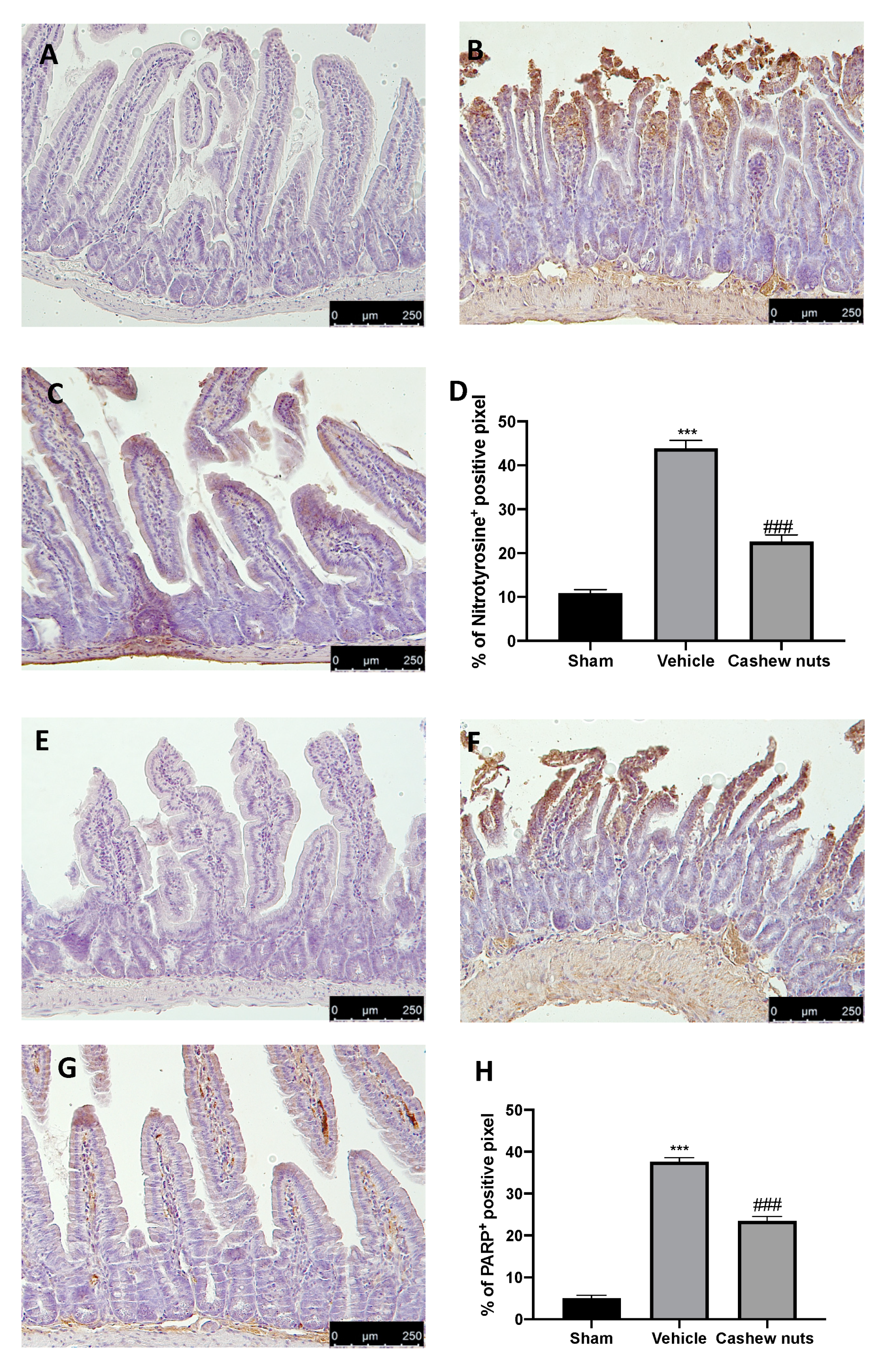 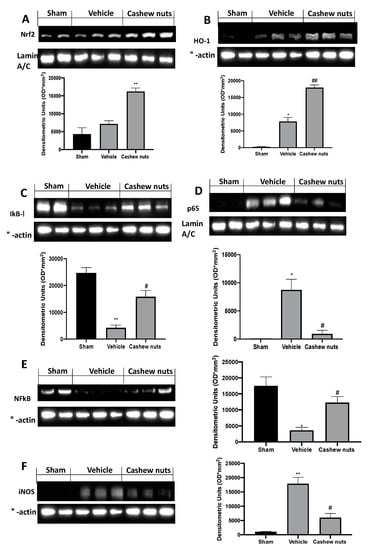 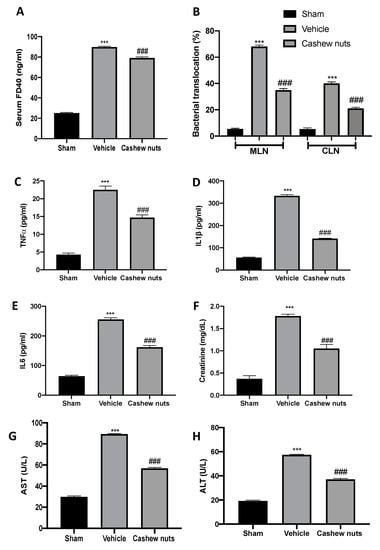 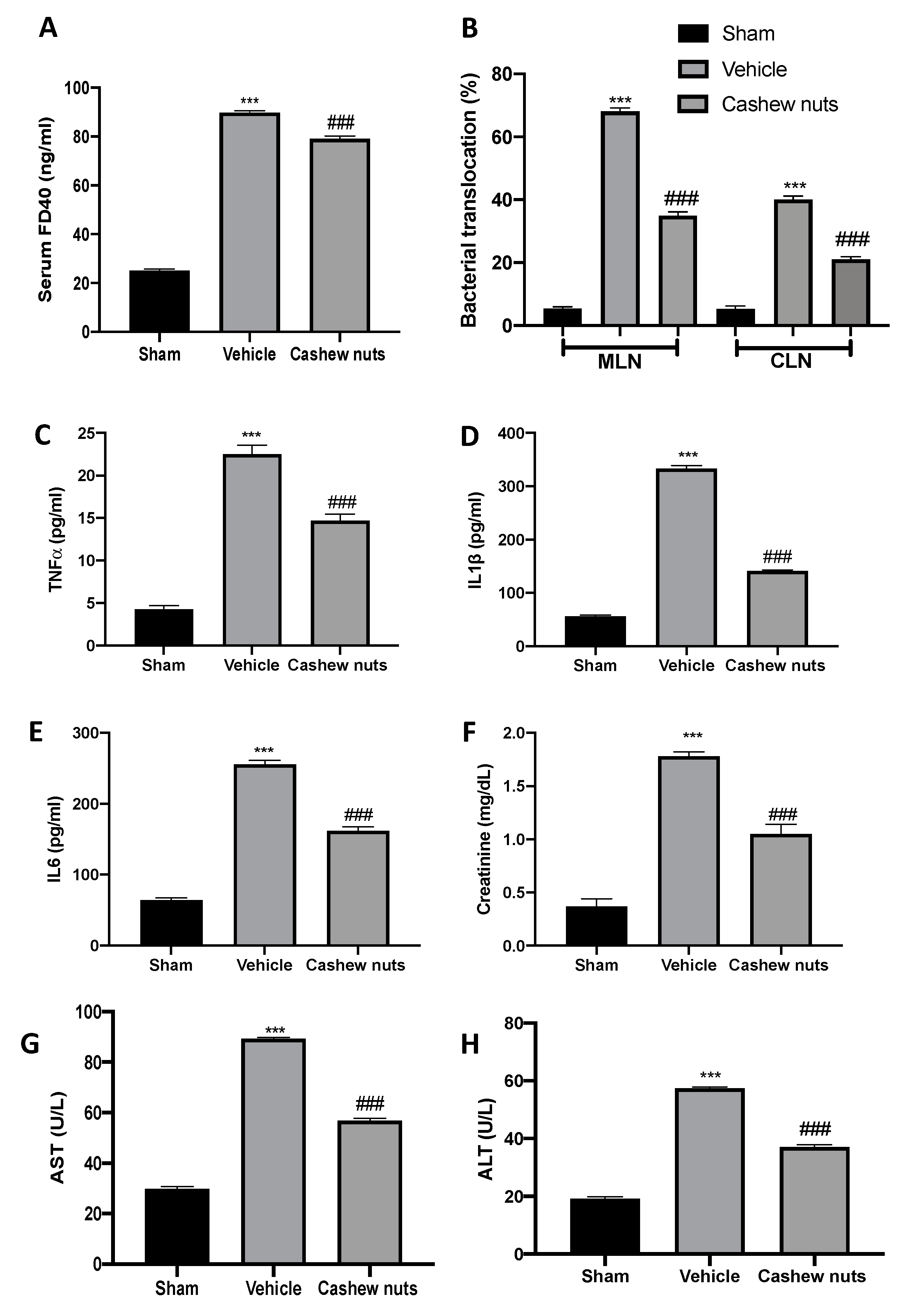