The New Coronavirus (SARS-CoV-2): A Comprehensive Review on Immunity and the Application of Bioinformatics and Molecular Modeling to the Discovery of Potential Anti-SARS-CoV-2 Agents
Previous Article in Journal

:
In this study, we investigated the impact of GD1a-expressing bacterial strains on the infectivity of murine norovirus (MNV). Eligible bacterial strains were screened from a sewage sample using flow cytometry, and their genetic sequences of 16S rRNA were determined. The enzyme-linked immunosorbent assay (ELISA) was employed to analyze the binding between bacteria and MNV particles, and the plaque assay was used to assess the effects of GD1a-positive and negative strains on MNV infectivity. The result from ELISA shows that MNV particles are able to bind to both GD1a-positive and negative bacterial strains, but the binding to the GD1a-positive strain is more significant. The infectivity assay result further shows that the MNV infectious titer declined with an increasing concentration of GD1a-positive bacteria. The addition of anti-GD1a antibody in the infectivity assay led to the recovery of the MNV infectious titer, further confirming that the binding between MNV particles and bacterial GD1a ganglioside compromises MNV infectivity. Our findings highlight the role indigenous bacteria may play in the lifecycle of waterborne enteric viruses as well as the potential of exploiting them for virus transmission intervention and water safety improvement.
Keywords:
GD1a ganglioside; murine norovirus; specific virus–cell interaction; virus environmental fate; enzyme-linked immunosorbent assay; receptor glycan

The expression of GD1a ganglioside in tightly bound extracellular polymeric substances (TB-EPS) of the bacterial strains screened from the sewage sample was examined by Western blotting (Figure 1). Of the four strains tested, strain B4 showed two bands at around 20 and 33 kDa, and therefore was chosen to be the GD1a-positive strain used in the subsequent experiments. The following 16S RNA sequencing revealed that strain B4 belongs to the species Stenotrophomonas maltophilia. By contrast, strain F5, belonging to the species Chryseobacterium massiliae, did not show any sign of obvious banding or smearing and hence was used as the GD1a-negative strain for control.

2.2. The Effect of GD1a-Expressing Bacterial Strains on the MNV Binding Profile

The extent of adsorption between MNV and bacteria was assessed by ELISA with the anti-GD1a antibody (Figure 2). The extent of virus–bacterium binding was measured according to relative adsorption intensity. A relative adsorption intensity of 1.0 means the addition of the MNV suspension does not affect the amount of anti-MNV antibody bound to the plate well surface, and, therefore, the binding between MNV particles and the immobilized bacterial cells cannot be confirmed. By contrast, a value larger than 1.0 means the anti-MNV antibody is more effectively bound to the well surface thanks to the MNV suspension being added, thereby confirming that the MNV particles do bind to the immobilized bacterial cells. The relative adsorption intensity values of all four MNV–bacterium combinations were larger than 1.0, suggesting that both bacterial strains aided the MNV binding capability to some extent, regardless of the GD1a-expressing capability. However, S. maltophilia B4 demonstrates a significantly (p < 0.05) higher relative adsorption intensity (26.7% for MNV S7 and 14.8% for MNV-1) than C. massiliae F5 for both MNV strains.
The results of the plaque assay (Figure 3) are in line with those of the ELISA. Both MNV strains showed significantly (p < 0.05) lower infectious titers in the presence of S. maltophilia B4 in comparison with C. massiliae F5. To be precise, the titer was 58.4% lower in the case of MNV-1 and 58.1% lower for MNV S7. The result indicates that S. maltophilia B4 has an edge over C. massiliae F5 in reducing unbound and free-moving virus particles. Additionally, with either strain, the recorded virus infectious titer was somewhat lower than that of the control group, corroborating the universal binding effect unrelated to GD1a-positivity shown in the ELISA result.

2.3. The Effect on MNV Infectivity

A serial screening approach was performed to identify and separate bacterial strains that are capable of expressing GD1a ganglioside from a sewage sample. The objective was to investigate the existence of indigenous GD1a-positive bacterial strains in a natural aquatic environment that are also culturable in vitro. In short, a selection of experiments, including flow cytometry, chemiluminescent dot blot, Western blotting, 16S RNA sequencing, and ELISA, were conducted step by step for strain selection and validation. Interested readers may refer to the supplementary material section for more details about the screening process.

The bacterial strains selected from the previous screening, one GD1a-positive and one negative, were incubated in R-2A broth for 18–24 h at 37 °C. The culture was then centrifuged (4000× g, 5 min) to concentrate the bacterial cells. After removing the supernatant, the pellet was resuspended with DPBS (05913; Nissui, Tokyo, Japan) and centrifuged again (4000× g, 5 min). The supernatant was removed, and DPBS was added to resuspend the pellet until the OD600 value was 1.0, which was to adjust the concentration of the bacterial suspension. The mixture was heated in a Thermomixer Comfort (Eppendorf AG, Hamburg, Germany) at 65 °C for 40 min for bacterium inactivation to avoid a potential negative effect on the RAW 264.7 cells. The inactivated bacterial suspension was used for the ELISA and plaque assays; all experiments were performed in triplicate
Two MNV strains, MNV-1 and MNV S7, were used in this study. The virus strains were added to confluent RAW 264.7 cells cultured in DMEM. DMEM was prepared using the following procedure: 4.75 g of Dulbecco’s Modified Eagle’s Medium (MEM) (05919; Nissui, Tokyo, Japan) and 1.19 g of HEPES (GB10; Doujindo, Kumamoto, Japan) were dissolved in 430 mL of MilliQ water. After autoclave disinfection, 50 mL of fetal bovine serum (26140079; Gibco, MD, USA), 7.5 mL of 7.5% sodium bicarbonate solution, 10 mL of L-glutamine (25030-081; Gibco, MD, USA), and 10 mL of penicillin–streptomycin (15140-122, Gibco, MD, USA) were added to the medium. After a 7-day cultivation, the RAW 264.7 cells were frozen and thawed three times to release virus particles. The suspension was then filtered with a 0.45 µm membrane (A045H047A; Advantec, Tokyo, Japan), and the filtrate was used as virus stock.

4.4. Plaque Assay in the Presence of Bacterial Components

The inactivated bacterial suspension was mixed 1:1 with MNV stock diluted to a plaque-forming concentration. The mixture was put in a shaker (Multi-Shaker oven HB; Taitec, Saitama, Japan) for 10 min, followed by centrifugation (4000× g, 5 min) to separate bacterial cells from the mixture. The supernatant was filtered with a 0.20 μm membrane (25AS020AS; Advantec, Tokyo, Japan) to remove residual bacterial content, and 1 mL of the permeate was added to each well on a 6-well plate with confluent RAW 264.7 cells prepared in advance. After spending 1 h in the incubator (37 °C, 5% CO2), the liquid was removed from the wells, and 2 mL of agar medium made of a 1:1 mixture of 2×DMEM and agar solution (01101-34; Nacalai Tesque, Kyoto, Japan) was added to each well. The mixture was left for solidification at room temperature, and then, the plate was transferred to the incubator. After a 2-day incubation, 1 mL of 0.03% neutral red solution was added to each well. After another 4 h in the incubator for staining, the neutral red solution was removed and the number of plaques was counted. The control group was a set of parallel experiments in which the inactivated bacterial suspension was added to MNV stock.

To investigate whether the presence of GD1a-positive bacteria led to a change in MNV infectivity, another set of plaque assays was performed with some modifications in the setting of the test groups and sample treatments. In this case, the mixture of inactivated bacterial suspension and MNV stock was not centrifuged. Instead, it was directly added to the RAW 264.7 cell culture. A four-fold serial dilution of inactivated bacterial suspension was introduced to assess the effects of different bacterial concentrations. Finally, to investigate if extracellular substances other than GD1a ganglioside also contributed to the inhibitory effect on MNV infectivity, a set of plaque assays with the addition of anti-GD1a antibody was performed using S. maltophilia B4 and MNV S7. The experimental protocol was largely the same as the one introduced in Section 4.4, but prior to inoculation, the inactivated bacterial suspension was added with anti-GD1a antibody (MAB5606; EMD Millipore, Billerica, MA, USA) at two concentration levels (0.02 and 2.5 μg/mL).

Student’s t-tests were performed with Microsoft Excel for Windows 2016 (Microsoft Corp, Redmond, WA, USA) to determine whether the relative adsorption values and the virus infectious titer values in the different groups were significantly different. A p value of 0.05 or lower was considered significant.

The following is available online: experimental protocols for identifying and isolating GD1a-positive bacterial strains from the sewage sample.

This research was funded by the Japanese Society for the Promotion of Science (JSPS), grant number 17H01299; the Japan Science and Technology Agency (JST), through the Strategic International Collaborative Research Program (SICORP) (grant number JPMJSC18H6); and the National Key Research and Development Program of China (grant number 2017YFE0127300). 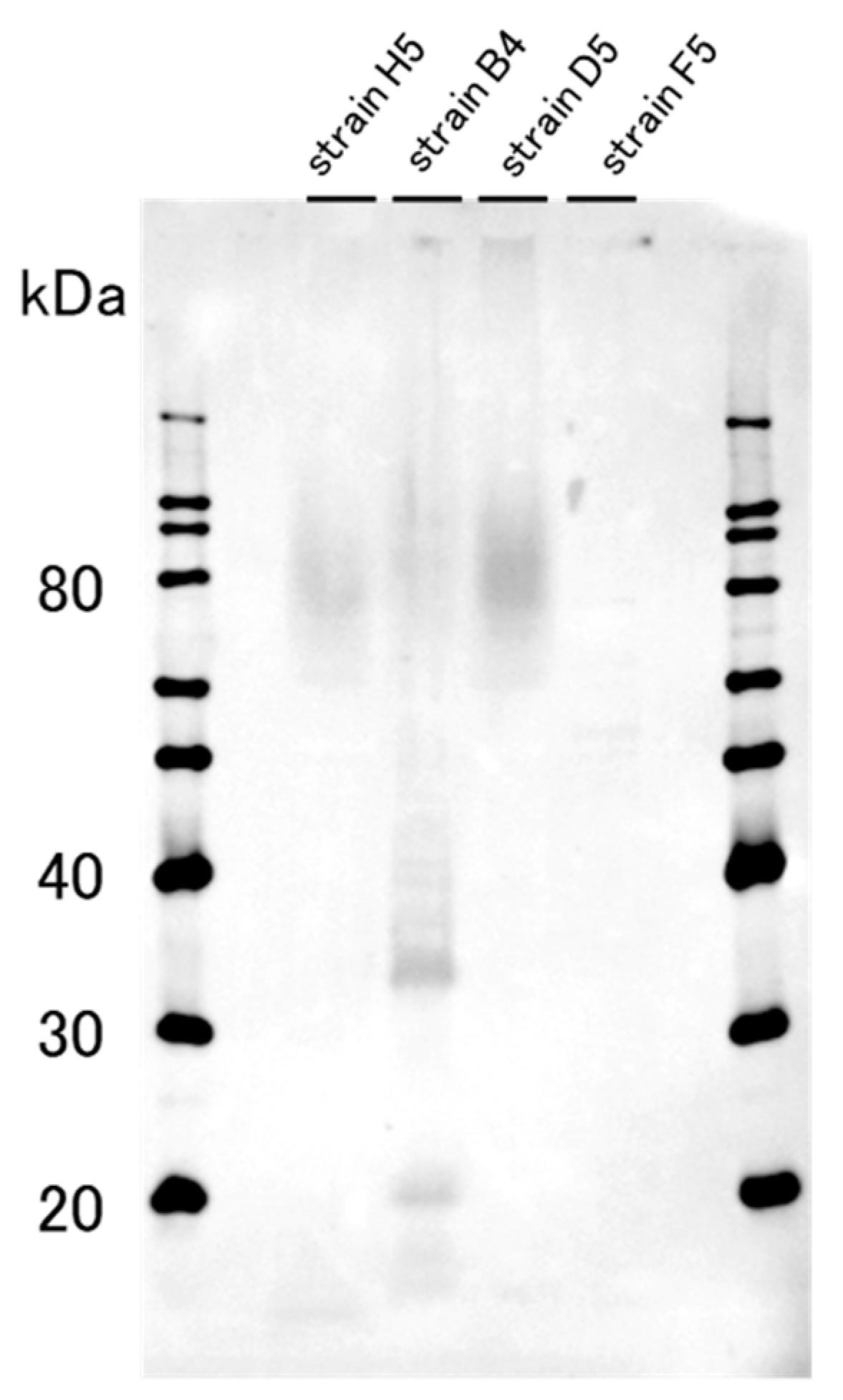 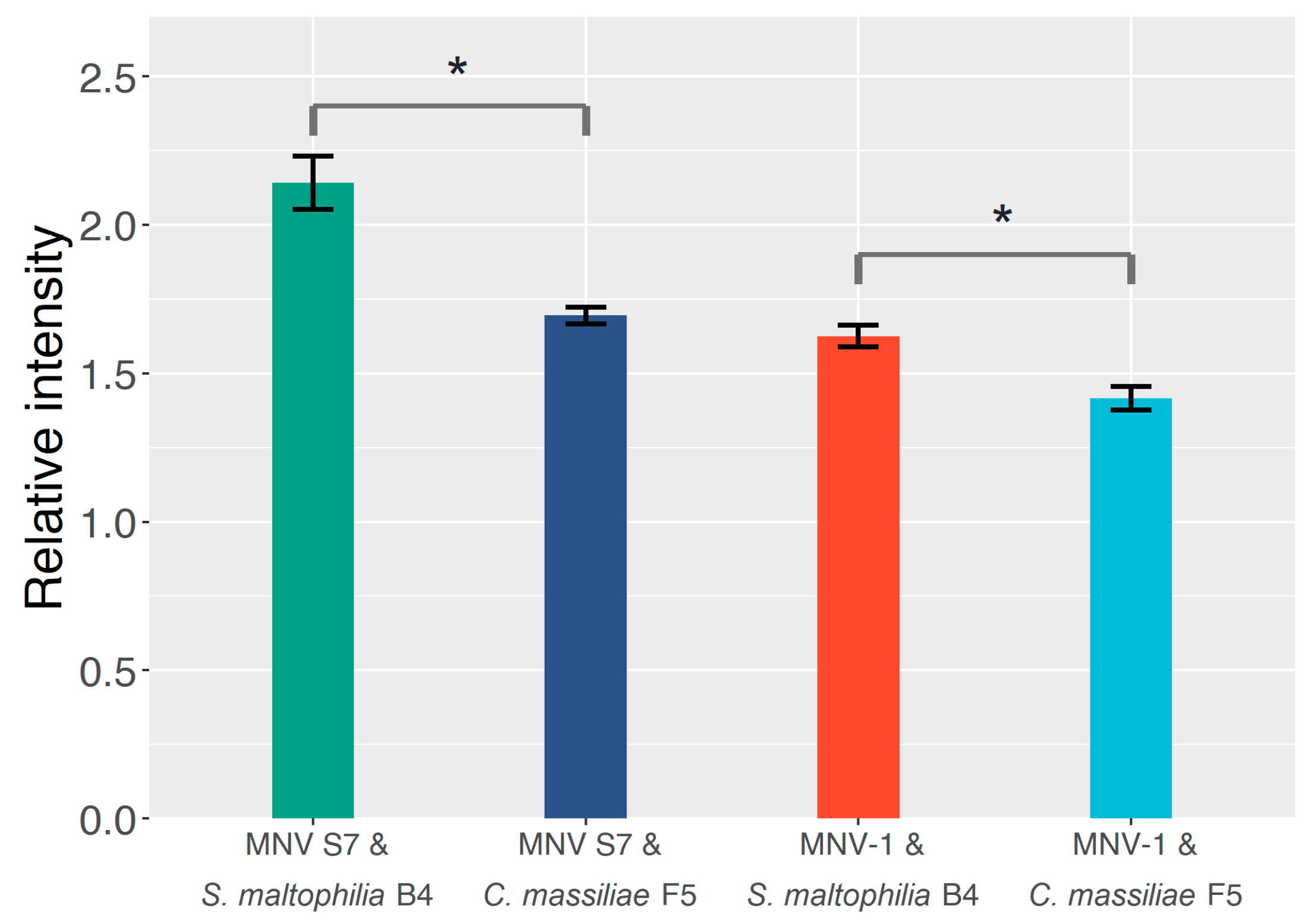 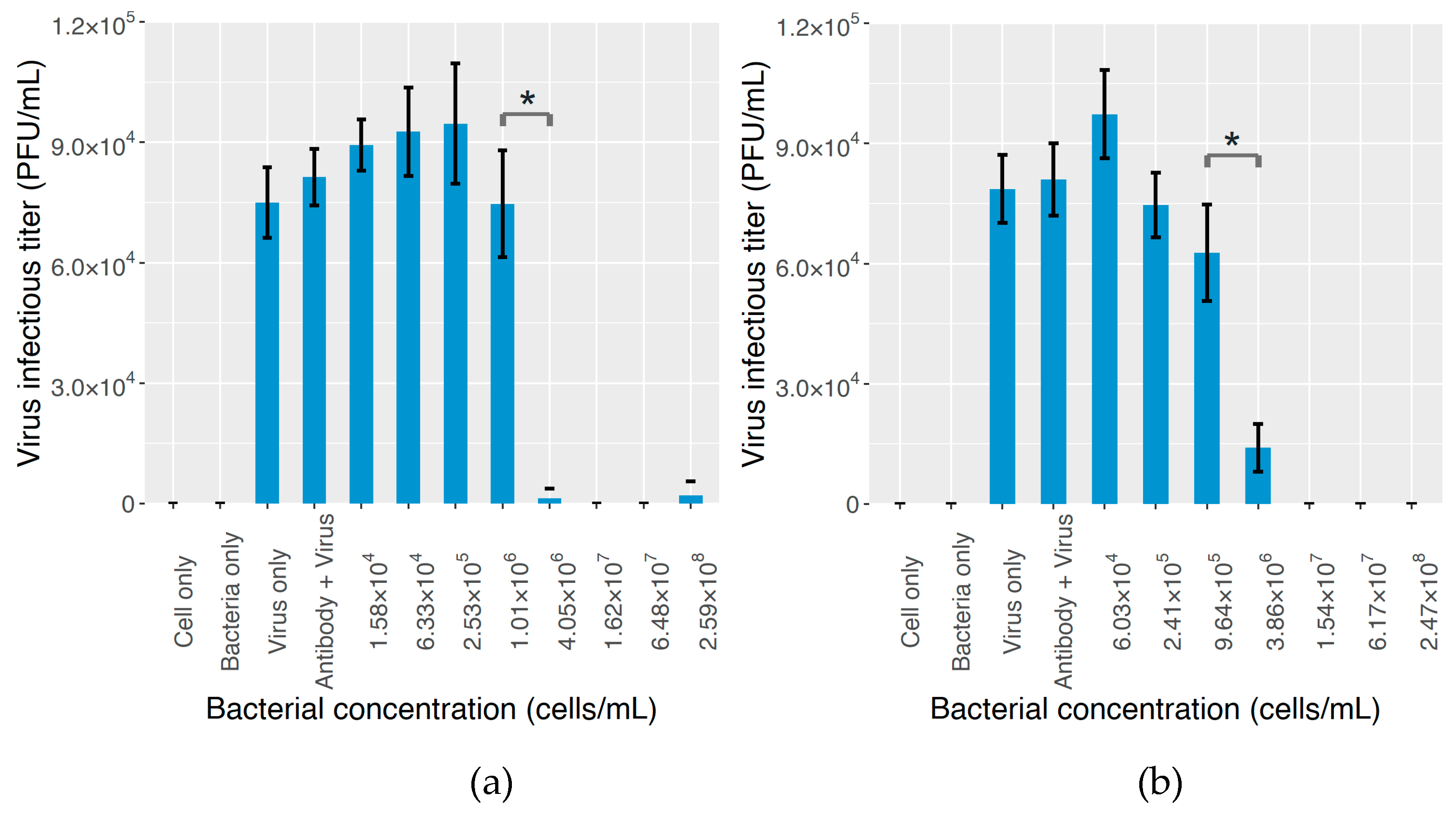