The recovery of La(III) and Ni(II) ions by a macroporous cation exchanger in sodium form (Lewatit Monoplus SP112) has been studied in batch experiments under varying HNO3 concentrations (0.2–2.0 mol/dm3), La(III) and Ni(II) concentrations (25–200 mg/dm3), phase contact time (1–360 min), temperature (293–333 K), and resin mass (0.1–0.5 g). The experimental data revealed that the sorption process was dependent on all parameters used. The maximum sorption capacities were found at CHNO3 = 0.2 mol/dm3, m = 0.1 g, and T = 333 K. The kinetic data indicate that the sorption followed the pseudo-second order and film diffusion models. The sorption equilibrium time was reached at approximately 30 and 60 min for La(III) and Ni(II) ions, respectively. The equilibrium isotherm data were best fitted with the Langmuir model. The maximum monolayer capacities of Lewatit Monoplus SP112 were equal to 95.34 and 60.81 mg/g for La(III) and Ni(II) ions, respectively. The thermodynamic parameters showed that the sorption process was endothermic and spontaneous. Moreover, dynamic experiments were performed using the columns set. The resin regeneration was made using HCl and HNO3 solutions, and the desorption results exhibited effective regeneration. The ATR/FT-IR and XPS spectroscopy results indicated that the La(III) and Ni(II) ions were coordinated with the sulfonate groups. View Full-Text
Keywords: Lewatit Monoplus SP112; lanthanum; nickel; sorption; desorption Lewatit Monoplus SP112; lanthanum; nickel; sorption; desorption
►▼ Show Figures 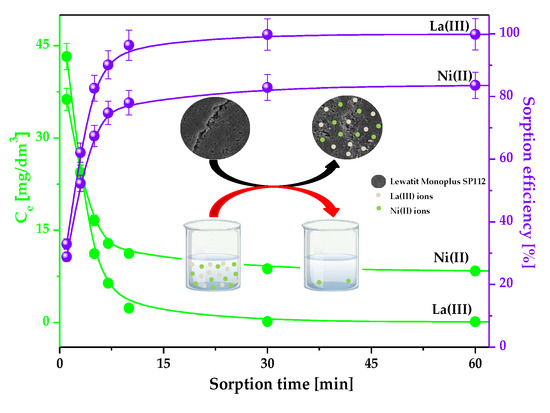