VAE-Sim: A Novel Molecular Similarity Measure Based on a Variational Autoencoder

Molecular similarity is an elusive but core “unsupervised” cheminformatics concept, yet different “fingerprint” encodings of molecular structures return very different similarity values, even when using the same similarity metric. Each encoding may be of value when applied to other problems with objective or target functions, implying that a priori none are “better” than the others, nor than encoding-free metrics such as maximum common substructure (MCSS). We here introduce a novel approach to molecular similarity, in the form of a variational autoencoder (VAE). This learns the joint distribution p(z|x) where z is a latent vector and x are the (same) input/output data. It takes the form of a “bowtie”-shaped artificial neural network. In the middle is a “bottleneck layer” or latent vector in which inputs are transformed into, and represented as, a vector of numbers (encoding), with a reverse process (decoding) seeking to return the SMILES string that was the input. We train a VAE on over six million druglike molecules and natural products (including over one million in the final holdout set). The VAE vector distances provide a rapid and novel metric for molecular similarity that is both easily and rapidly calculated. We describe the method and its application to a typical similarity problem in cheminformatics. View Full-Text
Keywords: cheminformatics; molecular similarity; deep learning; variational autoencoder; SMILES cheminformatics; molecular similarity; deep learning; variational autoencoder; SMILES
►▼ Show Figures 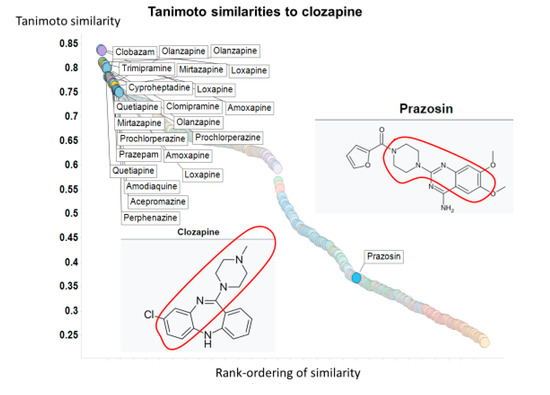