A Review of the Ephedra genus: Distribution, Ecology, Ethnobotany, Phytochemistry and Pharmacological Properties
Next Article in Special Issue

In this study, ingots of a Cu75Ni20Fe5 (composition in at.%) alloy were used as the base material. This sample was subjected to solution treatment at 1323 K for 360 min in vacuum capsules, and then quenched in ice-cold water. Thereafter, the samples contained in capsules were subjected to an aging treatment: they were heated at 873 K for 1000 min in an electric furnace. Details of the sample preparation can be found in [20,21] and the articles cited therein. The sample for measurement was cut into a cube with side lengths of 2 mm and a mass of 76.1 mg.
Figure 1 shows the microstructure of the sample processed from the Cu75Ni20Fe5 alloy, as observed by bright-field transmission electron microscopy (TEM). Cubic nanostructures were precipitated in the sample. The nanometer-sized small particles, which were randomly distributed within the base material, appeared during the early stage of the aging treatment. They grew into spherical precipitates with sizes 10 nm, and finally, single cubic crystalline granules that were oriented along the <100> crystallographic axis of the matrix [20] were obtained. Each side of the precipitated nanocubes was found to be approximately 30 nm in length. The nanocubes were aggregated and formed rectangular blocks that were aligned in the <100> direction of the matrix. Figure 1, which shows the electron diffraction pattern of the selected area of the sample, indicates that both the matrix and the nanocubes crystallized with FCC structures, and that their crystal orientations were identical [21]. The electron back-scattering diffraction inverse pole figure map obtained revealed that the sample was single crystalline, and its crystal direction covered an area of approximately 2 mm × 2 mm [20]. Figure 2 shows the schematics of the structure and the crystal orientations of the sample. The atomic compositions of the matrix and the precipitated nanocubes determined by energy-dispersive X-ray spectroscopic analysis, using a scanning transmission electron microscope, are shown in Table 1. The ratio of the copper-rich matrix to the nanocubes was calculated to be 87.5:12.5 by thermodynamic analysis. By calculating the electron energy band using first principles with the Korringa–Kohn–Rostoker coherent potential approximation (KKR-CPA) method, the density of states and magnetic moments per atom μB were derived. The calculated μB values are listed in Table 1. From these analyses, we concluded that the precipitated nanocubes of Cu21.2Ni51.4Fe27.4 (hereafter denoted as NiFe-Cu nanocubes) are ferromagnetic, while the Cu-rich matrix is substantially nonmagnetic [22]. We also confirmed the nonmagnetic nature of the as-quenched CuNi alloy from its magnetization curve obtained at 5 K with a magnetic field up to 2390 kA/m, using a SQUID magnetometer [23]. According to the phase diagram and Curie temperature variation of CuNiFe alloys reported in earlier publications [24], Cu21.2Ni51.4Fe27.4 and Cu80.9Ni16.6Fe2.5 alloys are stable in the crystal structure of FCC, and their Curie temperatures are approximately 700 K and considerably lower than room temperature, respectively. These previously reported characteristics are in accordance with the experimentally determined characteristics. Therefore, the magnetism of the sample studied in this work stemmed from the NiFe-Cu nanocubes. Here, we report the magnetization characteristics of the NiFe-Cu nanocubes and their magnetocrystalline anisotropy. 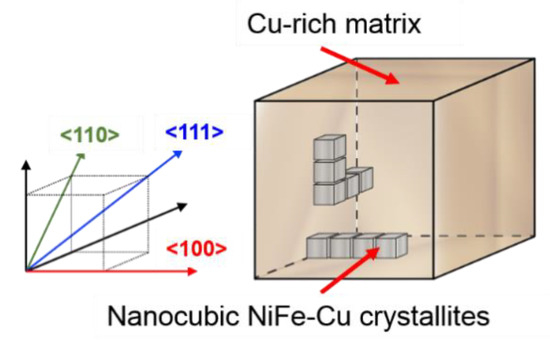