Breast cancer is the most frequent malignancy in females worldwide and is a molecularly heterogeneous disease [1]. Molecular features associated with tumor heterogeneity play a key role in determining treatment plans for breast cancer [2]. Among the breast cancer subtypes, hormone receptor-positive tumors respond to endocrine therapy, while endocrine therapy is not beneficial for triple negative tumors, as they do not express hormone receptors, making it difficult to treat with currently available breast cancer treatments [2]. Breast cancer patients with metastatic disease are mainly treated with chemo- and radiotherapies to enhance the overall survival. Adverse side effects and development resistance after therapy initiation have been identified as major disadvantages of chemo- and radiotherapies. Therefore, it is of great significance to investigate new anti-breast cancer agents, which can effectively target chemo-and radioresistant breast tumor cells without exerting adverse side effects.
Lipid/membrane rafts are highly dynamic, low-density, cholesterol-rich, sphingolipid-rich domains of the plasma membrane that can serve as platforms for a number of signaling proteins responsible for various molecular and cellular events [3,4]. By compartmentalizing different signaling pathways, lipid rafts have been reported to regulate cellular signaling routes between cell membrane and intracellular sites [3]. Cholesterol plays a key role in lipid rafts organization and stabilization. Notably, the presence of major components of cancer signaling pathways such as PI3K/Akt, EGF/EGFR, RAS, JNK-MMP2/9, and estrogen makes lipid rafts a promising therapeutic target in anti-cancer therapy [3,4]. Cancer cells have been reported to contain higher levels of cholesterol and lipid rafts than their normal counterparts [3,4], and cholesterol has been reported to play a prominent role in the development of radio-resistance [5]. Some studies have demonstrated the role that lipid rafts play in radiotherapy resistance. A recent study has shown that the integrity of lipid rafts remains steady, even after radiation exposure [6]. Another recent study illustrates that radiation can enhance the integrity of lipid rafts in lung cancer cells, which might contribute to the development of radiation resistance [7]. Bionda et al. 2007 have shown that the radio-resistance of head and neck squamous carcinoma is associated with some defects in lipid rafts clustering [8]. Some investigations report that several natural products and synthetic chemicals can modulate the structure and function of lipid rafts [3].
Natural products have been used for a number of clinical applications since ancient times [9]. Ginger is one of the most commonly used condiments in the world. It has a long history of ethnomedicinal use dating back 3000 years [10]. Ginger has been used for the treatment of various ailments, including arthritis, pains, atherosclerosis, depression, common colds, and infections [10]. Among a large variety of phytochemicals, gingerols, paradols, shogaols, and lactones are commonly found in ginger. Additionally, organic extracts of ginger and compounds have been reported to exert numerous pharmacological effects including anti-cancer, anti-oxidant, anti-inflammatory, immunomodulatory, and anti-hyperlipemic properties [10,11].
In the present study, we provide experimental evidence that 10-gingerol, a major phytochemical constituent in ginger, can target lipid raft-associated PI3K/Akt signaling through the modulation of lipid rafts, leading to cell death and apoptosis in radio-resistant triple negative breast cancer cells (MDA-MB-231/IR).

2.1. 10-Gingerol Suppresses the Proliferation, Migration, and Invasion of MDA-MB-231/IR Cells

Abnormal regulation of the PI3K/Akt/mTOR signaling pathway is very common in most of the human cancers, making this pathway as an important pharmacological target in anti-cancer treatments [13]. To assess the effects of 10-gingerol on PI3K/Akt signaling in MDA-MB-231/IR cells, the expression levels of PI3K/Akt/mTOR signaling components, namely p-Akt (Ser473), p-Akt (Thr308), p-mTOR (Ser2448), p-PI3Kp85, and p4E-BP1 were evaluated using Western blot. A dose-dependent decrease in the phosphorylation of p-Akt (Ser473), p-Akt (Thr308), p-PI3Kp85, and p4E-BP1 was observed in MDA-MB-231/IR cells exposed to 10-gingerol for 24 h (Figure 2A). Notably, the decreased phosphorylation of p-mTOR (Ser2448) was only observed at the last two doses of 10-gingerol (Figure 2A).
Evading programmed cell death (apoptosis) is a key feature of cancer cells [14]. Therefore, apoptosis promoting agents in cancer cells are considered as key candidates in anti-cancer treatments. A number of natural compounds including ginger-derived compounds have been reported to induce apoptosis in a range of human cancer cells [10]. To explore whether the cytotoxicity of 10-gingerol is mediated through the induction of apoptosis in MDA-MB-231/IR cells, Hoechst staining was first carried out. Following treatment with 10-gingerol, chromatin condensation was visible in MDA-MB-231/IR cells (Figure 2B). In addition, the expression of Bax and Bcl-2, cleaved caspase-7, cleaved PARP, caspase 3, and cleaved caspase 3 following 10-gingerol exposure was analyzed by Western blot experiments. As shown in Figure 2B, 10-gingerol activated the expression of some markers of apoptosis including Bax/Bcl-2, cleaved caspase-7, cleaved PARP, and cleaved caspase-3 compared with untreated cells. Collectively, these results indicate that 10-gingerol can induce apoptosis in MDA-MB-231/IR cells through inhibition of the PI3K/Akt/mTOR signaling pathway.
Similar to this observation, several studies have demonstrated the ability of ginger compounds (gingerols, paradols, and shogaols) to induce apoptosis in a variety of cancer cells in vitro and in vivo [10,11]. In a recent investigation, 10-gingerol has been reported to target MDA-MB-231 cell metastasis [15]. A study by Zhang et al. 2017 demonstrated that 10-gingerol can induce apoptosis by targeting PI3K/Akt signaling in HeLa cells [16]. Another investigation demonstrates that 10-gingerol can suppress the growth of ovarian cancer cells by inducing cell cycle arrest [17]. 6-gingerol, a structurally similar compound to 10-gingerol, has been reported to sensitize gastric cancer cells to cisplatin through the inhibition of PI3K/Akt signaling [18].

Upon activation, phosphatidylinositol (3,4,5)-trisphosphate (PIP3) recruits Akt to the plasma membrane [13]. The integrity of lipid rafts and raft-associated cholesterol has been reported to be responsible for the activation of Akt in lipid rafts [32]. By employing Western blot experiments, we investigated whether 10-gingerol could alter the expression of activated Akt in lipid rafts. As shown in Figure 4A, 10-gingerol was found to dephosphorylate pAkt (Ser473) and pAkt (Thr308) in lipid rafts dose-dependently. The co-treatment of 10-gingerol and cholesterol almost restored the phosphorylation status of pAkt (Ser473) and pAkt (Thr308) in lipid rafts (Figure 4A), suggesting a possible mechanism by which 10-gingerol reduces the integrity of lipid rafts through the depletion of raft cholesterol. However, detailed studies are necessary to elucidate how 10-gingerol depletes raft-resident cholesterol in MDA-MB-231/IR cells.
Akt promotes the cell cycle through the phosphorylation of GSK3β at Ser9, and this phosphorylation inactivates GSK3β kinase [33]. Inactive GSK3β has been reported to stabilize the expression of β-catenin and up-regulate cyclin D1, thereby promoting breast cancer tumorigenesis [34]. We next investigated whether 10-gingerol can alter the expression of Akt downstream targets in MDA-MB-231/IR cells. As shown in Figure 4B, 10-gingerol down-regulated Akt downstream targets GSK3β and cyclin D1 in a dose-dependent manner. β-catenin down-regulation was only observed at the last two doses of 10-gingerol (Figure 4B). Studies have also demonstrated the effects of ginger constituents on the expression of Akt downstream targets in lung and cervical cancer cells [35,36].

The MTT assay was used as the cell proliferation assay in the present investigation. MDA-MB-231, MDA-MB-231/IR, and MCF-10A cells were cultured in 96-well plates (5000 cells/well) and incubated for 24 h. Following incubation, cells were exposed to 10-gingerol (200, 100, 50, 25, 12.5, and 6.25 µM) for 24 and 48 h. MTT assay was conducted as described in our recent publication [12]. The percentage of cell viabilities of treated and untreated groups were calculated using the formula (control − treated) ÷ control) × 100%. GraphPad Prism 5 software was used to calculate IC50 values. Briefly, following 24 h exposure with 10-gingerol, cells were washed with PBS (phosphate-buffered saline) and MTT solution (0.5 mg/mL) dissolved in PBS was added to each well and incubated for 4 h at 37 °C. Following incubation, 100 µL of dimethyl sulfoxide (DMSO) was added each well. A microplate reader was used to measure the absorbance at 570 nm.

The MDA-MB-231/IR cells (1 × 105) were seeded in 6-well plates and allowed to reach 95% confluence. Upon 95% confluency, the cell monolayer was scratched with a sterile pipette tip. Then, cells were washed with PBS and exposed to 10-gingerol (90 and 45 µM) for 24 h. Following incubation, the gap area was quantified and compared with controls (0 h). Docetaxel (3 µM) was used as the positive control in this experiment.

Trans-well cell invasion assay (Corning, Cambridge, MA, USA) was conducted as previously described by us [12]. After coating the upper chamber with 1% matrigel, MDA-MB-231/IR cells (1 × 105 cells/trans well) were transferred to the upper chamber (supplemented with or free of, 10-gingerol). The lower chamber received DMEM containing 10% FBS. After 24 h post-incubation, cells were fixed and stained with 2% crystal violet. Cells were photographed under a phase-contrast microscope. After calculating invaded cell densities in control and treated groups using the image J software, cell densities in treated groups were normalized to control groups to obtain fold changes.

3.11. Prediction of Lipophilicity of 10-gingerol

The lipophilicity of 10-gingerol was predicted with the help of the SwissADME tool, which is a free online tool available for absorption, distribution, metabolism, excretion, and toxicity (ADME) predictions [38].

ImageJ software (US National Institutes of Health, Bethesda, MD, USA) was utilized for densitometry measurements of blots. Statistical analysis was performed using the GraphPad Prism 5 (GraphPad Software, Inc., La Jolla, CA, USA). Data in the present study are presented as the mean ± standard deviation of three separate experiments. For group comparisons, one way analysis of variance (ANOVA) with Dunnett test and student t-test were used at p < 0.05, p < 0.01, or p < 0.001. 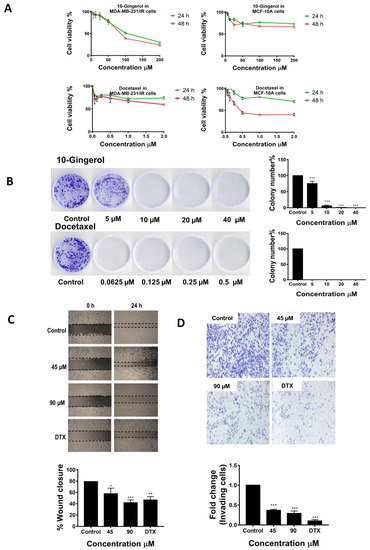 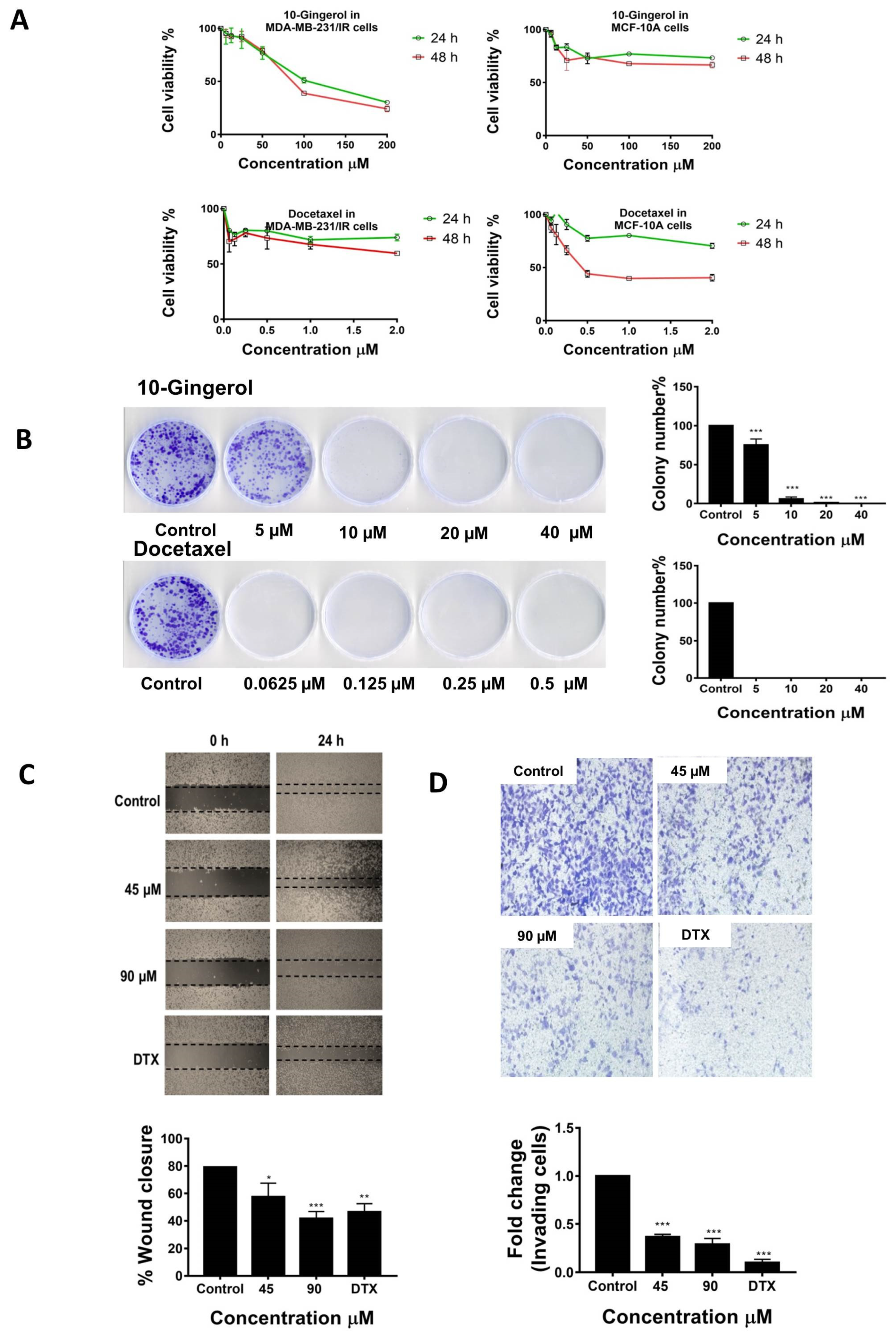 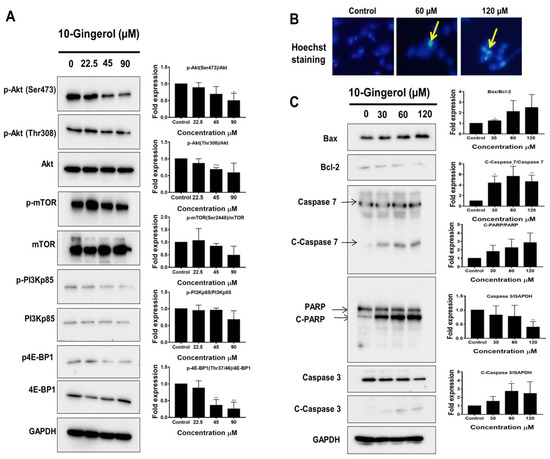 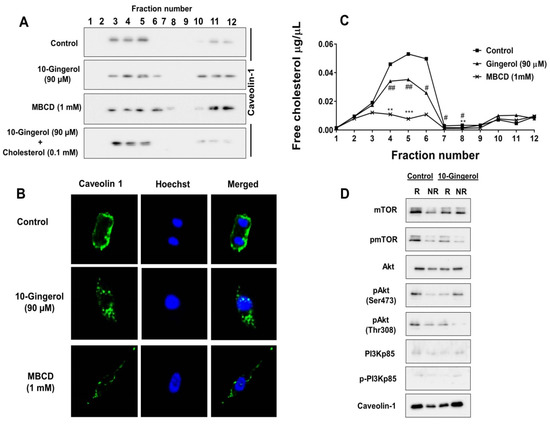 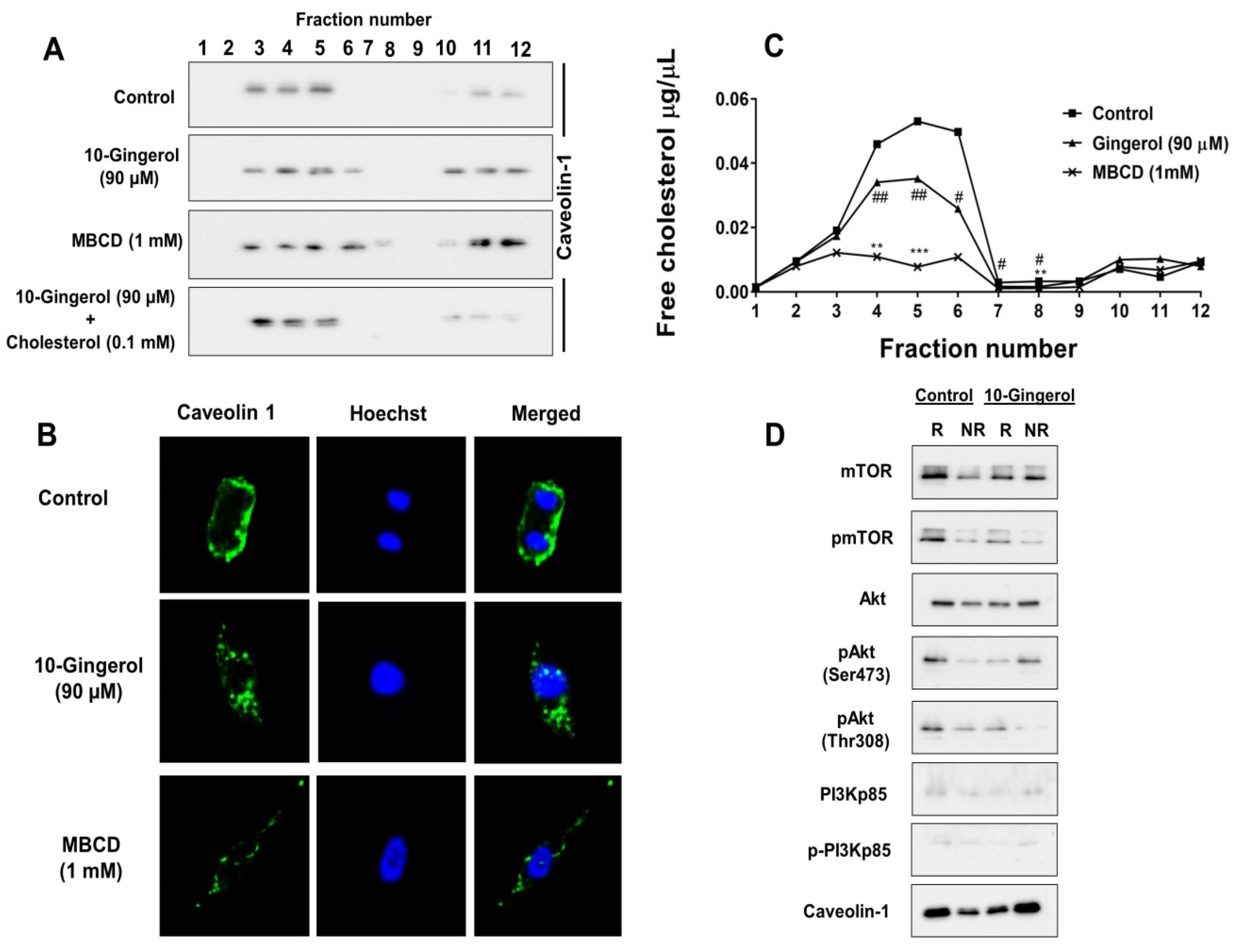 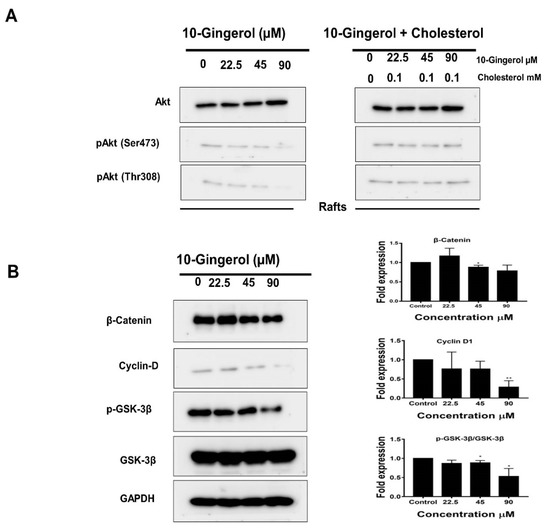 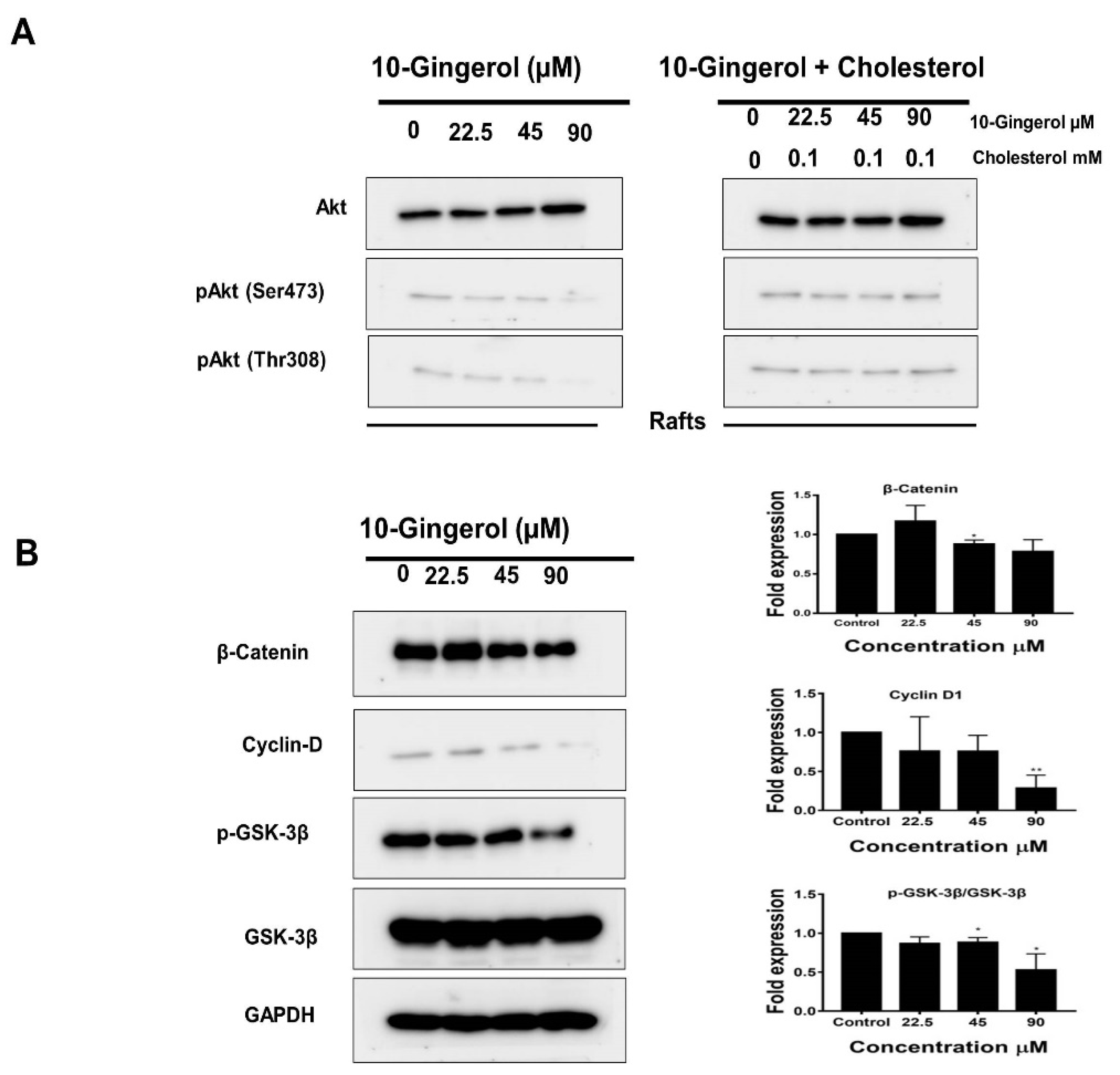