Potential Therapeutic Targets of Epigallocatechin Gallate (EGCG), the Most Abundant Catechin in Green Tea, and Its Role in the Therapy of Various Types of Cancer
Previous Article in Special Issue

A series of octahedral platinum(IV) complexes functionalized with both N-heterocyclic carbene (NHC) ligands were synthesized according to a straightforward procedure and characterized. The coordination sphere around the metal was varied, investigating the influence of the substituted NHC and the amine ligand in trans position to the NHC. The influence of those structural variations on the chemical shift of the platinum center were evaluated by 195Pt NMR. This spectroscopy provided more insights on the impact of the structural changes on the electronic density at the platinum center. Investigation of the in vitro cytotoxicities of representative complexes were carried on three cancer cell lines and showed IC50 values down to the low micromolar range that compare favorably with the benchmark cisplatin or their platinum(II) counterparts bearing NHC ligands. View Full-Text
Keywords: N-heterocyclic carbene; platinum; metal complexes; 195Pt NMR N-heterocyclic carbene; platinum; metal complexes; 195Pt NMR
►▼ Show Figures 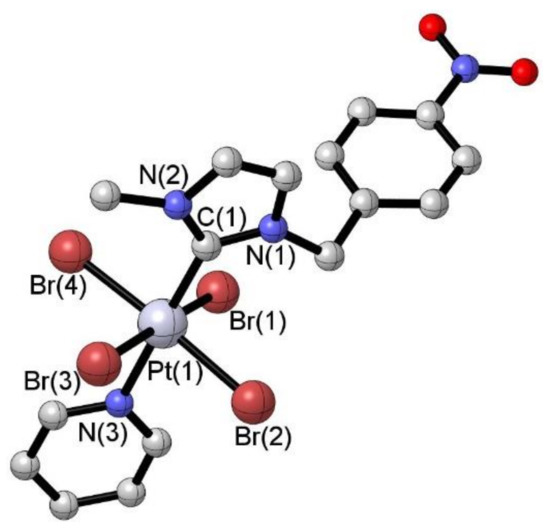