Curcumin (CUR) has a wide range of pharmacological properties, including anti-inflammatory and antioxidant activities, and it can be considered a good candidate for the potential treatment of central nervous system (CNS) pathologies, although its use in clinical practice is compromised due to its high lipophilicity. Solid lipid nanoparticles (SLNs) are well-known nanocarriers representing a consolidated approach for the delivery of lipophilic compounds, but their systemic use is limited due their short half-life. The formulation of stealth SLNs (pSLNs) could be a valid strategy to overcome this limit. Curcumin-loaded-pSLNs were prepared by the solvent evaporation method. Formulation was characterized for their mean size, zeta potential, size distribution, and morphology. Drug antioxidant activity was evaluated by Oxygen Radical Absorbance Capacity (ORAC) assay. Finally, the obtained formulations were analyzed in terms of long-term stability. Curcumin-loaded-pSLNs showed good technological parameters with a mean particle size below 200 nm, as confirmed by TEM images, and a zeta potential value around −30 mV, predicting good long-term stability. Differential Scanning Calorimetry (DSC) analysis confirmed that PEG micelles interacted with the SLN surface; this suggests the location of the PEG on the pSLN surface. Therefore, these preliminary studies suggest that the produced formulation could be regarded as a promising carrier for the systemic administration. View Full-Text
Keywords: curcumin; PEGylation; stealth system; SLN; Turbiscan; TEM; ORAC; cryoprotector curcumin; PEGylation; stealth system; SLN; Turbiscan; TEM; ORAC; cryoprotector
►▼ Show Figures 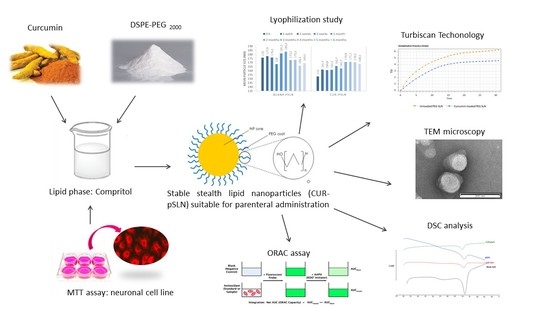