In Silico and In Vivo Analysis of IL37 in Multiple Sclerosis Reveals Its Probable Homeostatic Role on the Clinical Activity, Disability, and Treatment with Fingolimod

We evaluated the in silico expression and circulating levels of interleukin (IL)37 in patients with different forms of multiple sclerosis (MS) and also upon treatment with different disease-modifying drugs. The combined interpretation of the resulting data strengthens and extends the current emerging concept that endogenous IL37 plays an important role in determining onset and progression of MS. The in silico analysis revealed that production of IL37 from cluster of differentiation (CD)4+ T cells from MS patients was reduced in vitro as compared to healthy controls. The analysis of the datasets also demonstrated that “higher” levels of IL37 production from PBMC entailed significant protection from MS relapses. In addition, the in vivo part of the study showed that IL37 was selectively augmented in the sera of MS patients during a relapse and that treatment with the high potency disease-modifying drug fingolimod significantly increased the frequency of patients with circulating blood levels of IL37 (6/9, 66%) as compared to patients receiving no treatment (n = 48) or platform therapy (n = 59) who had levels of IL37 below the limit of the sensitivity of the assay. This finding therefore anticipates that fingolimod may at least partially exert its beneficial effects in MS by upregulating the production of IL37.
Keywords: cytokines; interleukin 37; multiple sclerosis; fingolimod cytokines; interleukin 37; multiple sclerosis; fingolimod

In order to evaluate whether a modulation in IL37 levels could be observed during clinical relapse of MS, we interrogated the GSE19224 dataset. As shown in Figure 2A, a significant reduction in IL37 expression was observed in PBMCs from MS patients undergoing exacerbation of the disease (p = 0.023). No modulation was observed for SIGIRR (Figure 2B), whereas a moderate but significant increase (p = 0.049) in IL18R1 expression was found (Figure 2C). A significant correlation between IL37 and the anti-inflammatory factor, IL1RN, was also observed (Figure 2D).

The expression levels of IL37, SIGIRR, and IL18R1 were evaluated in monozygotic twin pairs discordant for MS. As shown in Figure 3, a trend to reduced levels for the three analyzed genes was observed in CD4+ and CD8+ T cells isolated from the MS-affected individuals; however, no statistical significance was reached, probably because of the very limited number of subjects studied (Figure 3).

2.4. Prediction of Relapses by Transcription Levels of IL37 and Its Receptors

We next evaluated whether the different transcriptional levels of IL37 and its receptors in PBMCs from MS patients could promote or protect MS patients from acute relapses. The patient population was divided into two groups on the basis of the expression level of each of the genes of interest (referred to as high and low expression) and survival curves generated for an observational period of 1500 days. As shown in Figure 4, higher levels of IL37 entailed a significant protection to the exacerbation of the disease (p = 0.0145) (Figure 4). On the other hand, no influence on relapse occurrence was observed for SIGIRR and IL18R1 (Figure 4).

The whole-genome transcriptomic profile of resting and activated CD4+ T cells from MS patients and healthy controls was obtained from the GSE78244 dataset [60], downloaded from the public databank Gene Expression Omnibus (GEO; https://www.ncbi.nlm.nih.gov/gds). The expression levels of the genes of interest were evaluated in unstimulated cells and upon 24 h incubation with anti-CD3/CD28 antibodies. The microarray dataset included data from 14 RR (relapse remitting)-MS patients and 14 healthy donors. All the patients were women and none of them had received immunomodulatory/immunosuppressive drugs for at least 2 months, except for one who underwent intravenous immunoglobulin 15 days before sampling. No relapse was experienced by any of the patients in the prior 3 months [60]. The Agilent-039494 SurePrint G3 Human GE v2 8 × 60K Microarray platform was used and data preprocessing was performed by the Feature Extraction software version 10.7.3.1 (Agilent Technologies, Santa Clara, California, United States), using default parameters (protocol GE1-107_Sep09) [60]. Gene expression profiles of PBMCs of MS patients in stable and relapsing disease were obtained from the publicly available microarray dataset, GSE19224 [61]. The dataset included 14 patients with RR-MS [61]. The relapse samples were obtained within the first week of clinical exacerbation and before initiation of corticosteroid treatment. The relapse was defined as the occurrence of new symptoms or the worsening of existing symptoms—including hemiparesis, paraparesis, sensory loss in various distributions, unilateral ataxia, and myelopathy—with a duration of at least 48 h, in the absence of other illness. The stable samples were obtained at least 1 month before or 3 months after a clinical relapse. The female/male ratio was 9:5. Six patients were on IFN-β treatment at both sampling times, two patients were on no disease-modifying treatment, four patients were receiving glatiramer acetate at both sampling times, and two patients were untreated at the time of relapse and on glatiramer when the stable samples were obtained [61]. The dataset was generated using Illumina HumanRef-8 v3.0 expression beadchip [61]. To determine the expression levels of the genes of interest in peripheral CD4+ and C8+ T cells from monozygotic twins discordant for MS, we interrogated the GSE16461 dataset, originally published by [62]. The mean age was 37.5 ± 2.9 and the female/male ratio was 3:1. The male twin comprised an SP patient. All of the other patients suffered from RR-MS. All patients were treatment-naïve [62]. The dataset was generated using the Affymetrix Human Genome U133 Plus 2.0 Array. Linear Model for Microarray (LIMMA) analysis was used for the evaluation of statistical significance.
In order to evaluate the relationship between expression levels of the genes of interest and the time to relapse, we interrogated the GSE15245 dataset, which included the transcriptional profile of PMBCs from 51 drug-naïve clinically definite MS patients [63]. Patients had a mean age of 38.5 ± 1.4, and a mean EDSS score of 2.4 ± 0.2 [63]. The dataset was generated using the Affymetrix Human Genome U133A 2.0 Array and data were preprocessed using the robust multi-chip average (RMA) background correction algorithm. The sample population was sorted on the basis of the expression levels of IL37, SIGIRR, and IL18R1. Log-rank test was applied to evaluate differences in the percentage of patients developing acute relapses in a 1500 day time-frame (Table 4).

A total of 129 consecutive MS patients (40 male and 89 female) from the Department for Central Nervous System (CNS) Immune-Mediated Disorders, Clinic of Neurology, Clinical Center of Serbia, Belgrade, were enrolled in the study. The diagnosis was established according to the revised McDonald criteria 2017 [64]. Mean age at examination was 41.1 ± 10.1 years (mean ± SD) with disease duration of 11.1 ± 7.5 years. The demographic and clinical characteristics of MS patients are presented in Table 5.
The study comprised patients with various MS phenotypes established according to the criteria of Lublin (2004) [65]. The majority of patients (85%) suffered from RR-MS in clinical remission.
The level of neurological disability was assessed by the Expanded Disability Status Scale (EDSS) [66]. In addition, we also evaluated the Multiple Sclerosis Severity Score (MSSS) in each patient in order to rate disease severity using disability as measured by EDSS and disease duration [67]. MSSS corrects EDSS for duration by using an arithmetically simple method to compare an individual’s disability with the distribution of scores in cases having equivalent disease duration. A reference table for comparisons was created by applying the previously mentioned method to a database of 9892 European MS patients. The MSSS is a useful method for identifying factors that influence disease progression using single assessment data.
RR-MS patients were treated with approved DMTs. The first group was treated with moderate efficacy DMTs (“platform therapy”) that included IFN-β-1b, IFN-β-1a subcutaneous (sc) 3 times per week, IFN-β-1a intramuscular (im), glatiramer acetate, and teriflunomide. The second group was treated with high efficacy DMTs and included fingolimod, natalizumab, ocrelizumab, alemtuzumab, and mitoxantrone. No corticosteroid treatment was used for these patients during the 6 months before their inclusion in the study.
Out of these 96 patients presenting with stable RR-MS at initial blood sampling, 26 suffered from an acute exacerbation during the period of completion of recruitment into the study. Relapse was defined as the occurrence of a new neurological disturbance with a duration of at least 24 h [68]. These patients had been treated 3–10 days after the onset of the new neurological disturbances with short intravenous (i.v.) course of high-dose steroids for 2 h in the early morning (methylprednisolone, 1 g/day for 5 days). Serum samples were obtained from all patients just before the initiation of the treatment (pre-treatment) and at the day after the end of the treatment (day 6). The informed consent was obtained from each patient prior to inclusion in the study. The study was approved by the Ethical Committee of the Clinical Centre of Serbia, Belgrade (N° 890/6, dated 21.12.2018).

IL37 concentration in sera from MS patients was quantified with an ELISA kit (Cusabio, Houston, TX, USA). The detection range of the kit was 31.25–2000 pg/mL. All assay procedures were carried out according to the manufacturer’s instructions. The absorbance values of standards and samples were obtained at 450 nm (reference wavelength 540 nm) using a VICTOR Nivo Multimode Microplate Reader. For evaluation of statistical analysis, the samples with levels of IL37 below the limit of sensitivity of the assays were assigned this limit as a theoretical value.

For the analysis of the correlation between serum IL37 levels and clinical parameters in MS patients, the non-parametric Spearman test was used. To determine the significance of the different proportions of patients with dosable IL37, a chi square test with Yates’ correction was used. A two-tailed Wilcoxon matched-pairs signed rank test was used for the evaluation of differences in IL37 before and after corticosteroid treatment. Two-tailed p-values less than 0.05 were considered significant. Data were analyzed using the Statistical Package for the Social Sciences (SPSS) software (Advanced Statistics, version 17.0, Chicago, IL, USA) and GraphPad Prism software (San Diego, CA, USA). 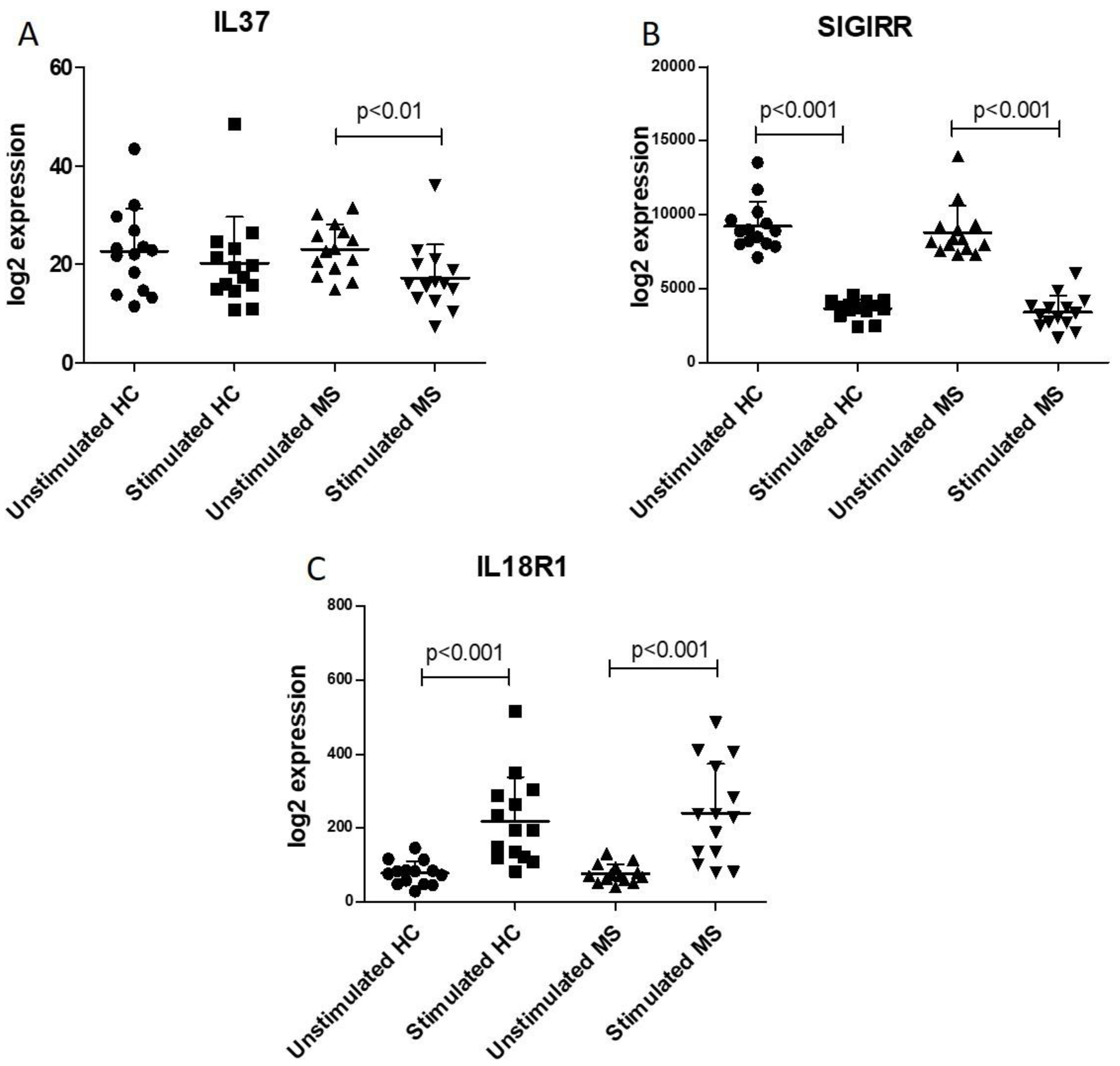 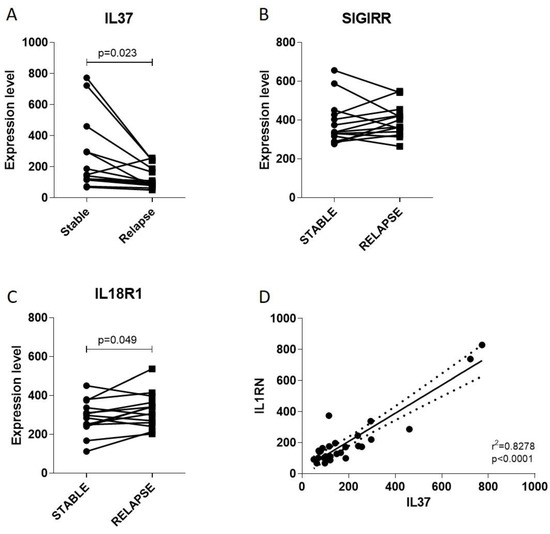 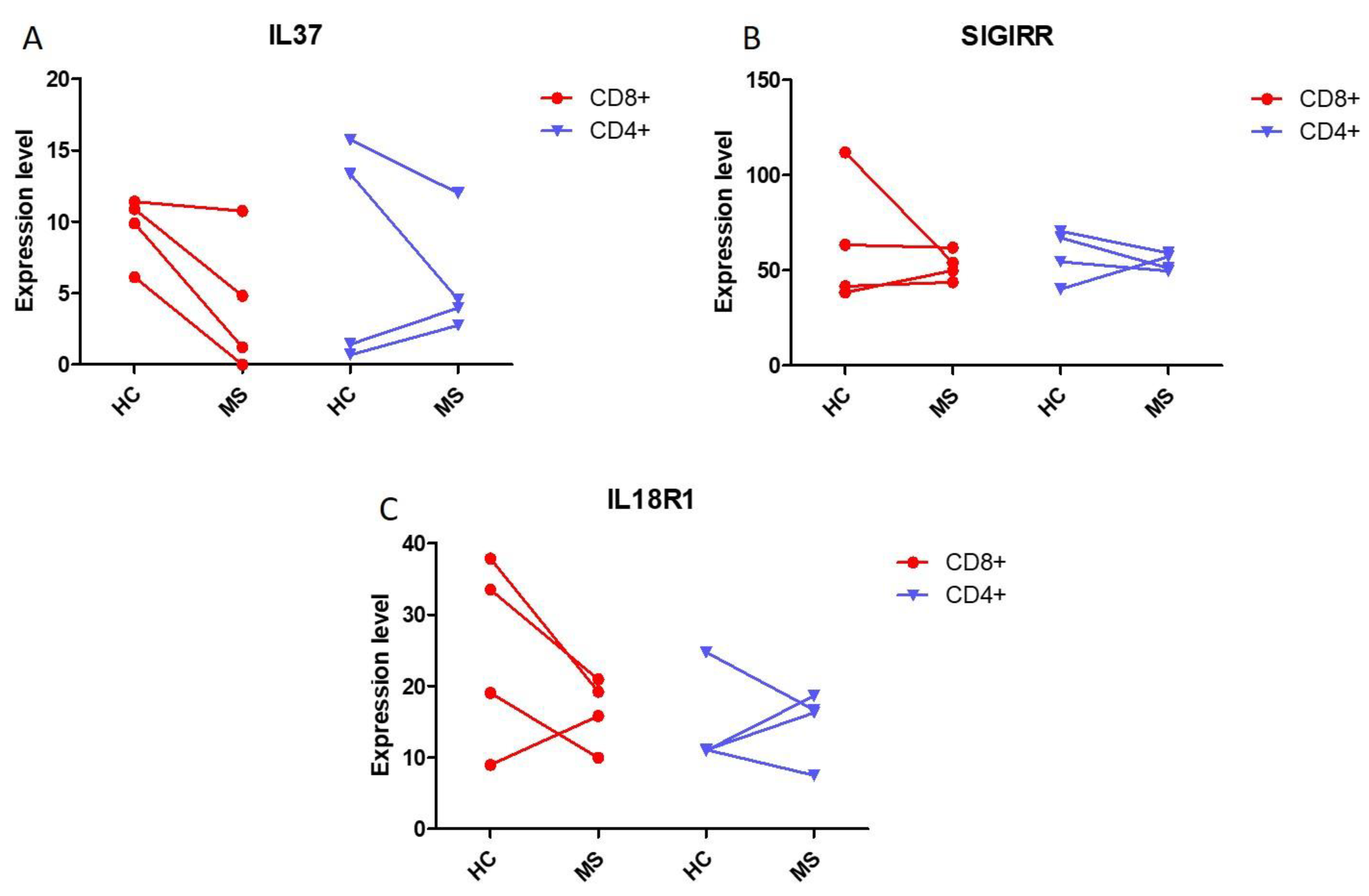 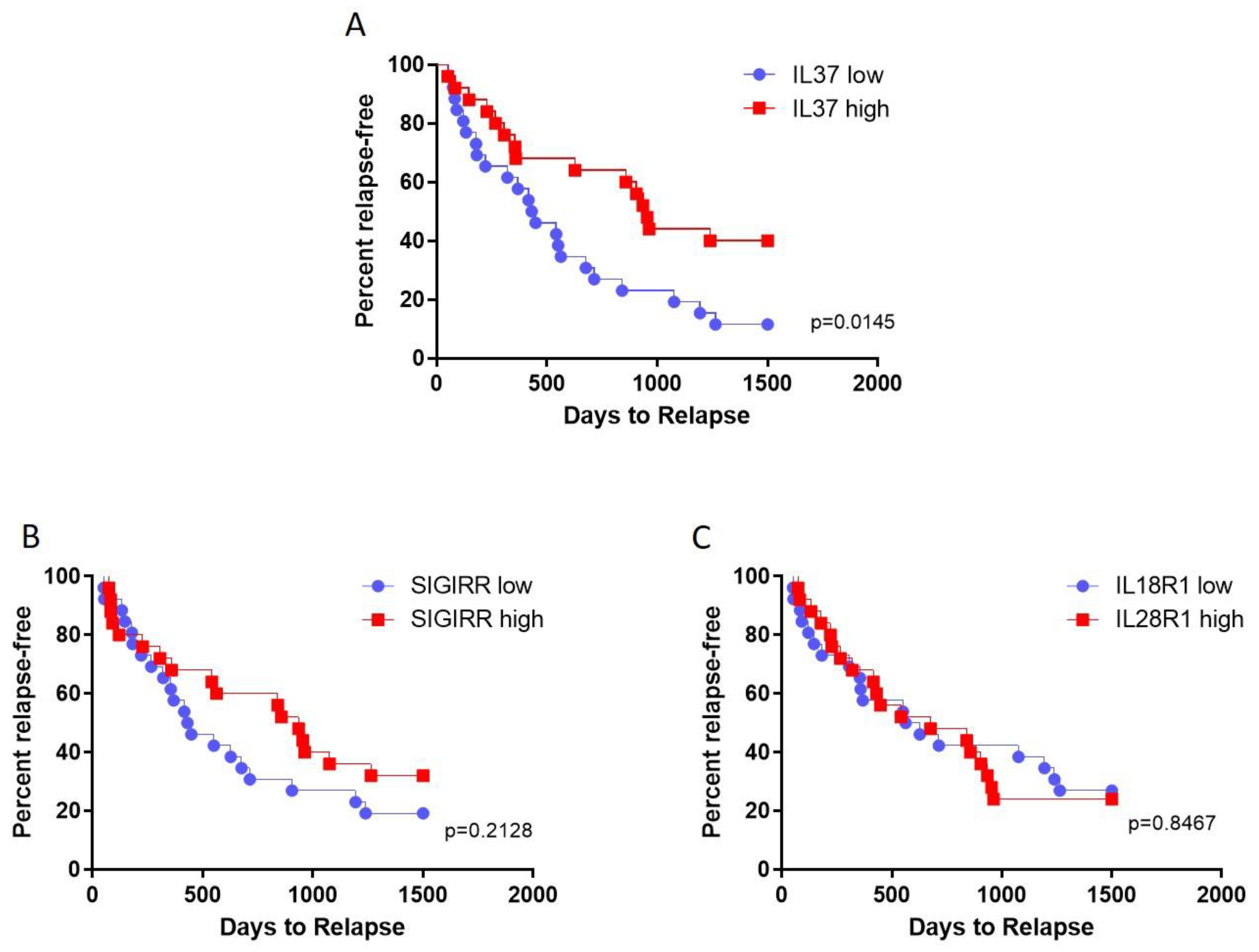 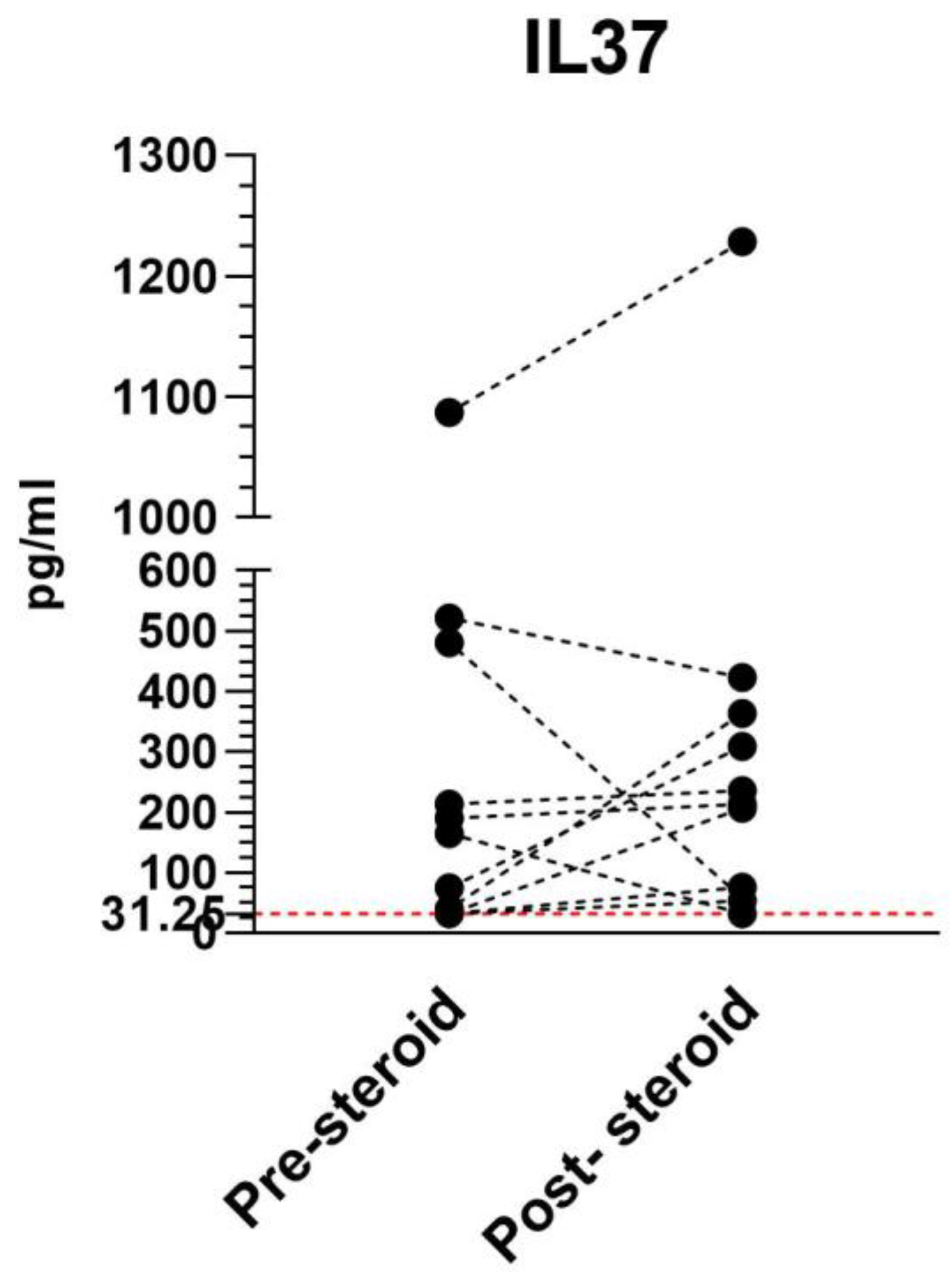 Table 5. Characteristics of multiple sclerosis patients.
Table 5. Characteristics of multiple sclerosis patients.
* Number (%).
© 2019 by the authors. Licensee MDPI, Basel, Switzerland. This article is an open access article distributed under the terms and conditions of the Creative Commons Attribution (CC BY) license (http://creativecommons.org/licenses/by/4.0/).
We use cookies on our website to ensure you get the best experience. Read more about our cookies here.
Accept
We have just recently launched a new version of our website. Help us to further improve by taking part in this short 5 minute survey here. here.
Never show this again