Half-Wave Potentials and In Vitro Cytotoxic Evaluation of 3-Acylated 2,5-Bis(phenylamino)-1,4-benzoquinones on Cancer Cells
Next Article in Special Issue

This work incorporates a variety of conjugated donor-acceptor (DA) co-monomers such as 2,6-diaminopurine (DP) into the structure of a polymeric carbon nitride (PCN) backbone using a unique nanostructure co-polymerization strategy and examines its photocatalytic activity performance in the field of photocatalytic CO2 reduction to CO and H2 under visible light irradiation. The as-synthesized samples were successfully analyzed using different characterization methods to explain their electronic and optical properties, crystal phase, microstructure, and their morphology that influenced the performance due to the interactions between the PCN and the DPco-monomer. Based on the density functional theory (DFT) calculation result, pure PCN and CNU-DP15.0 trimers (interpreted as incorporation of the co-monomer at two different positions) were extensively evaluated and exhibited remarkable structural optimization without the inclusion of any symmetry constraints (the non-modified sample derived from urea, named as CNU), and their optical and electronic properties were also manipulated to control occupation of their respective highest occupied molecular orbital (HOMO) and lowest unoccupied molecular orbital (LUMO). Also, co-polymerization of the donor–acceptor 2,6-diamino-purine co-monomer with PCN influenced the chemical affinities, polarities, and acid–base functions of the PCN, remarkably enhancing the photocatalytic activity for the production of CO and H2 from CO2 by 15.02-fold compared than that of the parental CNU, while also improving the selectivity. View Full-Text
Keywords: polymeric carbon nitride; donor-acceptor; photocatalysis; CO2 reduction; DFT calculation polymeric carbon nitride; donor-acceptor; photocatalysis; CO2 reduction; DFT calculation
►▼ Show Figures 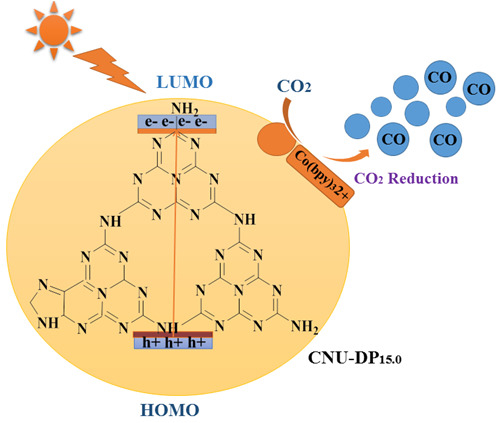