Oxidative stress is proposed as a regulatory element in ageing and various neurological disorders. The excess of oxidants causes a reduction of antioxidants, which in turn produce an oxidation–reduction imbalance in organisms. Paucity of the antioxidant system generates oxidative-stress, characterized by elevated levels of reactive species (oxygen, hydroxyl free radical, and so on). Mitochondria play a key role in ATP supply to cells via oxidative phosphorylation, as well as synthesis of essential biological molecules. Various redox reactions catalyzed by enzymes take place in the oxidative phosphorylation process. An inefficient oxidative phosphorylation may generate reactive oxygen species (ROS), leading to mitochondrial dysfunction. Mitochondrial redox metabolism, phospholipid metabolism, and proteolytic pathways are found to be the major and potential source of free radicals. A lower concentration of ROS is essential for normal cellular signaling, whereas the higher concentration and long-time exposure of ROS cause damage to cellular macromolecules such as DNA, lipids and proteins, ultimately resulting in necrosis and apoptotic cell death. Normal and proper functioning of the central nervous system (CNS) is entirely dependent on the chemical integrity of brain. It is well established that the brain consumes a large amount of oxygen and is highly rich in lipid content, becoming prone to oxidative stress. A high consumption of oxygen leads to excessive production of ROS. Apart from this, the neuronal membranes are found to be rich in polyunsaturated fatty acids, which are highly susceptible to ROS. Various neurodegenerative diseases such as Parkinson’s disease (PD), Alzheimer’s disease (AD), Huntington’s disease (HD), and amyotrophic lateral sclerosis (ALS), among others, can be the result of biochemical alteration (due to oxidative stress) in bimolecular components. There is a need to understand the processes and role of oxidative stress in neurodegenerative diseases. This review is an effort towards improving our understanding of the pivotal role played by OS in neurodegenerative disorders. View Full-Text
Keywords: oxidative stress (OS); neurodegenerative disease; reactive oxygen species (ROS); mitochondria; Parkinson’s disease (PD); Alzheimer’s disease (AD) oxidative stress (OS); neurodegenerative disease; reactive oxygen species (ROS); mitochondria; Parkinson’s disease (PD); Alzheimer’s disease (AD)
►▼ Show Figures 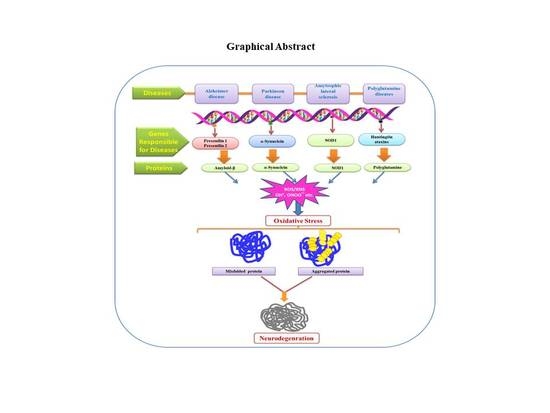