Co-Existence of Hypertensive and Anti-Hypertensive Constituents, Synephrine, and Nobiletin in Citrus unshiu Peel

The current study aimed to provide a comprehensive bibliometric overview of the literature on curcumin, complementing the previous reviews and meta-analyses on its potential health benefits. Bibliometric data for the current analysis were extracted from the Web of Science Core Collection database, using the search string TOPIC=(“curcumin*”), and analyzed by the VOSviewer software. The search yielded 18,036 manuscripts. The ratio of original articles to reviews was 10.4:1. More than half of the papers have been published since 2014. The major contributing countries were the United States, China, India, Japan, and South Korea. These publications were mainly published in journals representing the following scientific disciplines: biochemistry, chemistry, oncology, and pharmacology. There was a significant positive correlation between the total publication count and averaged citations per manuscript for affiliations, but not for countries/regions and journals. Chemicals that were frequently mentioned in the keywords of evaluated curcumin publications included curcuminoids, resveratrol, chitosan, flavonoids, quercetin, and polyphenols. The literature mainly focused on curcumin’s effects against cancer, inflammation, and oxidative stress. Cancer types most frequently investigated were breast, colon, colorectal, pancreatic, and prostate cancers.
Keywords: curcumin; pharmacology; bibliometrics; biochemistry; cancer; citation analysis; VOSviewer; Web of Science curcumin; pharmacology; bibliometrics; biochemistry; cancer; citation analysis; VOSviewer; Web of Science

Turmeric (Curcuma longa L., Zingiberaceae) is traditionally used in Indian medicine for the treatment of various illnesses, mainly connected with inflammatory processes. According to the Plant List database (http://www.theplantlist.org), the Curcuma genus includes more than 93 species, with different use and content of active substances. Turmeric is cultivated mainly in India, China, Indonesia, Jamaica, and Peru. The medicinal applications of turmeric have been known for thousands of years, especially by Ayurvedic therapy, which uses turmeric for stomach disorders, as a tonic, for blood cleansing, as well as for prevention or treatment of skin diseases. In addition, an administration of turmeric is recommended in disorders of bile production, anorexia, rhinitis, sinusitis, cough, diabetic lesions, disorders of liver functions, and rheumatism. The contemporary focus on turmeric and its substances can be tracked back to the 1970s, when mechanisms of its anti-inflammatory, antibacterial, and antioxidant properties started to be evaluated. However, readers should note that most of the scientific papers reporting the biological effects of curcumin represent preliminary in vitro data, obtained with biochemical (cell-free) assays or on cell culture models.
The aroma of turmeric is based on a bunch of sesquiterpenes. Typical examples are (S)-ar-turmerone, zingiberene, β-turmerone, and curlone. Their ratio and the presence of a wide range of other volatile compounds (e.g., monoterpenes) in various turmeric cultivars affect the aroma of curcuma when used as a food seasoning [1]. The marker substances isolated from turmeric are called curcuminoids. The main representative of this group of compounds is the bis-α,β-unsaturated diketone curcumin (diferuloylmethane). Its structure had already been described by 1910. Curcumin is a compound showing keto-enol tautomerism, with the predominance of the keto form in acidic environment and stable enol form under basic conditions. Turmeric contains 2–5% of curcumin, according to the origin. After extraction, it is characterized as a yellow crystalline powder, practically insoluble in water, showing good solubility in fats and ethanol [2].
Curcumin is famous for its potential applications in the prevention and treatment of cancer [3], as well as for its anti-inflammatory, antioxidant [4], and antiangiogenic activities [5]. These activities were potentiated by the design and synthesis of structurally related analogues following a “lead optimization” approach. Meanwhile, curcumin may also inhibit β-amyloid formation and hence be potentially useful for preventing and treating Alzheimer’s disease [6,7,8,9,10]. There are several highly cited reviews that summarize the above-mentioned important research findings about the health beneficial effects of curcumin [11,12]. Meanwhile, similar to those in other research fields, such as in nutritional neurosciences [13,14,15,16], there have already been many meta-analyses of the effects of curcumin, including those with focus on downregulation of human tumor necrosis factor (TNF)-alpha levels [17], alleviation of joint arthritis [18], and regulation of blood lipid levels [19]. With so many publications available in the existing literature, a bibliometric analysis could identify and quantitatively analyze the major themes of the curcumin research literature, as well as summarize the citation performance of various contributors and topics. Similar analyses have already been published in other research fields such as ethnopharmacology [20], food sciences [21], neuropharmacology [22], nutraceuticals [23], and oncology [24].
The current study aimed to identify and analyze publications on curcumin to outline the major contributors in terms of author affiliations, countries/regions, and journals. It also aimed to reveal the major research themes present in the literature about curcumin, based on the publication and citation data. These pieces of information should be helpful for readers, including audience without deep previous knowledge of the topic, to quickly have a general overview of the curcumin literature landscape, including prominent authors, major output countries, and prevailing major research topics and trends. The provided information can also be used to identify potentially promising research directions and possible collaboration partners, and to give initial orientation to direct further more in-depth searches for the identification of relevant publications or research opportunities.

In November 2018, we accessed the Clarivate Analytics-owned Web of Science (WoS) Core Collection online database to identify curcumin publications with the following search string: TOPIC=(“curcumin*”). This search string identified publications that mentioned the word “curcumin” or its derivatives in the title, abstract, or keywords. We did not place additional restriction on the search strategy, such as publication year, publication type, or language. To gain insides into research focused on extracts of the plant Curcuma longa/turmeric, an additional analysis was performed to evaluate the publications that mentioned Curcuma longa or turmeric without mentioning curcumin, using the search strategy: TOPIC=(“curcum*” OR “tumeric*” OR “turmeric*” NOT “curcumin*”).

The publications identified from the search were evaluated by: (1) publication year; (2) author affiliations; (3) countries/regions of the affiliations; (4) journal title; (5) WoS category; (6) publication type; (7) language; and (8) total citation count. The full records and cited references of these publications were downloaded and loaded into VOSviewer for further bibliometric analyses.
The VOSviewer software (v.1.6.8, 2018) is capable of extracting and analyzing the semantic contents of the titles, abstracts, and keywords of publications, relating them to the citation count data and generating a bubble map to visualize the results [25]. Default parameters were used for the analyses and creation of bubble maps. The font size of the words in the bubble map indicates their frequency of occurrence (multiple appearances in a single publication count as one). Two words are nearer to each other if they co-occurred in the evaluated publications more frequently. Only words that appeared in at least 1.0% (n = 181) of the manuscripts were analyzed and visualized. For the keyword map, full counting method was used, meaning that each co-occurrence link carried the same weight. The default “association strength method” was used for normalization of the co-occurrence matrix with default values of attraction and repulsion.
We tested the possible correlation between total publication count and averaged citations per manuscript for the affiliations, countries/regions, and journals. For these data, we only considered entities that contributed to at least 0.01% (n = 19) of the publications. Pearson’s correlation test was performed in SPSS 25.0 (IBM, New York, NY, USA). Test results with p < 0.05 were considered statistically significant.

The current study analyzed the curcumin literature with a bibliometric approach. The increased publication shares from Asian countries in recent years were similarly observed for antioxidants-related literature [4]. Meanwhile, the huge contributions of the United States, China, and India were consistent with their dominance in ethnopharmacology research [20]. According to a previous bibliometric study, Curcuma papers oriented to nutraceuticals and functional foods research fields received large contributions from the UK and European states [23]. The unique geographic distribution here, different from bibliometric studies of other scientific disciplines, was the relatively large contribution from authors affiliated to Japanese and Korean institutions, especially on its biochemical and therapeutic properties, such as chemopreventive and anti-amyloidogenic effects [8,38].
Because clinical trials comprised of a small proportion of the curcumin publications analyzed in the current study, the bubble maps did not show many terms indicative of clinical studies. This is unlike the situation in neuroscience, where bubble maps clearly showed two clusters of terms, with one cluster being more related to cellular, molecular, and genetic aspects, and the other one being more related to clinical aspects [39].
By analyzing the studies describing clinical trial studies of curcumin, we found that oral curcumin (C3 complex) was a popular theme. Indeed, the C3 complex used in these studies is a standardized extract of dried rhizomes of C. longa and it represents the most clinically studied form of curcumin, evaluated in clinical trials in the context of cancer [32,33], but also in multiple other conditions, including Alzheimer’s disease [40], psoriasis vulgaris [41], oral lichen planus [42], osteoarthritis [43], inflammation associated with metabolic syndrome [44] and obesity [45], radiation dermatitis [46], as well as for modulation of human gut microbiome [47]. Moreover, while the low bioavailability of ingested curcumin had initially limited its clinical usage, a variety of different formulations with enhanced bioavailability have been recently developed and already studied in multiple clinical trials [48,49,50].
We did not analyze the authorship of the curcumin publications. This was because there existed many Chinese authors who have similar initials that caused inaccurate counting. For instance, according to the data downloaded from WoS, the most prolific author for the evaluated curcumin publications was Li Y., which represented Li Yan, Li Yu, and Li Yiwei upon closer examination. Analyzing authorship by considering authors’ full names was also not viable, because some publication records only listed author initials.
This study had some limitations, such as the use of a single database (WoS) to collect publications and their bibliometric data. Additionally, the analysis is of retrospective nature, and due to the fact that very recent trends (which still did not yield significant number of publications, due to their novelty) might remain undetected. Moreover, the readers should be reminded that articles mentioning Curcuma longa or turmeric/tumeric without mentioning curcumin were included in this work as a separate analysis, presented in Table 6 and Figure 4.

To conclude, a bibliometric analysis was performed to assess publications on curcumin research. Our findings have revealed that the United States and Asian countries, such as China, India, Japan, and South Korea, were major contributors. Most of the publications were focused on biochemistry, chemistry, oncology, and pharmacology. Over half of the publications were published since 2014, which mainly focused on the effects of curcumin against cancer, inflammation, and oxidative stress. Frequently investigated cancer types were breast, colon, colorectal, pancreatic, and prostate cancers. The large number of publications since 2014 could be attributed to the increased productivity of China (publications since 2014 = 2443; 68.9% of total contributions) and India (publications since 2014 = 1620; 51.8% of total contributions). Drug delivery, bioavailability, and nanoparticles have emerged as research themes for curcumin research. We expect that future studies should continue to improve delivery or even find new ways to deliver curcumin to target sites, so that more clinical studies can be supported. 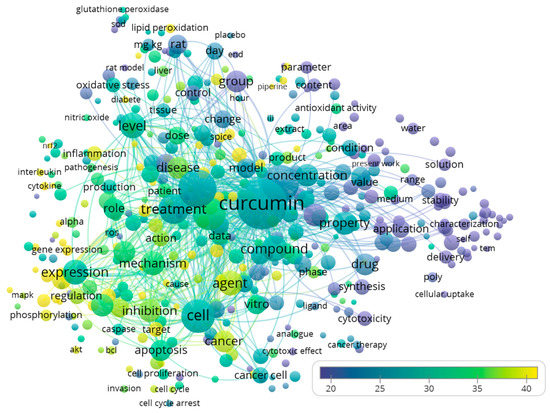 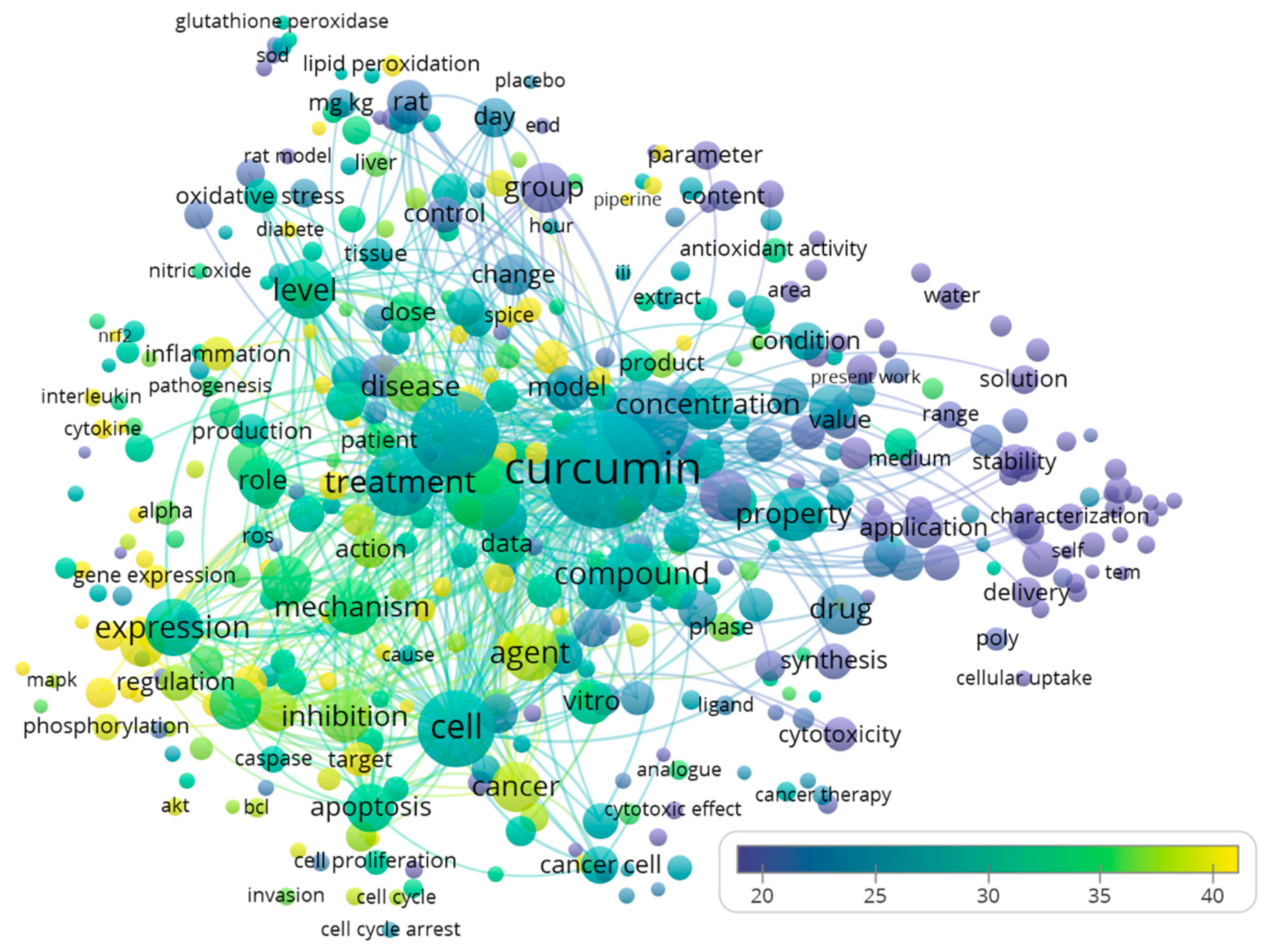 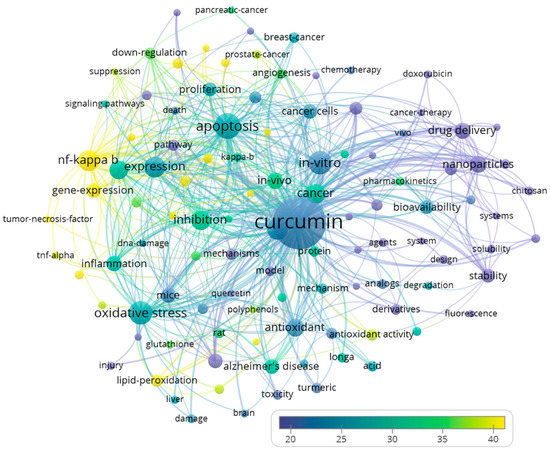 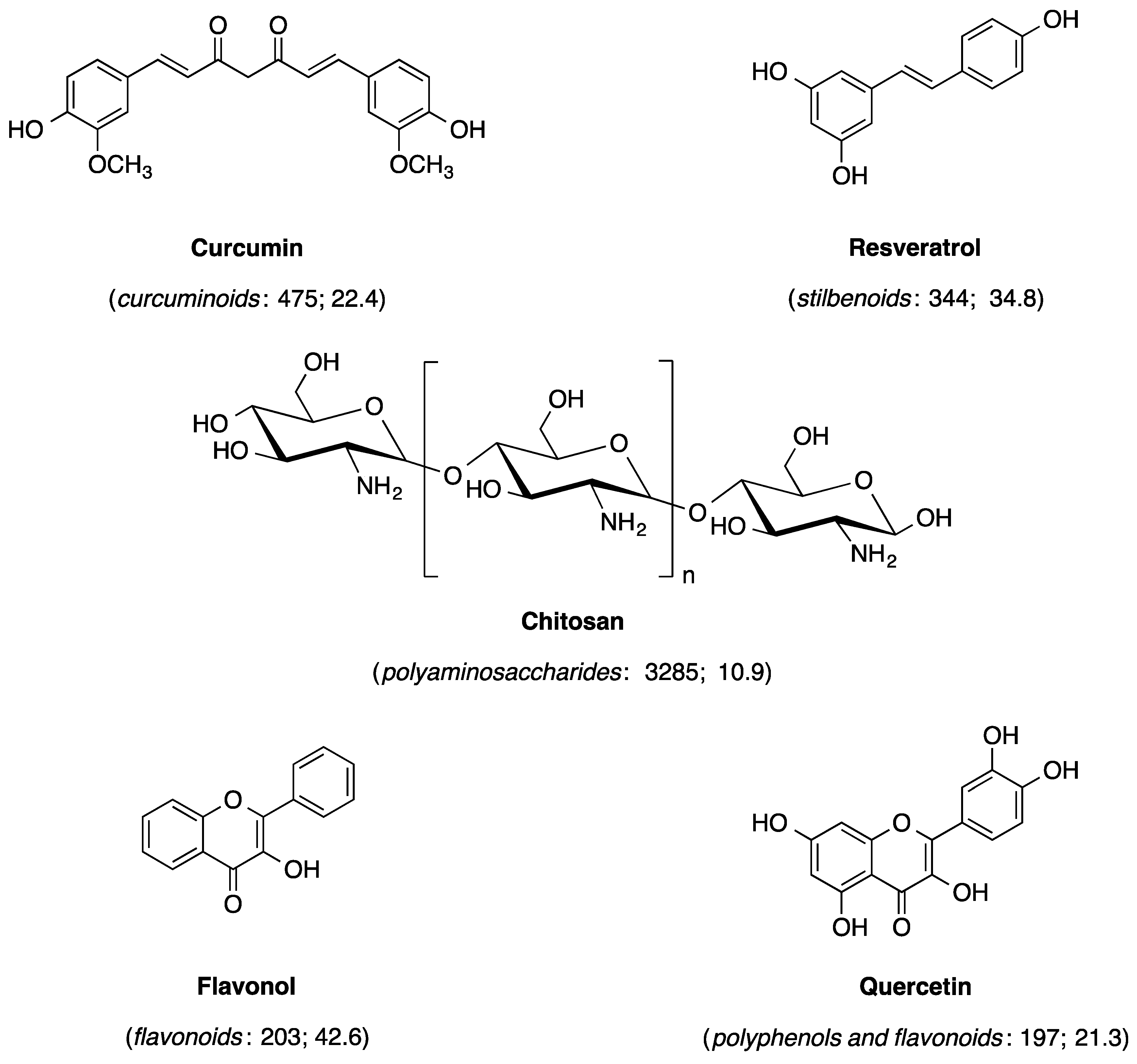 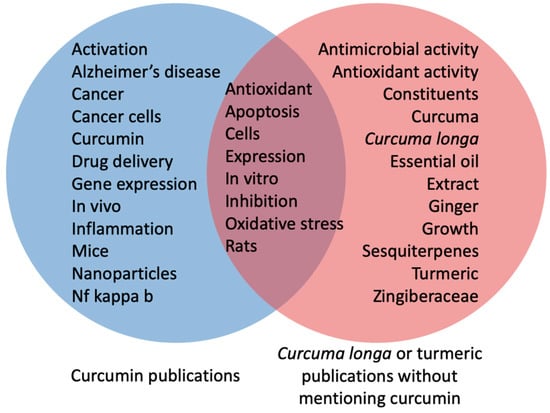