Purification of an Antifungal Peptide from Seeds of Brassica oleracea var. gongylodes and Investigation of Its Antifungal Activity and Mechanism of Action
Previous Article in Special Issue

Guanine-quadruplex (G4) motifs, at both the DNA and RNA levels, have assumed an important place in our understanding of the biology of eukaryotes, bacteria and viruses. However, it is generally little known that their very first description, as well as the foundational work on G4s, was performed on protozoans: unicellular life forms that are often parasitic. In this review, we provide a historical perspective on the discovery of G4s, intertwined with their biological significance across the protozoan kingdom. This is a history in three parts: first, a period of discovery including the first characterisation of a G4 motif at the DNA level in ciliates (environmental protozoa); second, a period less dense in publications concerning protozoa, during which DNA G4s were discovered in both humans and viruses; and third, a period of renewed interest in protozoa, including more mechanistic work in ciliates but also in pathogenic protozoa. This last period has opened an exciting prospect of finding new anti-parasitic drugs to interfere with parasite biology, thus adding new compounds to the therapeutic arsenal. View Full-Text
Keywords: G-quadruplex; G4; protozoa G-quadruplex; G4; protozoa
►▼ Show Figures 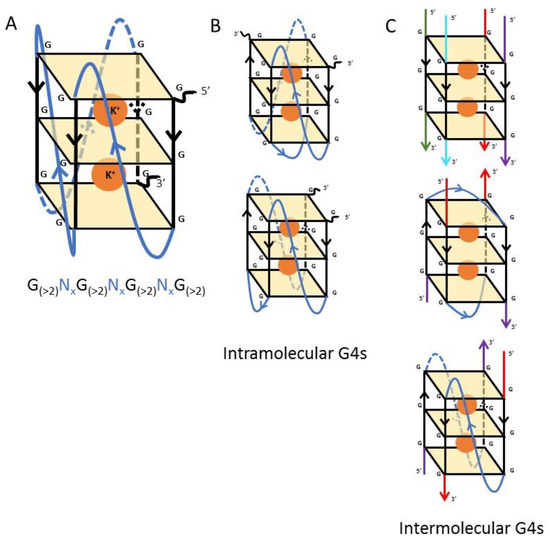