Distinct Difference in Sensitivity of NIR vs. IR Bands of Melamine to Inter-Molecular Interactions with Impact on Analytical Spectroscopy Explained by Anharmonic Quantum Mechanical Study
Previous Article in Journal

In order to enable the calibration model to be effectively transferred among multiple instruments and correct the differences between the spectra measured by different instruments, a new feature transfer model based on partial least squares regression (PLS) subspace (PLSCT) is proposed in this paper. Firstly, the PLS model of the master instrument is built, meanwhile a PLS subspace is constructed by the feature vectors. Then the master spectra and the slave spectra are projected into the PLS subspace, and the features of the spectra are also extracted at the same time. In the subspace, the pseudo predicted feature of the slave spectra is transferred by the ordinary least squares method so that it matches the predicted feature of the master spectra. Finally, a feature transfer relationship model is constructed through the feature transfer of the PLS subspace. This PLS-based subspace transfer provides an efficient method for performing calibration transfer with only a small number of standard samples. The performance of the PLSCT was compared and assessed with slope and bias correction (SBC), piecewise direct standardization (PDS), calibration transfer method based on canonical correlation analysis (CCACT), generalized least squares (GLSW), multiplicative signal correction (MSC) methods in three real datasets, statistically tested by the Wilcoxon signed rank test. The obtained experimental results indicate that PLSCT method based on the PLS subspace is more stable and can acquire more accurate prediction results.
Keywords: calibration transfer; NIR spectroscopy; PLS; quantitative analysis model calibration transfer; NIR spectroscopy; PLS; quantitative analysis model

2.1. The Analysis of the Corn Dataset

2.2. The Analysis of the Wheat Dataset

In Table 1, we can note that when no calibration transfer method was used, the difference between the RMSEP of directly using Calibration and the RMSEP of Recalibration was much smaller than the difference in corn dataset, in part because the difference between the two instruments in wheat dataset was relatively small.
Figure 4 displays the comparison of the measured values and the predicted values from different models. From these plots, it is worth noting that the differences between measured values and predicted values in PLSCT were only slightly larger than Recalibration and smaller than any other methods.
Since the spectra difference between the master instrument and the slave instrument was small in the wheat dataset, the effect of feature transfer was not obvious in the PLS subspace from Figure 5. However, the difference between the first pseudo predicted feature after transfer and the first predicted feature is still slightly smaller. The number of samples of the standard set in Figure 5A was 30.
The performances of the different methods on wheat samples are also shown in Appendix A Table A1. The Table A2 shows clearly that PLSCT has much lower prediction error than PDS, SBC, GLSW and MSC when the number of the samples in the standard set is 10, 25 and 30. When the number of the samples in the standard set was 30, the minimum RMSEP obtained by PLSCT was 0.6604. The RMSEP of Recalibration2 fluctuated greatly, probably because there were outliers in the standard set of the slave instrument. These outliers also affect the performance of the SBC as shown in Figure 4D.
The results by Wilcoxon signed rank test reveal that PLSCT is significantly different from PDS(3), PDS(5), PDS(7), SBC, CCACT, GLSW, MSC and Recalibration2 at 95% confidence level. The RMSEP improvement resulting from PLSCT compared with these models were 51.77389%, 54.35396%, 57.02112%, 87.45319%, 42.18862%, 61.34526%, 56.43832% and 69.98222%, respectively (shown in Appendix A Table A2).

2.3. The Analysis of the Pharmaceutical Tablet Dataset

The first dataset was corn dataset. We can conveniently access to obtain it at http://www.eigenvector.com/data/Corn/. The dataset is composed of 80 corn samples. Three near-infrared spectrometers were used to measure these samples, with wavelength range from 1100 nm to 2498 nm at 2 nm intervals (700 channels). The property of moisture, oil, protein and starch of corn is contained in the dataset. In this paper, the moisture content was chosen as the property of interest. We choose M5 as ‘master instrument’, MP5 as ‘slave instrument’. The difference between the spectra measured on M5 instrument and MP6 instrument can be observed in Figure 8A.

The second dataset was the wheat dataset, which consisted of 248 samples measured by three instruments of manufacturer A. This dataset was the shootout data of the International Diffuse Reflectance Conference (IDRC) in 2016. We can obtain it from http://www.idrc-chambersburg.org/content.aspx?page_id=22&club_id=409746&module_id=191116. The wavelength range of the manufacturer A was 730 nm–1100 nm and the interval was 0.5 nm. The dataset only provides the reference protein values. In this paper, we take the first instrument of manufacturer A as ‘master instrument’ and the second instrument as ‘slave instrument’. Figure 8B shows the difference between the spectra measured on the A1 and A2 instruments.

The third dataset came from the IDRC shootout 2002, which contains 655 pharmaceutical tablets measured on two spectrometers, with the range from 600 to 1898 nm, and the interval was 2 nm. We can obtain it from http://www.eigenvector.com/data/tablets/index.html. There are three reference values associated with this dataset, but we were only interested in weight content for each sample. The difference between the spectra in the pharmaceutical tablet dataset is shown in Figure 8C.

3.3. Determination of the Optimal Parameters

PLS is a widely used multivariate calibration technique. PLS applies score vectors model the relationship between and . It projects and into a PLS subspace, a low-dimensional space defined by a small number of the score vectors. The mean-centered and are decomposed as follows: where is the score matrix, and represent loadings matrix for and , respectively. and are the matrices of residuals corresponding to and .
The matrix of regression coefficients is: where is the weight matrix.
With the regression coefficient matrix , we can have the predicted values: 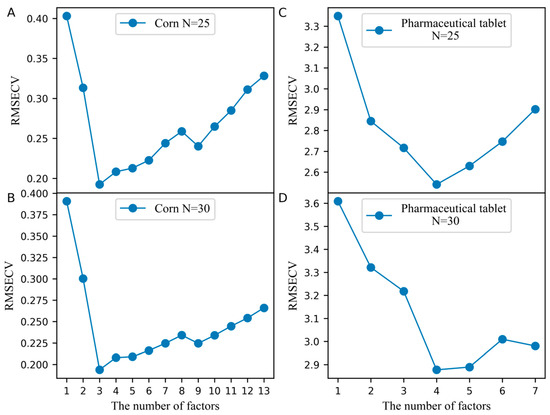 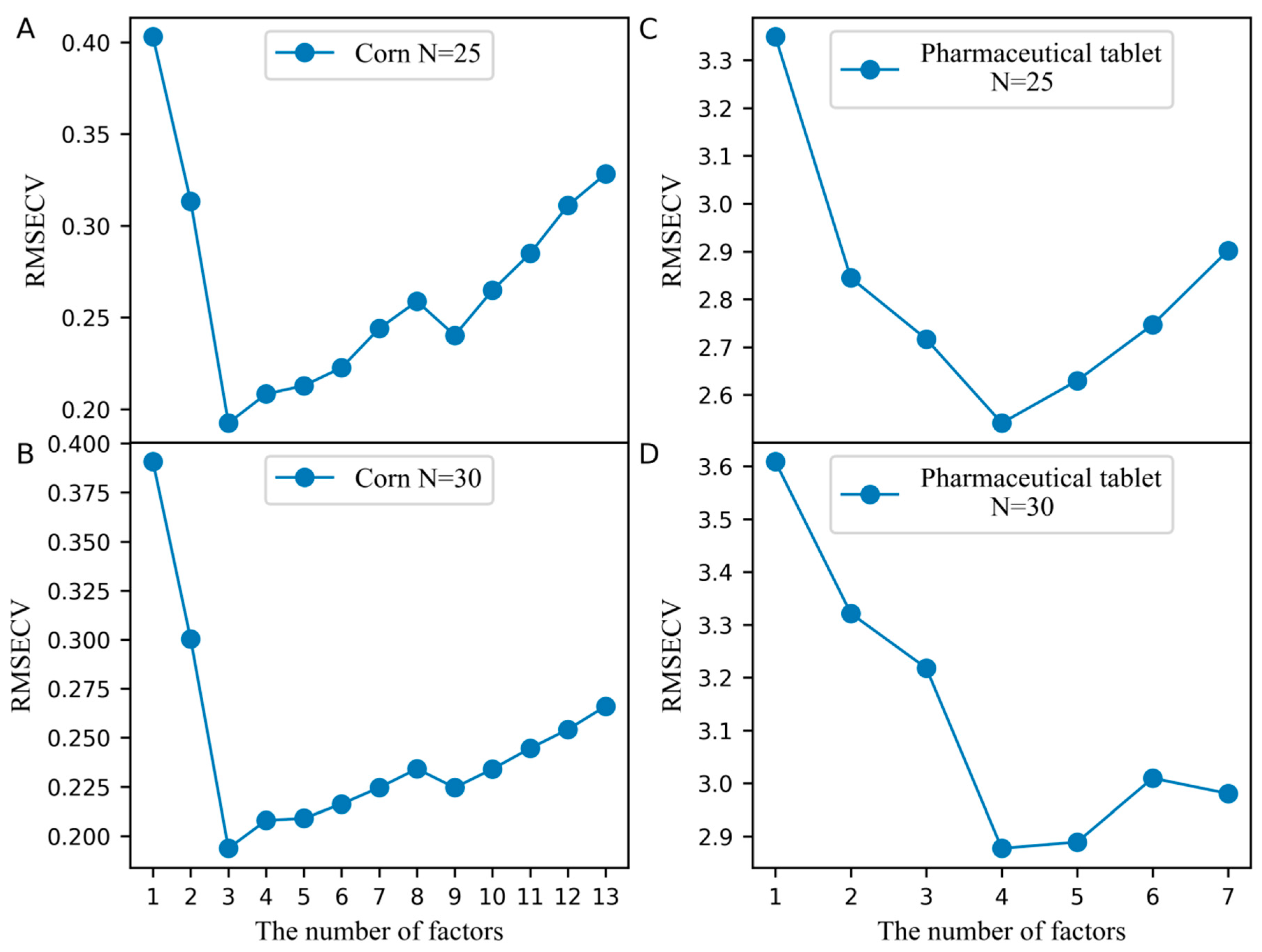 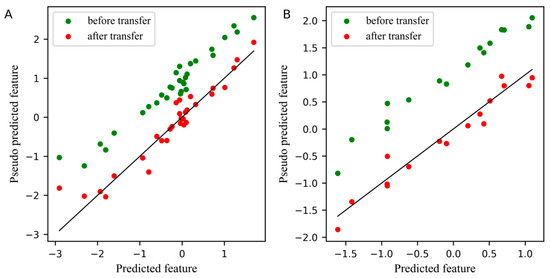 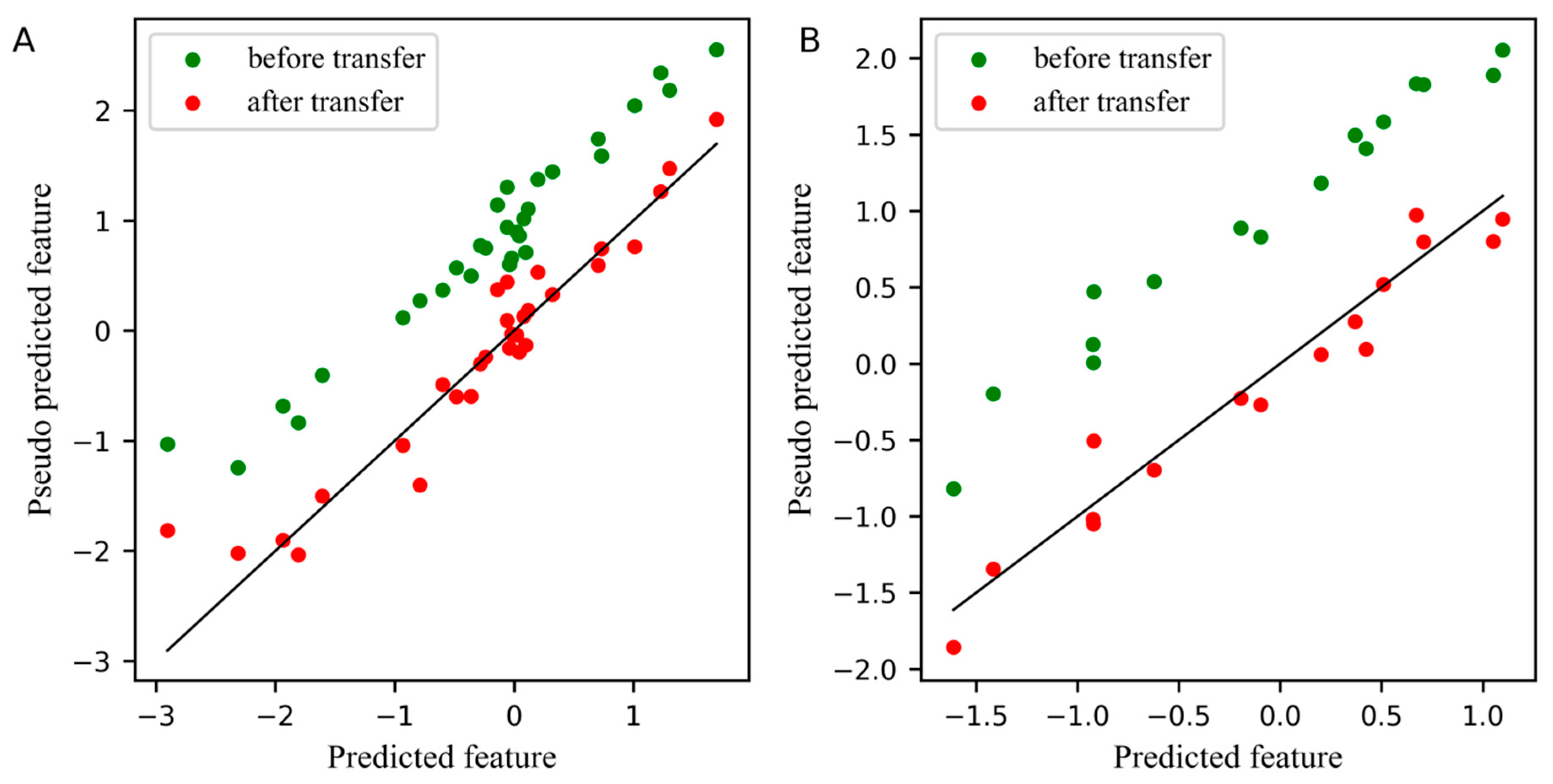 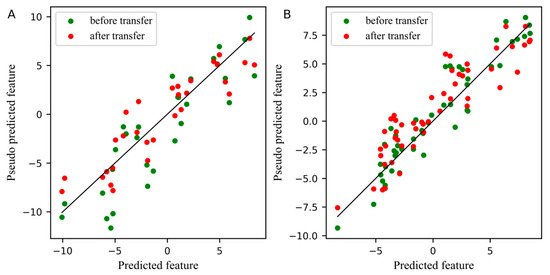 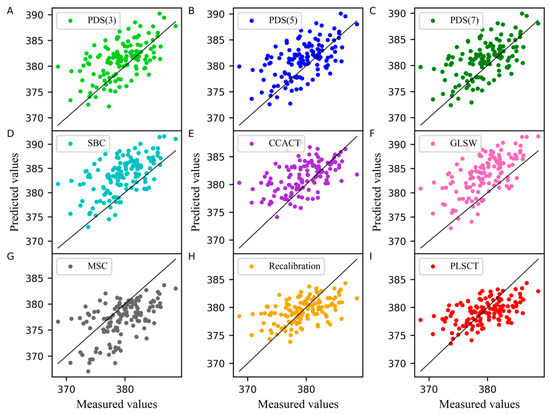 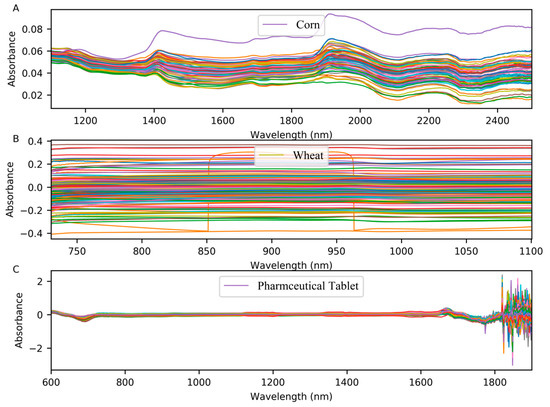