Synthesis, In Silico, and In Vitro Evaluation of Anti-Leishmanial Activity of Oxadiazoles and Indolizine Containing Compounds Flagged against Anti-Targets
Next Article in Special Issue

Anti-Herpetic, Anti-Dengue and Antineoplastic Activities of Simple and Heterocycle-Fused Derivatives of Terpenyl-1,4-Naphthoquinone and 1,4-Anthraquinone
Previous Article in Special Issue

Interactive Effects of Light and Melatonin on Biosynthesis of Silymarin and Anti-Inflammatory Potential in Callus Cultures of Silybum marianum (L.) Gaertn.

Silybin Modulates Collagen Turnover in an In Vitro Model of NASH

Silybin has been proposed as a treatment for nonalcoholic steatohepatitis (NASH). In this study, we assessed the effect of Silybin in a well-established in vitro coculture model of early-stage NASH. LX2 and Huh7 cells were exposed to free fatty acid (FFA) and Silybin as mono- or coculture (SCC). Cell viability, LX2 activation, collagen deposition, metalloproteinase 2 and 9 (MMP2-9) activity, and ROS generation were determined at 24, 96, and 144 h. Exposure to FFA induced the activation of LX2 as shown by the increase in cell viability and upregulation of collagen biosynthesis. Interestingly, while cotreatment with Silybin did not affect collagen production in LX2, a significant reduction was observed in SCC. MMP2-9 activity was reduced in FFA-treated Huh7 and SCC and cotreatment with Silybin induced a dose-dependent increase, while no effect was observed in LX2. Silybin also showed antioxidant properties by reducing the FFA-induced production of ROS in all the cell systems. Based on these data, Silybin exerts its beneficial effects by reducing LX2 proliferation and ROS generation. Moreover, MMP2-9 modulation in hepatocytes represents the driving mechanism for the net reduction of collagen in this NASH in vitro model, highlighting the importance of hepatic cells interplay in NASH development and resolution. View Full-Text
Keywords: NAFLD; NASH; Silybin; fibrogenesis; coculture model; hepatic stellate cells NAFLD; NASH; Silybin; fibrogenesis; coculture model; hepatic stellate cells
►▼ Show Figures 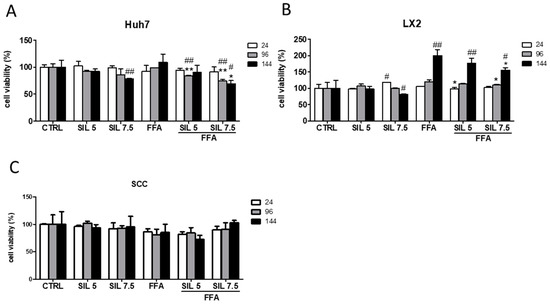