The problem of an aging society is becoming increasingly acute. Diseases related to aging also come with it. There are some diseases that people can’t treat fundamentally. Therefore, people try to find a natural ingredient from natural medicine to treat these diseases and improve the quality of life of the elderly. With the screening of a large number of traditional Chinese medicines, we found that polysaccharides from Rehmannia glutinous (PRG) can prolong the lifespan of Caenorhabditis elegans (C. elegans). Neutral polysaccharide is the main component of PRG. In the present study, we used a C. elegans model to illustrate the stress resistance and lifespan extension effect and mechanism of two kinds of neutral polysaccharide fractions from Rehmannia glutinosa (NPRG), respectively called NPRRP and NPRR. Our data showed that two kinds of neutral polysaccharides fractions could extend the lifespan and delay senescence of wild-type worms. Moreover, the mechanism study revealed that NPRG was able to promote the nuclear localization of DAF-16 resulting in the activation of antioxidant enzymatic systems under oxidative stress. We also observed that NPRG didn’t increase the lifespan of mutants with daf-16 portion loss of function, suggesting NPRG prolonging the lifespan partially required the daf-16 gene on the insulin/IGF-1 signaling pathway (IIS). NPRG was found to have no effect on Escherichia coli OP50 (E. coli OP50) growth and pharyngeal pump movement of nematodes, indicating that the anti-aging effect of NPRG is not realized by the caloric restriction. However, mRNA levels of daf-2 were remarkably decreased after NPRG treatment. Thus daf-2 lost its inhibitory effect on the expression of daf-16 and had a continuous stimulation effect on the IIS, then prolonged the life of nematodes. Overall, our results illustrated the potential utilization of NPRG as a functional pharmaceutical ingredient to increase stress resistance and extend the life of C. elegans via the IIS, which could be developed as a natural supplement agent. View Full-Text
Keywords: lifespan extension; insulin/IGF-1 signaling pathway; neutral polysaccharides; Rehmannia glutinosa; stress resistance lifespan extension; insulin/IGF-1 signaling pathway; neutral polysaccharides; Rehmannia glutinosa; stress resistance
►▼ Show Figures 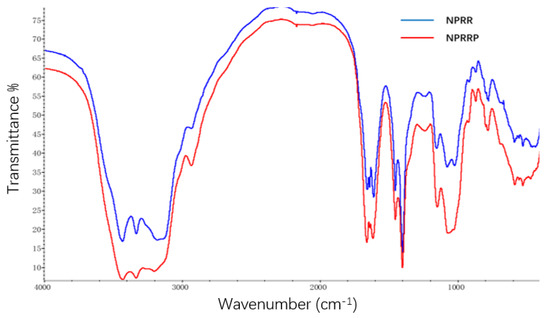