Potato Protein Fining of Phenolic Compounds in Red Wine: A Study of the Kinetics and the Impact of Wine Matrix Components and Physical Factors
Previous Article in Special Issue

FePc and FePcF16 on Rutile TiO2(110) and (100): Influence of the Substrate Preparation on the Interaction Strength

Interface properties of iron phthalocyanine (FePc) and perfluorinated iron phthalocyanine (FePcF16) on rutile TiO2(100) and TiO2(110) surfaces were studied using X-ray photoemission spectroscopy (XPS), X-ray absorption spectroscopy (XAS), and low-energy electron diffraction (LEED). It is demonstrated that the interaction strength at the interfaces is considerably affected by the detailed preparation procedure. Weak interactions were observed for all studied interfaces between FePc or FePcF16 and rutile, as long as the substrate was exposed to oxygen during the annealing steps of the preparation procedure. The absence of oxygen in the last annealing step only had almost no influence on interface properties. In contrast, repeated substrate cleaning cycles performed in the absence of oxygen resulted in a more reactive, defect-rich substrate surface. On such reactive surfaces, stronger interactions were observed, including the cleavage of some C–F bonds of FePcF16. View Full-Text
Keywords: rutile; iron phthalocyanine; interfaces; photoemission; X-ray absorption rutile; iron phthalocyanine; interfaces; photoemission; X-ray absorption
►▼ Show Figures 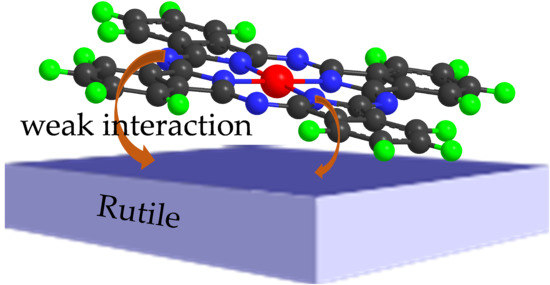