Ragworms (Hediste diversicolor) cultured under integrated multi-trophic aquaculture (IMTA) conditions display an improved fatty acids (FA) profile than conspecifics from the wild, thus being more suitable for maturation diets of marine fish and shrimp. Nonetheless, their use may represent a potential pathway for pathogens. The objective of the present study was to determine if high-pressure processing (HPP), as an approach to safeguard microbiological safety, could promote significant shifts on the FA profiles of different sized ragworms. An analysis of similarities (ANOSIM) revealed the existence of significant differences in the FA profile and lipid quality indexes (atherogenicity (AI), thrombogenicity (TI) and polyene (PI)) of control and HPP treated ragworms of all tested sizes (small, medium and large). Saturated (SFA) and monounsaturated FA (MUFA) increased after HPP, while polyunsaturated FA (PUFA; FA with 2 or 3 double bonds) and highly unsaturated FA (HUFA; FA with ≥ 4 double bonds) decreased. The amount of docosahexaenoic acid (DHA) in polychaetes exposed to HPP decreased an average of 25%, when compared with the levels recorded in control groups. The values of PI significantly decreased after HPP, while those of AI and TI displayed a significant increase. Despite the shifts in the FA profile of ragworms exposed to HPP, these still display a superior profile to that of wild specimens, namely the presence of DHA. Therefore, HPP can be considered as a suitable approach to safeguard the biosecurity of cultured polychaetes, without compromising their nutritional value, and support the principles of circular economy through the use of IMTA. View Full-Text
Keywords: integrated multi-trophic aquaculture; highly unsaturated fatty acids (HUFA); docosahexaenoic acid (DHA); biosecurity integrated multi-trophic aquaculture; highly unsaturated fatty acids (HUFA); docosahexaenoic acid (DHA); biosecurity
►▼ Show Figures 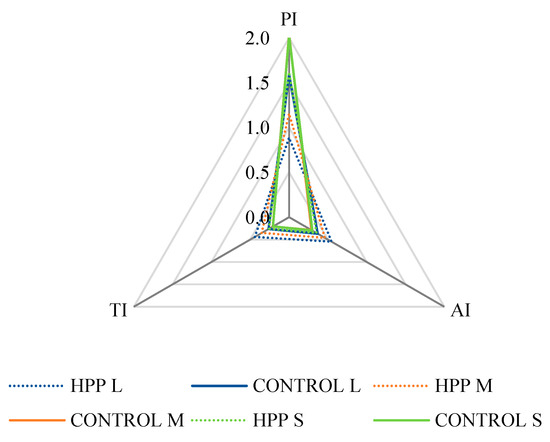