Kynurenines and the Endocannabinoid System in Schizophrenia: Common Points and Potential Interactions

Oleoyl serine (OS), an endogenous fatty acyl amide (FAA) found in bone, has been shown to have an anti-osteoporotic effect. OS, being an amide, can be hydrolyzed in the body by amidases. Hindering its amide bond by introducing adjacent substituents has been demonstrated as a successful method for prolonging its skeletal activity. Here, we tested the therapeutic efficacy of two methylated OS derivatives, oleoyl α-methyl serine (HU-671) and 2-methyl-oleoyl serine (HU-681), in an ovariectomized mouse model for osteoporosis by utilizing combined micro-computed tomography, histomorphometry, and cell culture analyses. Our findings indicate that daily treatment for 6 weeks with OS or HU-671 completely rescues bone loss, whereas HU-681 has only a partial effect. The increased bone density was primarily due to enhanced trabecular thickness and number. Moreover, the most effective dose of HU-671 was 0.5 mg/kg/day, an order of magnitude lower than with OS. The reversal of bone loss resulted from increased bone formation and decreased bone resorption, as well as reversal of bone marrow adiposity. These results were further confirmed by determining the serum levels of osteocalcin and type 1 collagen C-terminal crosslinks, as well as demonstrating the enhanced antiadipogenic effect of HU-671. Taken together, these data suggest that methylation interferes with OS’s metabolism, thus enhancing its effects by extending its availability to its target cells. View Full-Text
Keywords: bone lipids; N-acyl amide; oleoyl serine; osteoporosis; bone marrow adiposity bone lipids; N-acyl amide; oleoyl serine; osteoporosis; bone marrow adiposity
►▼ Show Figures 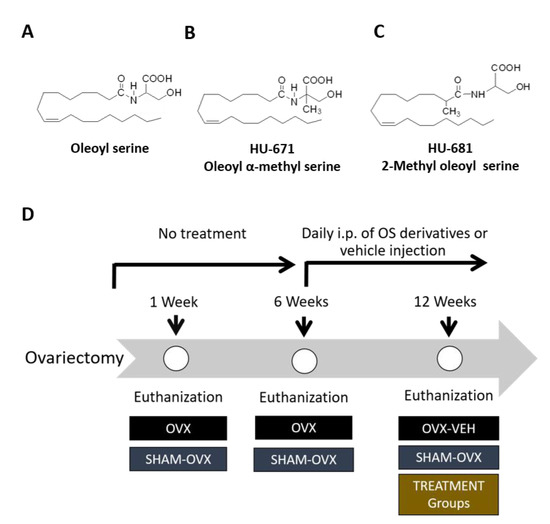