Unambiguous Characterization of p-Cresyl Sulfate, a Protein-Bound Uremic Toxin, as Biomarker of Heart and Kidney Disease

p-Cresyl sulfate is one of the bound uremic toxins whose level increases in the sera of patients with the severity of chronic kidney disease and is therefore used as a standard for clinical investigations. Our first attempts to obtain p-cresyl sulfate led exclusively to the product of sulfonation of the aromatic ring instead of sulfation on the OH moiety. Nevertheless, this initial discouraging result allowed us to handle both p-cresyl sulfate and 2-hydroxy-5-methylbenzenesulfonic acid obtained by different synthetic pathways. Interestingly, the comparison between the two isomers pointed out that the two molecules show the same fragmentation pattern and are indistinguishable by mass spectrometry. They cannot be separated on several commercially available columns. The only difference between the two compounds is a 10-fold higher ionization yield under negative ion electrospray ionization. NMR spectral studies definitely confirmed the different molecular structures. We present here an unambiguous biomimetic synthetic route for p-cresyl sulfate and the spectroscopic characterization of both the compounds by nuclear magnetic resonance and mass spectrometry. View Full-Text
Keywords: p-cresyl sulfate; chronic kidney disease (CKD); urine; mass spectrometry; HPLC; bioanalysis p-cresyl sulfate; chronic kidney disease (CKD); urine; mass spectrometry; HPLC; bioanalysis
►▼ Show Figures 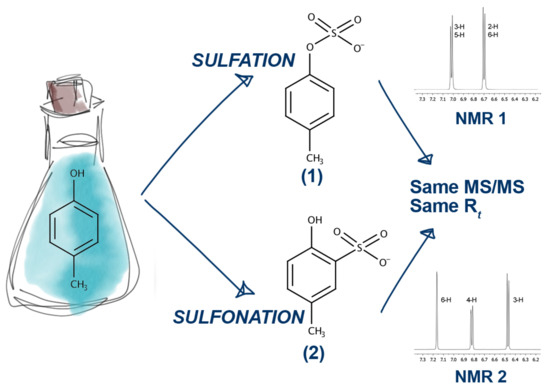