Study of the Intrinsic Fluorescence of a Highly Branched Cationic Dendrimer, Poly(Ethyleneimine) (PEI)

We report a universal smart probe (SP) that is capable of detecting several homologous let-7 microRNAs (miRNAs). While the SP is complementary to let-7a, and therefore, strongly binds to this target, due to sequence homology, the SP also has equal propensity to non-specifically hybridize with let-7b and let-7c, which are homologous to let-7a. The fluorescence signal of the SP was switched off in the absence of any homologous member target, but the signal was switched on when any of the three homologous members was present. With the assistance of nucleic acid blockers (NABs), this SP system can discriminate between homologous miRNAs. We show that the SP can discriminate between let-7a and the other two sequences by using linear NABs (LNABs) to block non-specific interactions between the SP and these sequences. We also found that LNABs used do not cross-react with the let-7a target due to the low LNABs:SP molar ratio of 6:1 used. Overall, this SP represents a universal probe for the recognition of a homologous miRNA family. The assay is sensitive, providing a detection limit of 6 fmol. The approach is simple, fast, usable at room temperature, and represents a general platform for the in vitro detection of homologous microRNAs by a single fluorescent hairpin probe. View Full-Text
Keywords: homologous microRNAs; universal smart probe; let-7 microRNAs; mixed-base nucleic acids; linear nucleic acid blockers; LNABs homologous microRNAs; universal smart probe; let-7 microRNAs; mixed-base nucleic acids; linear nucleic acid blockers; LNABs
►▼ Show Figures 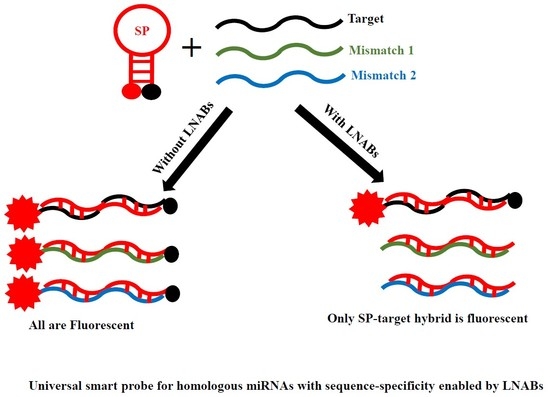