The dispersion of para-nitroaniline (p-NA) in water poses a threat to the environment and human health. Therefore, the development of functional adsorbents to remove this harmful compound is crucial to the implementation of wastewater purification strategies, and electrospun mats represent a versatile and cost-effective class of materials that are useful for this application. In the present study, we tested the ability of some polyethersulfone (PES) nanofibers containing adsorbed porphyrin molecules to remove p-NA from water. The functional mats in this study were obtained by two different approaches based on fiber impregnation or doping. In particular, meso-tetraphenyl porphyrin (H2TPP) or zinc(II) meso-tetraphenyl porphyrin (ZnTPP) were immobilized on the surface of PES fiber mats by dip-coating or added to the PES electrospun solution to obtain porphyrin-doped PES mats. The presence of porphyrins on the fiber surfaces was confirmed by UV–Vis spectroscopy, fluorescence measurements, and XPS analysis. p-NA removal from water solutions was spectrophotometrically detected and evaluated.
Keywords: porphyrin; para-nitroaniline; polyethersulfone; electrospinning; wastewater treatment porphyrin; para-nitroaniline; polyethersulfone; electrospinning; wastewater treatment

Amines are used for many applications, but their release in the environment needs to be carefully monitored and controlled. Para-nitroaniline (p-NA) is a harmful compound due to its hematoxicity, splenotoxicity, hepatoxicity, and nephrotoxicity: accordingly, its dispersion in water strongly affects human health and represents a huge threat to the environment [1,2,3]. p-NA is resistant to chemical and biological oxidation degradation due to the presence of a nitro group linked to the aromatic ring. Therefore, the development of cost-effective membranes able to adsorb p-NA from aqueous solutions represents an alternative strategy to other treatments for wastewater purification (e.g., advanced oxidation processes, extraction, or biodegradation), and from this perspective, different types of adsorbents have been investigated and utilized to remove p-NA [4,5,6,7,8,9]. Recently, electrospun fibrous mats composed of a wide variety of polymers have been successfully applied in various fields, such as nanocatalysis [10,11,12], filtration [13,14,15,16], healthcare [17,18,19], biotechnology [20,21,22], security, and environmental control [23,24,25,26]. Polyethersulfone (PES) mats are largely used in membrane technology for water treatment due to their insolubility in water as well as their good mechanical and thermal properties [27,28,29]. Moreover, functionalized PES fibers have proved to be effective for applications in photocatalysis [24,30] and heavy metal removal [23,31,32,33], and electrospun fibers functionalized with porphyrins are suitable for the detection and removal of unwanted pollutants in air and water. In fact, porphyrins and metallo-porphyrins are widely used for developing sensing systems due to their coordination sites for axial ligation and significant optical modifications which provide evidence of successful core complexation [34]. In particular, zinc(II) meso-tetraphenyl porphyrin (ZnTPP) and meso-tetraphenyl porphyrin (H2TPP) have been used to optically detect NH3 and gaseous amines [35,36]. Therefore, the immobilization of these versatile macrocycles on surfaces is fundamental to obtain active layers devoted to molecular recognition in gas or liquid phase, and various techniques have been proposed to obtain porphyrin layers on substrates [37,38].
In this general panorama, the aim of our work was to test the ability of porphyrin-modified PES nanofibers to remove p-NA from water. To our knowledge, little data reporting the use of electrospun mats as adsorbents to remove p-NA from water is available. In particular, herein we functionalized PES fibers with meso-tetraphenyl porphyrin (H2TPP) or zinc(II) meso-tetraphenyl porphyrin (ZnTPP) to exploit the ability of these porphyrins to coordinate amino and/or nitro groups of p-NA (Figure 1).
Porphyrin-loaded fibers were prepared using two different approaches: H2TPP or ZnTPP were immobilized on the surface of PES mats by i) dip-coating in porphyrin solutions (impregnation); or ii) by adding H2TPP or ZnTPP to the PES electrospinning solution to obtain porphyrin-doped PES mats. The presence of porphyrins on the fiber was confirmed by UV–Vis spectroscopy, fluorescence measurements, and XPS analysis, and p-NA removal from water solutions was spectrophotometrically detected and evaluated.

The H2TPP extinction (ε) coefficient at 418 nm (in toluene) is 525,000 M−1cm−1, while for ZnTPP (in toluene) at 422 nm ε is 537,000 M−1cm−1 [29]. Samples of PES fibers having a 2 × 2 cm2 dimension were dipped for times ranging from 30 min up to 2 h in 10 mL of 5 μM H2TPP or ZnTPP toluene solutions. No stirring was applied. The absorbance of these porphyrin solutions was checked every 15 min. After dipping, mats were washed in water and dried in air. There was no release of porphyrins in water, even after 1 h sonication, as confirmed by UV–Vis spectra.

Briefly, 2.5 g of PES and appropriate aliquots of ZnTPP or H2TPP, corresponding to 6% w/w, were dissolved in 5 mL of toluene and 5 mL of DMF, respectively, under vigorous stirring at 40 °C to obtain the electrospinning solutions. Each spinning solution was placed in a syringe and pumped with a rate of 30 μL/min. A high-voltage power supply was used to generate a potential difference of 24 kV between the spinneret and an aluminum-foil-covered grounded metallic drum, rotating at 200 rpm, placed at a working distance (WD) of 15 cm. All the experiments were carried out at 25° C. After electrospinning, fibers were dried in air for 24 h.

Dipping solutions of p-NA [5 μM] were prepared in ultrapure water and checked by UV–Vis absorption spectra (ε = 13,500 M−1cm−1). The absorption measurements were performed by dipping porphyrin functionalized mats (electrospun or impregnated) of dimensions 2 × 2 cm2 into 10 mL of this aqueous p-NA solution (pH = 7). Absorption spectra of treated p-NA solutions were recorded every 15 min after mats’ dipping.

Nanofiber morphologies and diameters were evaluated using a field emission scanning electron microscope (Zeiss Supra 55-VP FEGSEM). To spectroscopically evaluate the presence of porphyrins on impregnated or electrospun mats, samples were dissolved in 1:1 toluene:DMF solutions. Absorbance intensities of the 3.6 μM solutions of ZnTPP in the presence and absence of PES were compared (Figure S4) to determine the role of PES in the porphyrin absorbance. A Jasco V-560 UV–Vis spectrophotometer equipped with a 1 cm path-length cell was used for the UV–Vis measurements. For fluorescence measurements a Fluorolog FL-11 Jobin-Yvon Horiba was used. Each experiment was carried out at 25 °C. X-ray photoelectron spectra (XPS) were measured with a PHI 5600 Multi Technique System (base pressure of the main chamber 3 × 10−8 Pa) [45,53]. Samples were excited with Al Kα X-ray radiation using a pass energy of 5.85 eV. The instrumental energy resolution was ≤0.5 eV. XPS peak intensities were obtained after a Shirley background removal [45,53]. Spectral calibration was achieved by fixing the main C 1s peak at 285.0 eV [45,53]. Structures due to the Al-Kα X-ray satellites were subtracted prior to data processing. The atomic concentration analysis was performed by taking into account the relevant atomic sensitivity factors. The samples were repetitively sonicated/washed in water before XPS analyses.

The combination of H2TPP or ZnTPP with PES electrospun mats resulted in the effective removal of p-NA from water. Both adopted fabrication approaches confirmed the role of porphyrins in p-NA immobilization on PES surfaces with respect to bare PES mats, but further investigations are required to improve the adsorption capacity in order to have a reliable comparison with other adsorbents [4,5,6,7,8,9,54]. XPS analysis confirmed the presence of p-NA on the fiber surfaces: due to the sampling depth of this technique (limited to a few nanometers), no significant differences between the surface compositions of H2TPP/PES and ZnTPP/PES mats were detected. Nevertheless, UV–Vis analysis pointed out the role of porphyrin organization on the removal efficiency. In particular, ZnTPP-impregnated mats showed better performances than their H2TPP-treated counterparts. In contrast, H2TPP/PES electrospun mats were remarkably more efficient than ZnTPP/PES mats. These results indicate a limited availability of Zn2+ ions for the axial coordination of N donor atoms in electrospun mats. Note that the p-NA absorption efficiency of both impregnated and electrospun H2TPP containing mats was comparable, despite the different amounts of incorporated porphyrins. Accordingly, we suppose that the interaction of p-NA with H2TPP depends only on the amount of porphyrin located on the surface, which should be similar in both types of fiber. The study of the spatial organization of porphyrin during electrospinning, and on the influence of the working parameters on mats’ response to the detection and removal of p-NA, is an ongoing work. 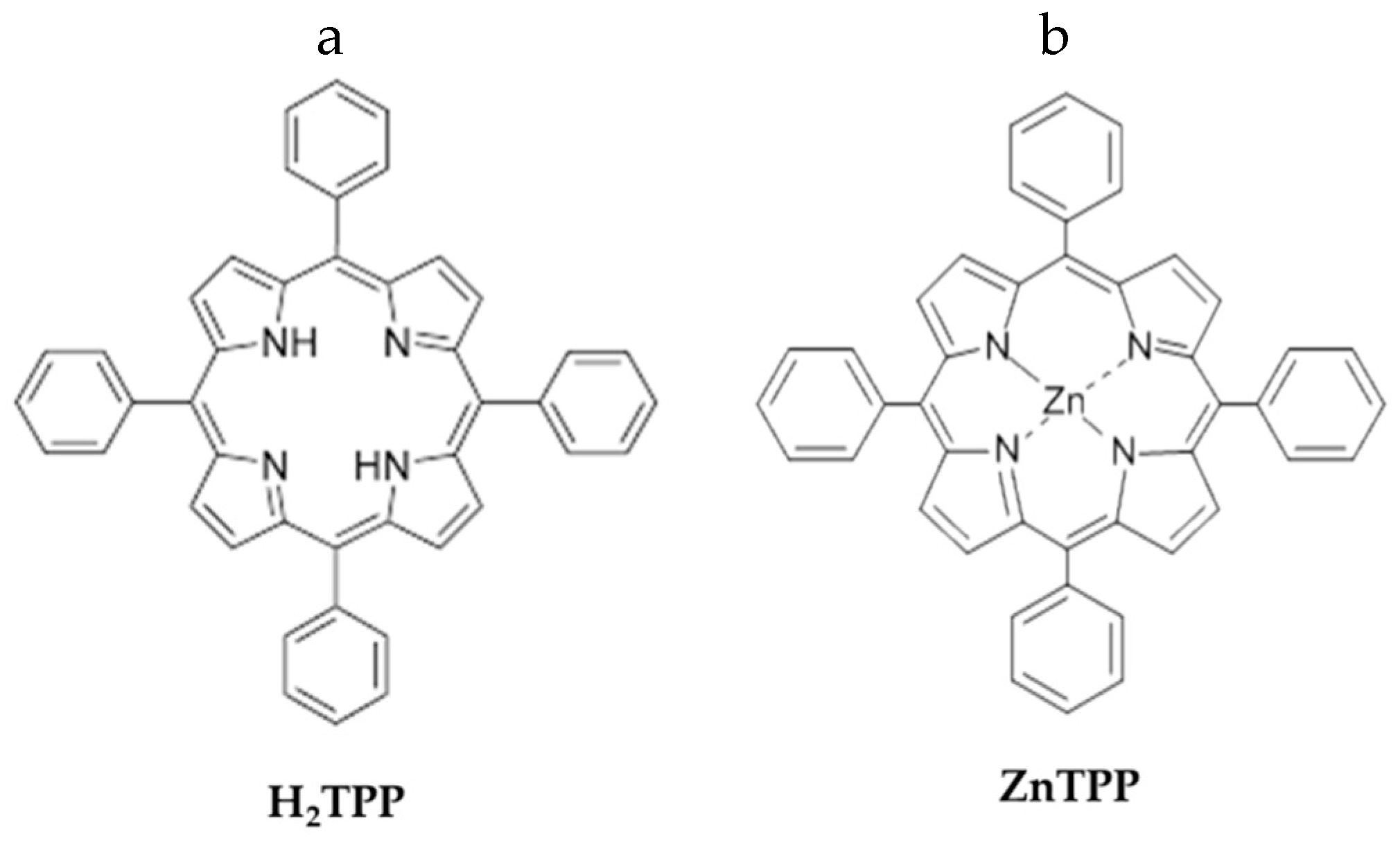 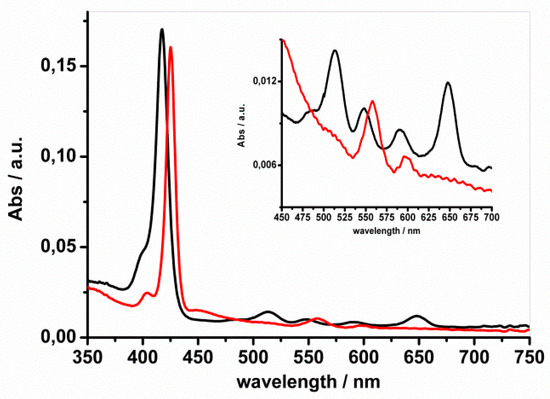 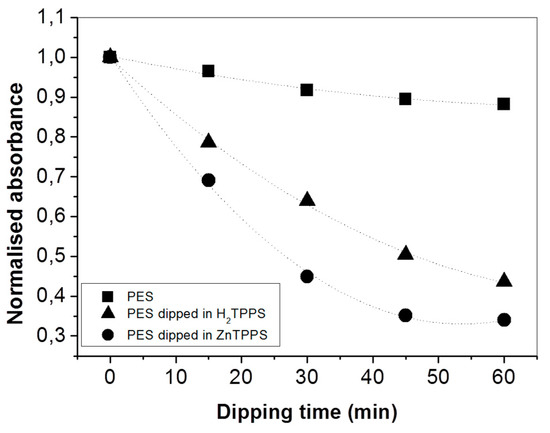 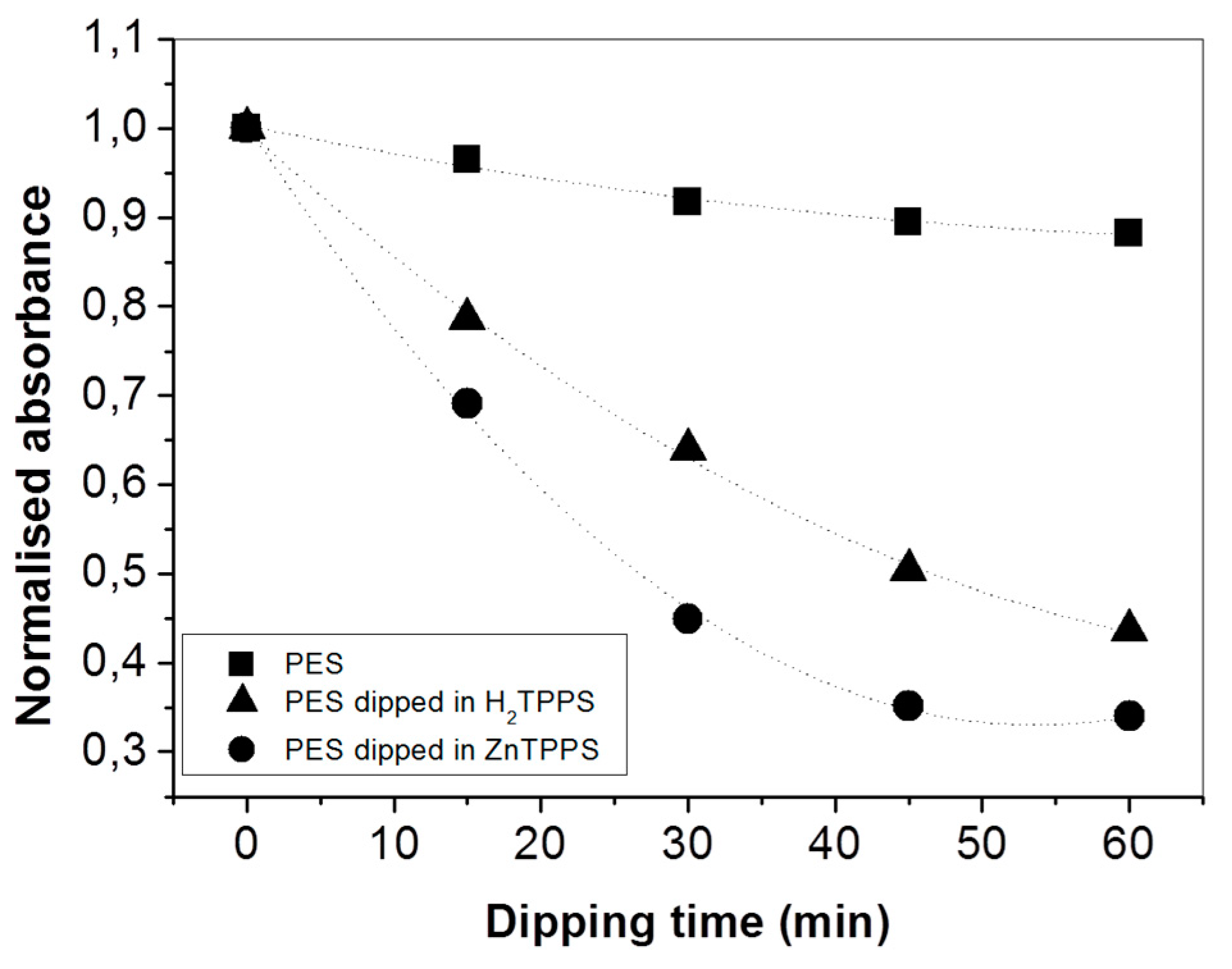 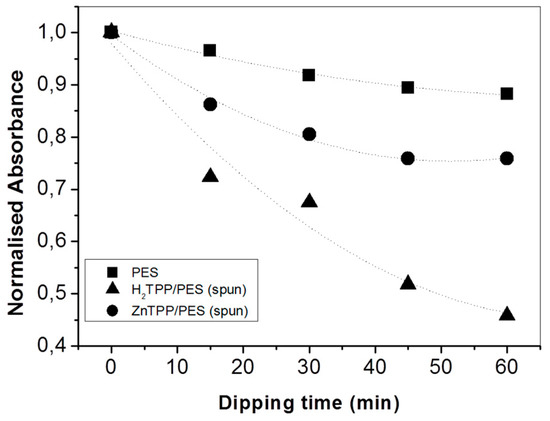 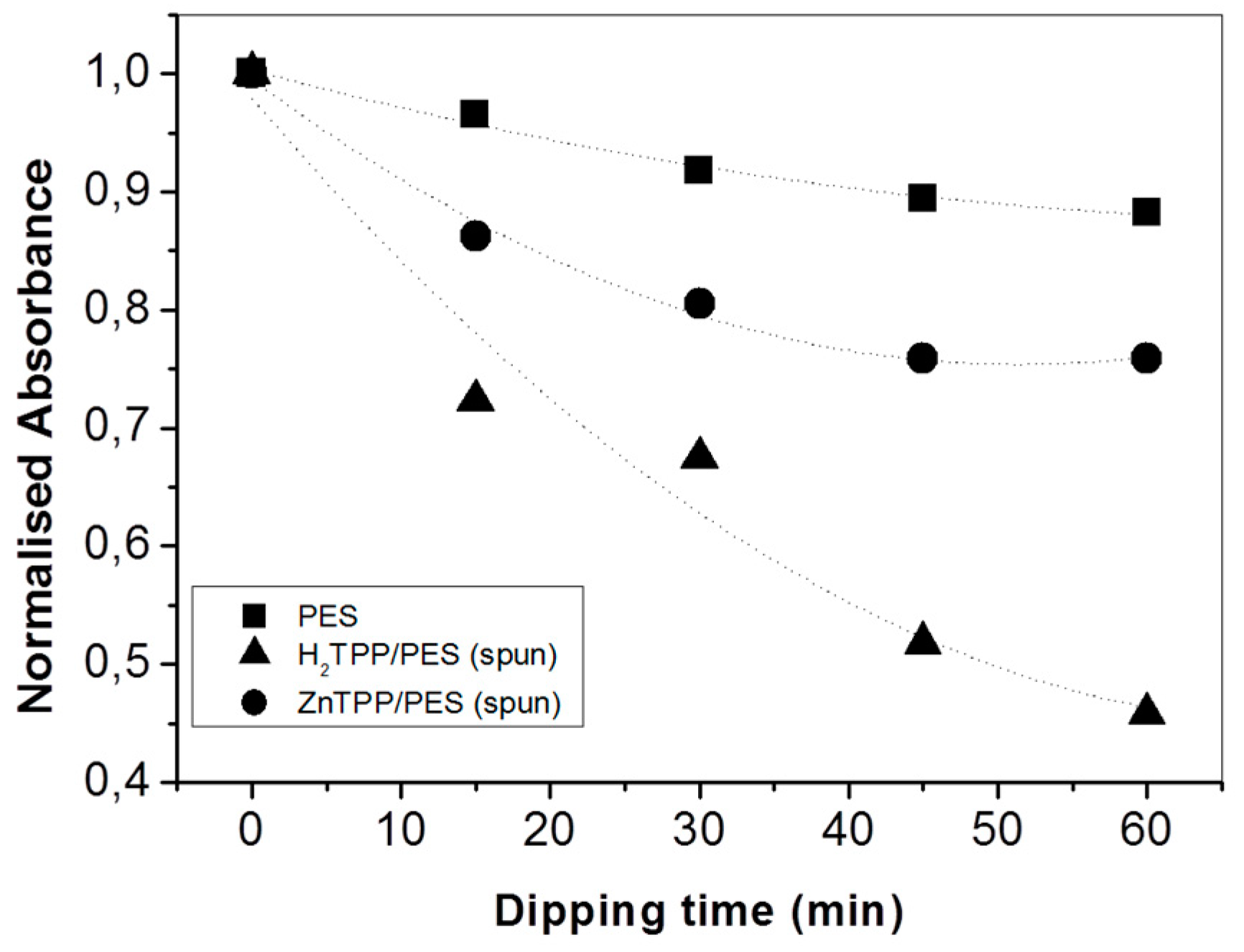 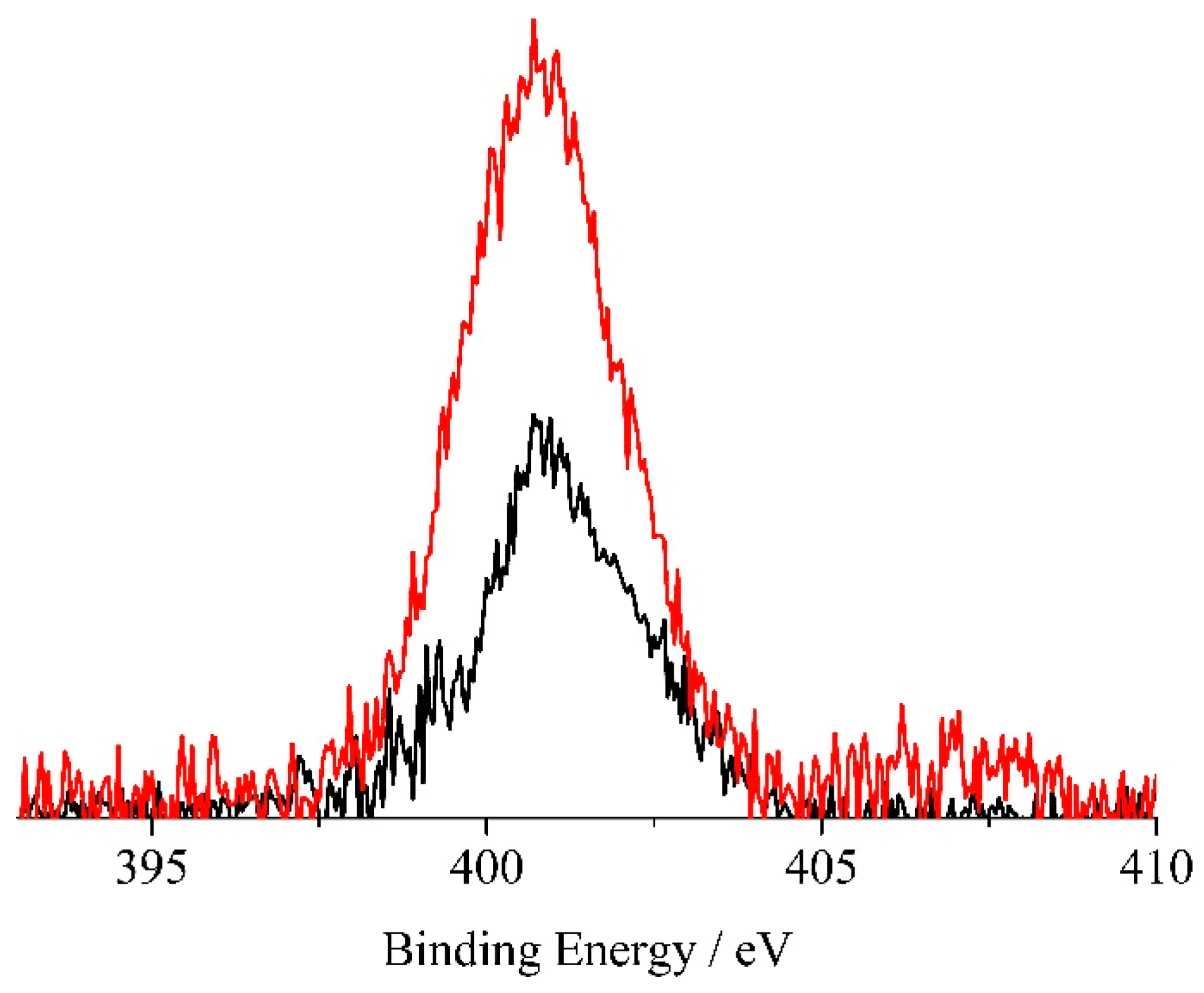 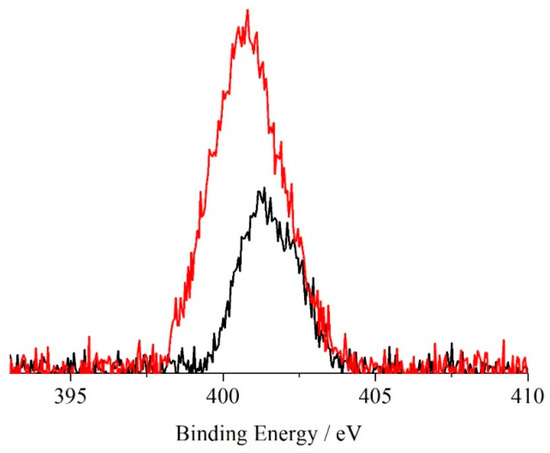