Starches from the bulbils of Dioscoreae opposita Thunb. cv. Tiegun were isolated by aqueous steeping (SBS), enzyme extraction (EBS), and alkaline extraction (ABS) methods, respectively. The physicochemical, mineral composition, thermal and morphological characteristics of these starches were investigated. The starch granules were oval, spherical and kidney-shaped and its crystal type is a mixture of A-type and B-type patterns. The starches having larger average granule size showed more amylose and phosphorus contents than those with smaller average granule size. Differential scanning calorimetry (DSC) showed that the SBS had an endothermic transition ranging from 65.8 °C to 76.3 °C with an enthalpy of 2.0 J/g. The endothermic transitions of ABS and EBS showed the regions of 67.9 °C to 73.0 °C, and 66.8 °C to 82.0 °C, respectively. The gelationization enthalpies of ABS and EBS were 13.8 and 11.5 J/g, respectively. Additionally, ABS presented greater clarity in comparison with EBS and SBS. Pasting properties indicated that ABS had the highest peak viscosity, breakdown, but SBS had the lowest trough, final viscosity, setback, and pasting temperature. Generally, ABS and EBS could be used as food thickener or frozen food additives. SBS and EBS were potential technological alternatives in quality preservation of frozen starch-based products and other industrial applications. View Full-Text
Keywords: Dioscoreae opposita Thunb. cv. Tiegun; Starch; Different extraction methods; Physicochemical and functional properties Dioscoreae opposita Thunb. cv. Tiegun; Starch; Different extraction methods; Physicochemical and functional properties
►▼ Show Figures 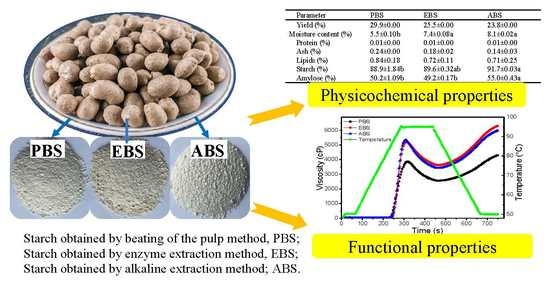