Isolation and Purification of Galloyl, Caffeoyl, and Hexahydroxydiphenoyl Esters of Glucoses from Balanophora simaoensis by High-Speed Countercurrent Chromatography and Their Antioxidant Activities In Vitro
Previous Article in Special Issue

Herein, we present the first evaluation of cationic dendrimers based on 2,2-bis(methylol)propionic acid (bis-MPA) as nonviral vectors for transfection of short interfering RNA (siRNA) in cell cultures. The study encompassed dendrimers of generation one to four (G1–G4), modified to bear 6–48 amino end-groups, where the G2–G4 proved to be capable of siRNA complexation and protection against RNase-mediated degradation. The dendrimers were nontoxic to astrocytes, glioma (C6), and glioblastoma (U87), while G3 and G4 exhibited concentration dependent toxicity towards primary neurons. The G2 showed no toxicity to primary neurons at any of the tested concentrations. Fluorescence microscopy experiments suggested that the dendrimers are highly efficient at endo-lysosomal escape since fluorescently labeled dendrimers were localized specifically in mitochondria, and diffuse cytosolic distribution of fluorescent siRNA complexed by dendrimers was observed. This is a desired feature for intracellular drug delivery, since the endocytic pathway otherwise transfers the drugs into lysosomes where they can be degraded without reaching their intended target. siRNA-transfection was successful in C6 and U87 cell lines using the G3 and G4 dendrimers followed by a decrease of approximately 20% of target protein p42-MAPK expression. View Full-Text
Keywords: dendrimer; siRNA; RNAi; bis-MPA; monodisperse; polycation dendrimer; siRNA; RNAi; bis-MPA; monodisperse; polycation
►▼ Show Figures 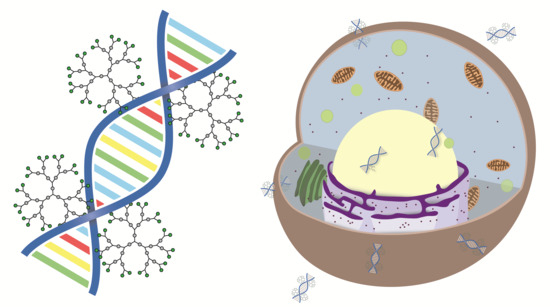