Many studies have demonstrated that berberine inhibited the cell migration and invasion in human cancer cell lines. However, the exact molecular mechanism of berberine inhibiting the cell migration and invasion of human melanoma A375.S2 and A375.S2/PLX (PLX4032 induced resistant A375.S2) skin cancer cells remains unknown. In this study, we investigated the anti-metastasis mechanisms of berberine in human melanoma cancer A375.S2 cells and A375.S2/PLX resistant cells in vitro. Berberine at low concentrations (0, 1, 1.5 and 2 μM) induced cell morphological changes and reduced the viable cell number and inhibited the mobility, migration, and invasion of A375.S2 cells that were assayed by wound healing and transwell filter. The gelatin zymography assay showed that berberine slightly inhibited MMP-9 activity in A375.S2 cells. Results from western blotting indicated that berberine inhibited the expression of MMP-1, MMP-13, E-cadherin, N-cadherin, RhoA, ROCK1, SOS-1, GRB2, Ras, p-ERK1/2, p-c-Jun, p-FAK, p-AKT, NF-κB, and uPA after 24 h of treatment, but increased the PKC and PI3K in A375.S2 cells. PLX4032 is an inhibitor of the BRAFV600E mutation and used for the treatment of cancer cells harboring activated BRAF mutations. Berberine decrease cell number and inhibited the cell mobility in the resistant A375.S2 (A375.S2/PLX, PLX4032 generated resistant A375.S2 cells). Based on these observations, we suggest that the potential of berberine as an anti-metastatic agent in melanoma that deserves to be investigated in more detail, including in vivo studies in future.
Keywords: berberine; human melanoma A375.S2; PLX4032; migration; invasion berberine; human melanoma A375.S2; PLX4032; migration; invasion

Skin cancer, including melanoma and non-melanoma skin cancer, is one of the most common types of malignancy in the white population and the incidence rate is increasing worldwide [1]. Melanoma, the most lethal skin cancer [2], is much more common in the white population than in other ethnic groups [3] and more frequent in males than in females; after age 75, the incidence of melanoma in males was almost three times that in females [4,5]. In the USA, melanoma is the fifth and seventh most common cancer among men and women, respectively [6]. Moreover, the metastatic melanoma has been recognized to be a highly aggressive malignancy and its morbidity has increased in the past years [7]. Current therapies for metastatic melanoma include chemotherapy and a variety of immunotherapeutic choices [7], however, these are still unsatisfactory. Therefore, numerous studies have focused on finding and identify new compounds from natural products for the treatment of melanoma.
Metastasis, the most important characteristic of malignant tumors, has been playing a critical role in the treatment efficacy and quality of life of patients with metastatic tumors [8]. Numerous pieces of evidence have shown that tumor cells can undergo migration, adhesion, and invasion via the lymphatic system and/or the bloodstream and they can undergo infiltration through the extracellular matrix (ECM) in order to form new tumors in other sites of the human body [9,10]. Tumor metastasis is a critical cause of cancer-related deaths [11] and is difficult to treat. ECM acts as a mechanical barrier to cell movement, thus, the degradation of the ECM is a vital step in the metastatic process [12]. Numerous pieces of evidence have shown that the matrix metalloproteinases (MMPs) degrade the ECM when facilitating a tumor invasion [13,14]. Inhibition of tumor metastasis will significantly increase the survival rate of cancer patients. Reports have shown that elevated levels of MMPs in melanoma were involved with the rapid progression of metastatic melanoma [15,16]. Thus, one of the treatments for metastasis melanoma could be blocking cancer cell migration and invasion.
Berberine, an isoquinoline alkaloid, can be isolated from the roots and bark of plants from the Berberis genus (Berberidaceae family) and other medical plants [17]. Berberines have biological activities such as anti-microbial [18], anti-inflammatory [19], antioxidant [20,21], and anti-cancer activities [22,23]. Numerous studies have shown that berberine decreased the cell number of many human cancer cell lines through the induction of the cell cycle arrest and apoptotic cell death [22,23,24,25]. Berberine inhibited the migration and invasion of human chondrosarcoma cells via the downregulation of the αvβ3 integrin through the protein kinase C (PKC δ), c-Src, and AP-1 [26]. Berberine suppressed the migration and invasion of prostate cancer cells through the suppression of epithelial–mesenchymal transition (EMT)-related genes [27] and inhibited the invasion and metastasis of colorectal cancer cells via the down-regulation of the COX-2/PGE2- JAK2/STAT3 signaling pathway [28]. Recently, it was reported that berberine induced the apoptosis of cells and inhibited the migration of skin squamous cell carcinoma A431 cells [29]. Based on these findings, it can be asserted that berberine suppressed the migration and invasion of cancer cells through multiple mechanisms on different tumor cell types. Thus, we investigated the molecular mechanism involved in cell metastasis in human melanoma cells in vitro and the results indicated that berberine suppressed the migration and invasion of A375.S2 cells in vitro through the FAK, uPA and NF-κB signaling pathways.

The results from the wound healing assay that were presented in Figure 2A,B showed that berberine treatment at 1–2 μM inhibited the closure rate of the scratch in A375.S2 cells. The berberine treated cells remained creviced on the scratched plate but the control (untreated cells) wounds healed after 24 h of treatment. The edge distance was significantly higher in the high dosage (2 μM) group after 24 h, compared to that observed at a low dose (1 μM) (Figure 2B).

After the A375.S2 cells were treated with berberine (1–2 μM) for 12 and 24 h, conditioned media were collected for determining the MMP-2 or MMP-9 activity by using gelatin zymography and the results are shown in Figure 3A. The results indicated that the berberine treatment at 1 μM concentration for 12 h and 2 μM for 24 h slightly inhibited the MMP-9 activity. The transwell chambers were coated with collagen for cell migration examination and coated with Matrigel for cell invasion examinations. The results are shown in Figure 3B,C. Figure 3B indicates that berberine (1.5–2 μM) significantly inhibited the migration of A375.S2 cells and Figure 3C indicates that berberine (1–2 μM) significantly inhibited the invasion of A375.S2 cells and that these effects are dose-dependent (Figure 3C).

The human melanoma A375.S2 cell line with a BRAFV600E mutation was obtained from the Food Industry Research and Development Institute (Hsinchu, Taiwan). The A375.S2 cells were cultured in the MEM medium supplemented with 10% FBS, 2 mM L-glutamine, 10 g/L non-essential amino acid, 100 μg/mL streptomycin, and 100 units/mL penicillin in a humidified atmosphere of 5% CO2 at 37 °C and at 70% confluence. The cells displayed a normal morphology as previously described [62,63].

Cell mobility characteristics were analyzed by a wound healing assay, as described previously [62,63]. Briefly, A375.S2 or A375.S2/PLX cells (2 × 105 cells/well) were placed in 12-well plates for 24 h and grown until reaching a confluent monolayer. The culture media were replaced with serum-free MEM to wash the cell monolayers. Cell monolayers were scratched (wound) using a sterile 200 μL-pipette tip and to remove the cell debris by PBS washing. A375.S2 or A375.S2/PLX were incubated with various concentrations of berberine (0, 1, 1.5, and 2 μM, or 0, 2, 4, 6 μM, respectively) for different time-periods (0, 12, and 24 h). The migrating cells in the denuded zone were monitored and photographed under phase contrast microscopy. The scratch experiments were done 3 times. We quantitated the relative wound size by using the Image J version 1.49o software. The inhibitory ability of migration is as follows: (% of control) = ((wound areaberberine 12 h or 24 h/wound areaberberine 0 h)/(wound areacontrol 12 h or 24 h/wound areacontrol 0 h)) × 100%, as described previously [65,66].

The A375.S2 cells (2 × 105 cells/well) were maintained in 12-well plates for 24 h and a serum-free MEM medium containing berberine (0, 1, 1.5, and 2 μM) was individually added to each plate and cultured for 12 and 24 h. The conditioned medium was collected and the total proteins from each treatment were quantitated to load them onto 10% polyacrylamide gels. They were then copolymerized with 0.2% gelatin and then the gel was incubated in a zymogen developing buffer (Sigma-Aldrich, St. Louis, Missouri, USA) containing 50 mM Tris (pH 7.5), 200 mM NaCl, 5 mM CaCl2, 1 μM ZnCl2, and 0.02% Brij-35. The gel was kept overnight at 37 °C and soaked twice in 2.5% Triton X-100 in dH2O at 25 °C for 30 min. The bands of MMP-2 and -9 corresponded to the activity, which was stained with 0.2% Coomassie blue in 10% acetic acid and 50% methanol. After staining, the gel was photographed and the band of gelatinolytic activity was determined using the NIH Image J software, version 1.47 (National Institutes of Health, Bethesda, MA, USA), as described previously [65,67].

Collagens and the Matrigel cell migration and invasion assay system were used to measure the migration and invasion of cell in vitro, as described previously [63,65]. For the cell migration assay, A375.S2 cells (5 × 104 cells/well) in serum-free MEM with berberine (0, 1, 1.5 and 2 μM) were placed in the upper chamber (8 μm pore size; Millipore, Temecula, CA, USA) and coated with 50 μL collagen in each transwell insert overnight, and 800 μL of MEM with 10% FBS was placed in the lower chamber and incubated for 24 h. After incubation, the cells adhering to the upper surface of the membrane were removed and all the migrated cells which adhered to the lower surface were fixed with 4% formaldehyde in PBS, treated with methanol, and stained with 2% crystal violet. After staining, all the samples were examined and photographed under light microscopy to count the total cells and calculate the percentage of inhibition based on the cells on each picture, as described previously [63,65]. The invasion assay was performed in almost the same way with a cell migration assay, except matrigel (matrigel:serum-free medium 1:10) was on the transwell membrane, as described previously [63,65].

The A375.S2 cells were placed in 10-cm culture dishes at a density of 1 × 106 cells/dish and they were incubated with berberine (0, 1, 1.5, and 2 μM) for 24 h. After treatment, the cells were harvested and re-suspended in a lysis buffer of 50 mM, Tris-HCl pH 7.5, 400 mM NaCl, 2 mM EGTA, 1 mM EDTA, 1 mM DTT, and a protease inhibitor cocktail (Roche, Mannheim, Germany). The cell lysates were centrifuged at 10,000× g at 4 °C for 10 min. We quantitated the total protein concentration of the supernatants by using a Bradford protein assay kit. A total of 30 μg of total proteins were separated by 12% SDS-polyacrylamide gel electrophoresis. They were then transferred onto a PVDF membrane (Millipore, Bedford, MA, USA). The membrane was blocked with 5% non-fat milk which was in the TBS-T buffer (10 mM Tris–HCl, 150 mM NaCl, and 0.05% Tween-20, pH 7.8) for 1 h at room temperature. The membranes were washed with the TBS-T buffer and were incubated with monoclonal antibodies such as anti-MMP-1, -MMP-2, -MMP-13, -TIMP-1, -E-cadherin, -N-cadherin, -RhoA, -ROCK1, -SOS-1, -GRB2, -Ras, -p-ERK1/2, p-c-Jung, -PKC, -p-FAK, -PI3K, -p-AKT, -NF-κB, and -uPA. After washing, the membranes were incubated with diluted corresponding HRP-conjugated secondary antibodies (diluted 1:5000; Santa Cruz Biotechnology), developed with ECL (Amersham, Piscataway, NJ), and they were detected directly with a Biospectrum Imaging System (UVP, Inc., Upland, CA, USA) [65,68].
After the PLX4032 treatment, the A375.S2 and PLX4032-resistant A375.S2 cells were harvested for examining the cell migration and invasion expression associated proteins such as p-ERK1/2, MEK1, Ras, and RhoA, as described in the western blotting section.

The results are presented as mean ± SD. The data were statistically analyzed with one-way ANOVA analysis of variance. * p < 0.05, ** p < 0.01, *** p < 0.001 are determined as significant between the control and berberine treated groups.

This work supported by the grant CMUBH R106-002 from China Medical University Beigang Hospital, Yunlin, Taiwan. This work was supported by the Ministry of Science and Technology, Taipei, Taiwan (grant numbers: 105-2815-C-039-082-B).

The authors have declared that no competing interests exist. 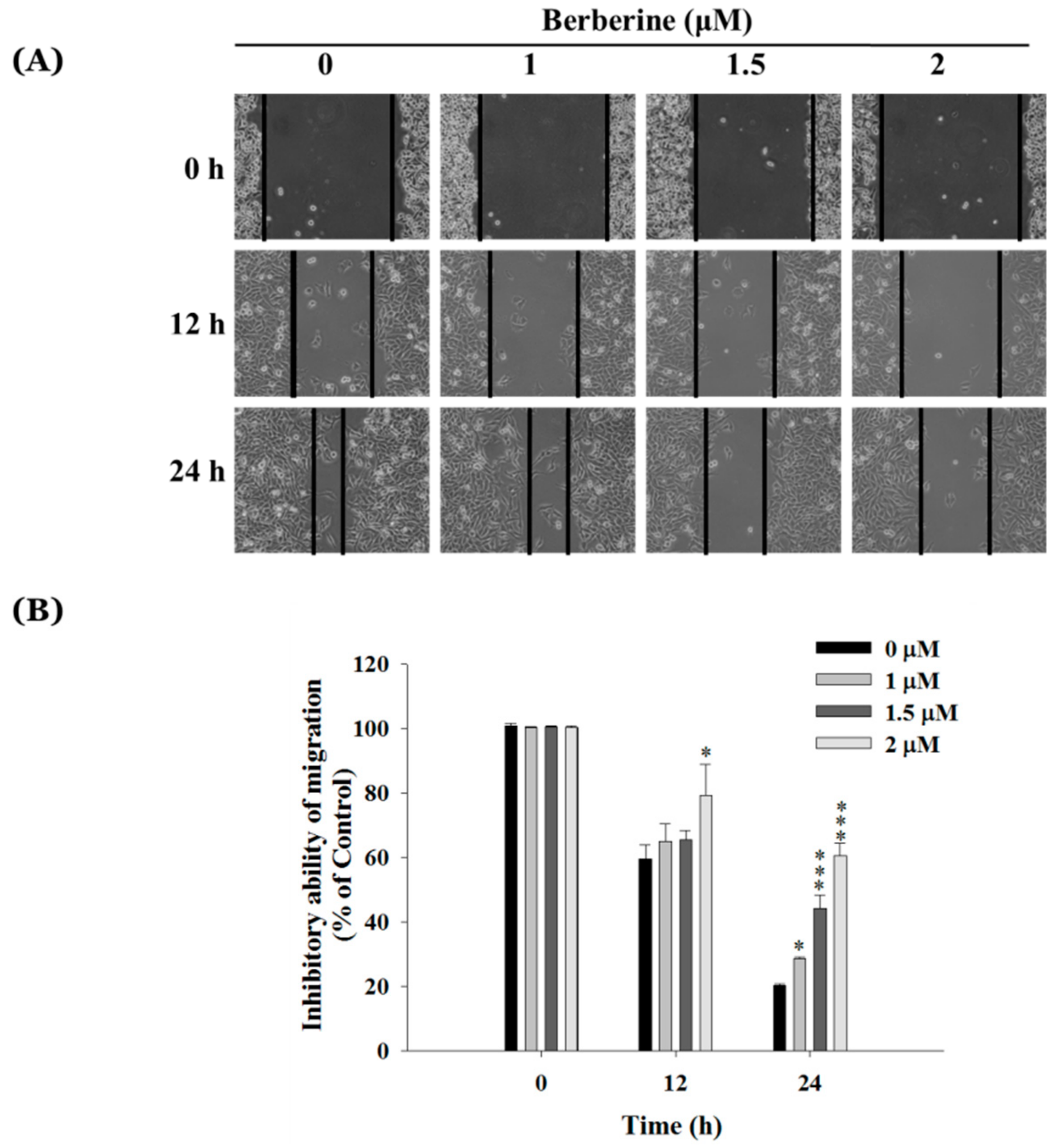 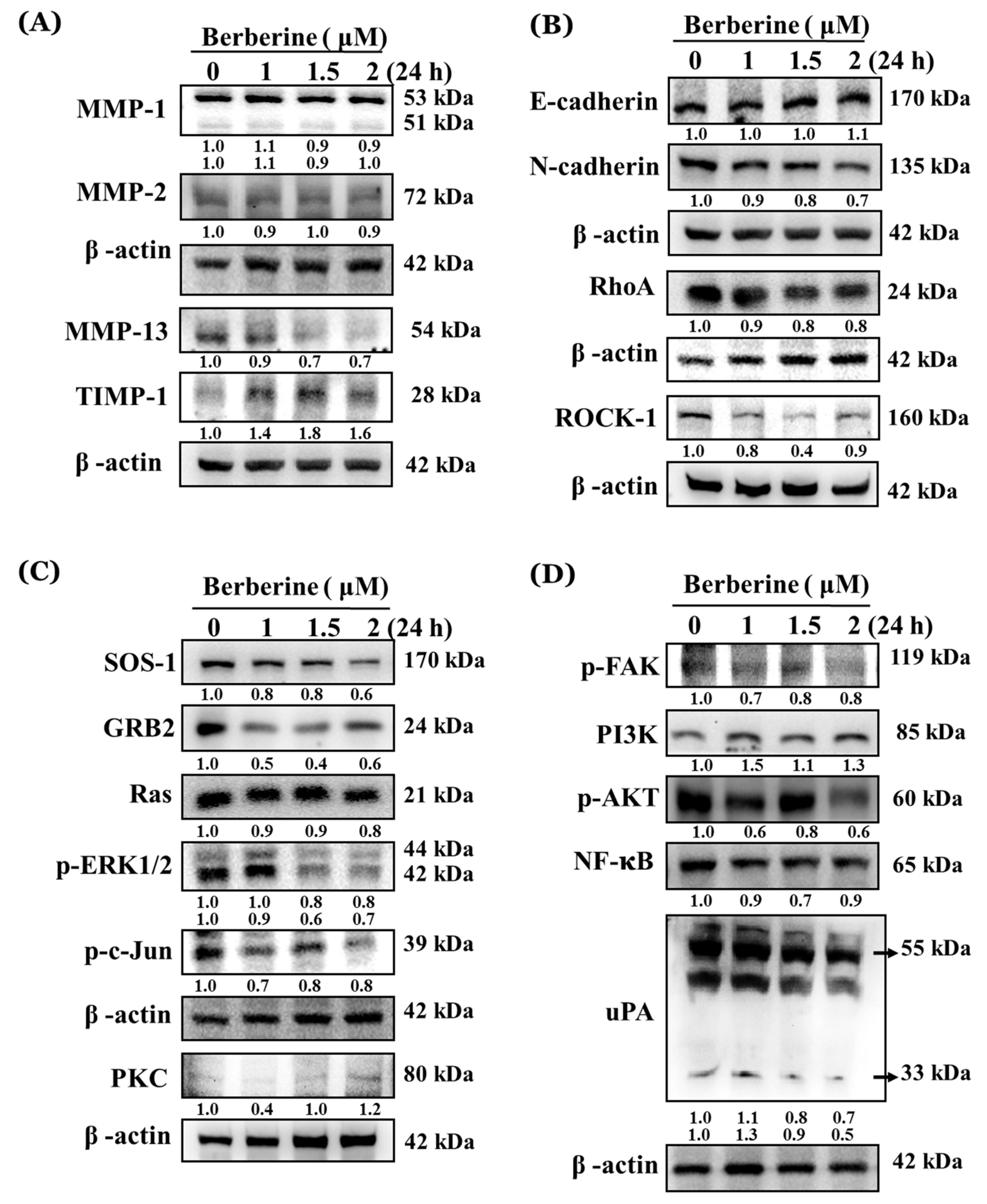 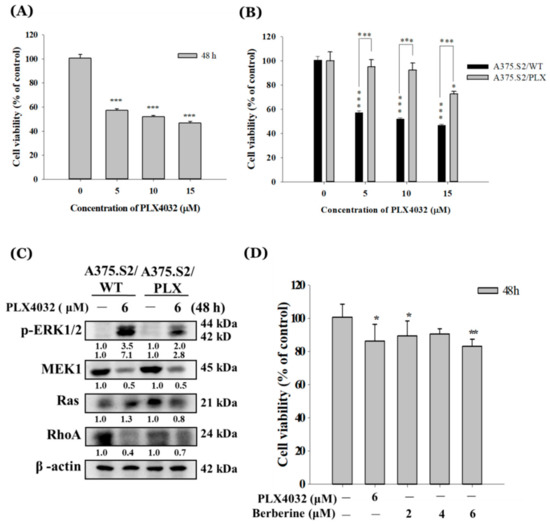 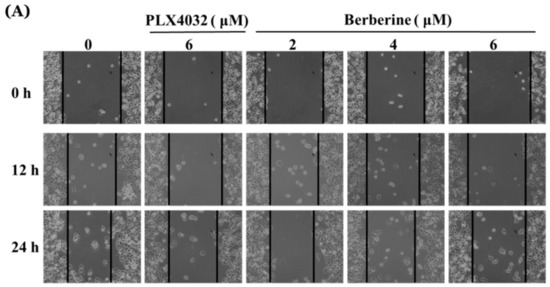 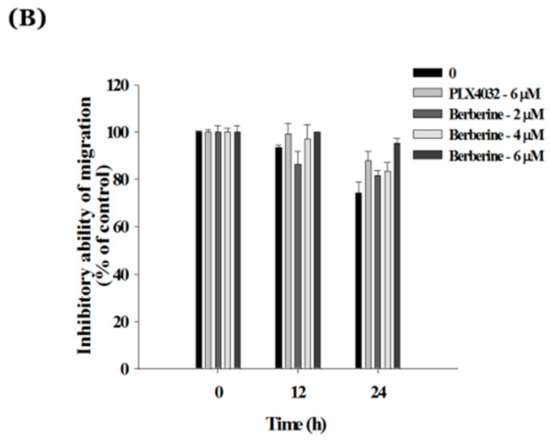 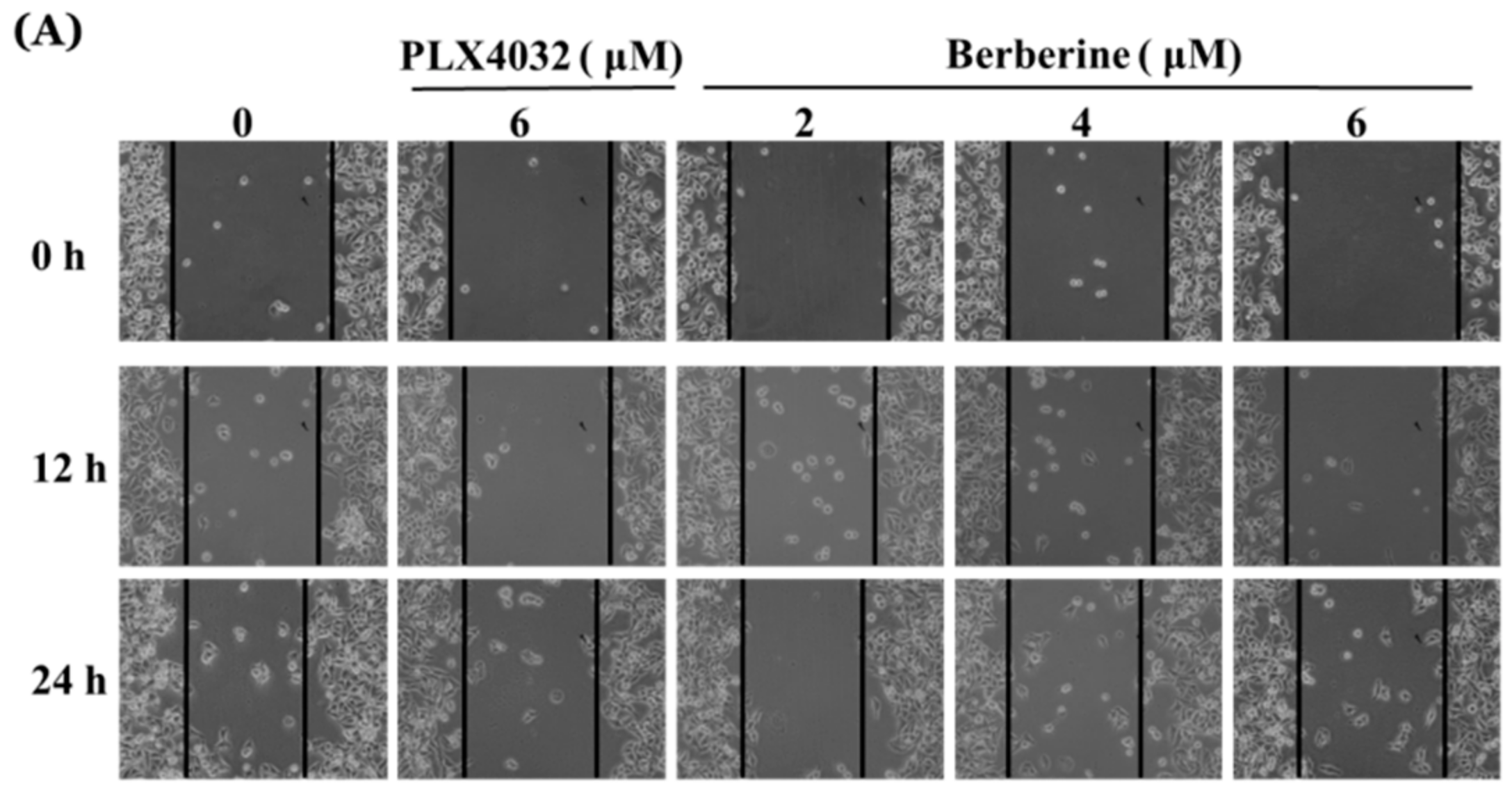