Tea is one of the most consumed beverages in the world. Green tea, black tea, and oolong tea are made from the same plant Camellia sinensis (L.) O. Kuntze. Among them, green tea has been the most extensively studied for beneficial effects on diseases including cancer, obesity, diabetes, and inflammatory and neurodegenerative diseases. Several human observational and intervention studies have found beneficial effects of tea consumption on neurodegenerative impairment, such as cognitive dysfunction and memory loss. These studies supported the basis of tea’s preventive effects of Parkinson’s disease, but few studies have revealed such effects on Alzheimer’s disease. In contrast, several human studies have not reported these favorable effects with regard to tea. This discrepancy may be due to incomplete adjustment of confounding factors, including the method of quantifying consumption, beverage temperature, cigarette smoking, alcohol consumption, and differences in genetic and environmental factors, such as race, sex, age, and lifestyle. Thus, more rigorous human studies are required to understand the neuroprotective effect of tea. A number of laboratory experiments demonstrated the benefits of green tea and green tea catechins (GTCs), such as epigallocatechin gallate (EGCG), and proposed action mechanisms. The targets of GTCs include the abnormal accumulation of fibrous proteins, such as Aβ and α-synuclein, inflammation, elevated expression of pro-apoptotic proteins, and oxidative stress, which are associated with neuronal cell dysfunction and death in the cerebral cortex. Computational molecular docking analysis revealed how EGCG can prevent the accumulation of fibrous proteins. These findings suggest that GTCs have the potential to be used in the prevention and treatment of neurodegenerative diseases and could be useful for the development of new drugs. View Full-Text
Keywords: green tea; catechin; EGCG; brain; cognitive function; Alzheimer’s disease; Parkinson’s disease; neuroprotection; epidemiology; inflammation green tea; catechin; EGCG; brain; cognitive function; Alzheimer’s disease; Parkinson’s disease; neuroprotection; epidemiology; inflammation
►▼ Show Figures 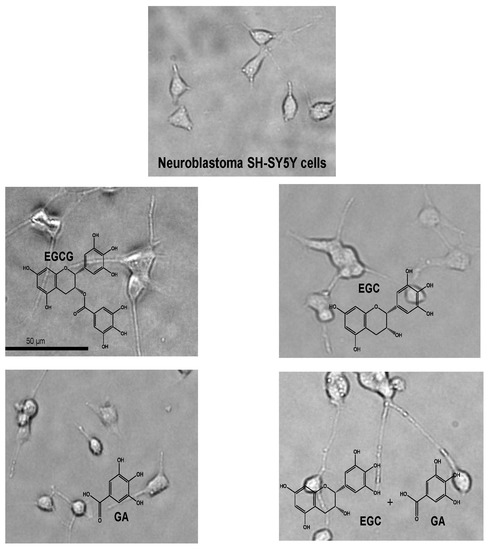