A Review on the Weight-Loss Effects of Oxidized Tea Polyphenols

Green tea has been shown to have beneficial effects on many diseases such as cancer, obesity, inflammatory diseases, and neurodegenerative disorders. The major green tea component, epigallocatechin-3-O-gallate (EGCG), has been demonstrated to contribute to these effects through its anti-oxidative and pro-oxidative properties. Furthermore, several lines of evidence have indicated that the binding affinity of EGCG to specific proteins may explain its mechanism of action. This review article aims to reveal how EGCG-protein interactions can explain the mechanism by which green tea/EGCG can exhibit health beneficial effects. We conducted a literature search, using mainly the PubMed database. The results showed that several methods such as dot assays, affinity gel chromatography, surface plasmon resonance, computational docking analyses, and X-ray crystallography have been used for this purpose. These studies have provided evidence to show how EGCG can fit or occupy the position in or near functional sites and induce a conformational change, including a quaternary conformational change in some cases. Active site blocking, steric hindrance by binding of EGCG near an active site or induced conformational change appeared to cause inhibition of enzymatic activity and other biological activities of proteins, which are related to EGCG’s biological oligomer and formation of their toxic aggregates, leading to the prevention of neurodegenerative diseases and amyloidosis. In conclusion, these studies have provided useful information on the action of green tea/catechins and would lead to future studies that will provide further evidence for rational EGCG therapy and use EGCG as a lead compound for drug design. View Full-Text
Keywords: catechin; EGCG; affinity chromatography; binding interaction; health benefits; protein; green tea; molecular docking; cancer; epidemiology catechin; EGCG; affinity chromatography; binding interaction; health benefits; protein; green tea; molecular docking; cancer; epidemiology
►▼ Show Figures 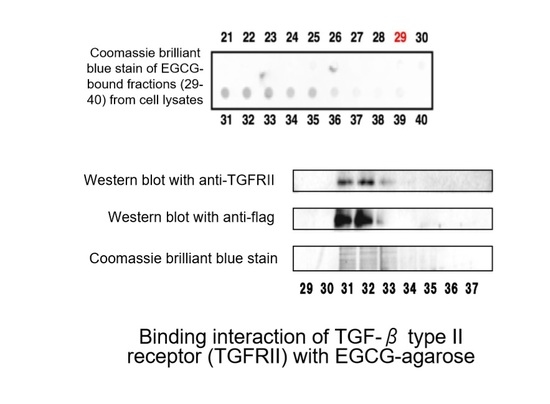