We introduce here a tool, the Differential ATAC-seq toolkit (DAStk), developed with simplicity and ease of implementation in mind, focused around inferring changes in TF activity from ATAC-seq data. Using nascent transcription data, we had previously developed the motif displacement score (MD-score), a metric that assesses TF-associated transcriptional activity. As such, the MD-score reflects the enrichment of a TF sequence motif within a small radius (150 bp) of enhancer RNA (eRNA) origins relative to a larger local window (1500 bp) [58]. While ATAC-seq does not directly provide information on eRNAs, most sites of eRNA activity reside within open chromatin [59]. Therefore, we utilize the midpoint of detected ATAC-seq peaks (rather than the eRNA origin) as a frame of reference for calculating MD-scores. Then, given two distinct biological conditions, we compare the ratio of MD-scores across the conditions and identify statistically significant changes by a two-proportion Z-test. Using public ATAC-seq data from a variety of human and mouse cell lines (IMR90, H524, NJH29, and BRG1fl/fl) and perturbations (nutlin, doxycycline, and tamoxifen), we assessed changes in accessibility over all putative TF sequence recognition motifs (for all motifs within the HOCOMOCO database[38]).
Given our familiarity with TP53 activation [55,60], we first examined this approach on ATAC-seq data gathered before and 6 h after Nutlin-3a exposure on IMR90 cells [61]. Nutlin-3a is an exquisitely specific activator of TP53. As expected, we found that TP53 displayed the most significant change (p-value ) in MD-score (Figure 1a, in red) of all motifs within the HOCOMOCO database [38]. Relaxing the p-value cutoff (p-value ), we subsequently identified altered activity in TP63 and TP73 (Figure 1a, in maroon), likely reflecting the fact that these two proteins have nearly identical sequence recognition motifs to TP53.
Interestingly, Nutlin-3a has also been analyzed using nascent transcription data albeit in a different cell line (HCT116) at a shorter time point (1 h) [55]. The MD-score analysis of the nascent data [58] obtained very similar results (Figure 1b). Unfortunately, a direct comparison of individual genomic loci between the two data sets is not feasible because different cell lines and drug exposure times are used. However, a couple of interesting observations concerning the overall MD-score trends are nonetheless noteworthy. First, the co-localization of the TP53 motif with ATAC-peak midpoints is far less striking than the co-localization of motifs with the eRNA origins (observed in the heatmap histograms). This observation, combined with the relative lower magnitude of MD-scores (y-axis), suggests that the eRNA origin (obtained in nascent transcription) is a far more precise method of localizing and detecting changes in TF activity. Second, despite this lack of precision, ATAC-seq correctly identifies TP53 as the most dramatically altered MD-score, whereas the best scoring motif with nascent transcription is TP63. Why this discrepancy exists is unclear, but given the relative similarity of these two TF motifs it may simply be coincidental.
We next analyzed differential ATAC-data gathered by Denny et al. to examine whether Nfib promotes metastasis via increasing chromatin accessibility. For this question, they examined two human small cell lung carcinoma (SCLC) cell lines (H524 and NJH29), profiling by ATAC-seq before and four hours after doxycycline treatment. Using the MD-score approach, we detected changes in TF activity for multiple members of the NFI family (Figure 2a,b). An increase in NFIA (two different motifs) and NFIC was detected in both cell types (p-value for H524s; p-value for NJH29s). As further confirmation of the NFI signal, we tested one of their mouse samples (KP22 cells) and found an increase of NFIA (p-value ), consistent with the human results. We next investigated as to whether our results were sensitive to the particular peaks utilized. To this end, we sub-sampled peaks from the NJH29 data and re-ran our analysis. Both NFIA and NFIC are detectable as significant (p-value ) even when using only half of the ATAC-seq peaks, suggesting the signal is reasonably robust.
We then sought to determine how the MD-score approach compared to the BagFoot [36] approach at identifying differential TF activity. BagFoot also identified NIFA and NIFC within the SCLC differential ATAC-seq data [36]. However, they additionally claimed HNF6 as potentially altered in the SCLC data. Importantly, Baek et. al. noted that the HNF6 result did not hold when their approach utilized bias corrected data (based on naked DNA digested with Tn5). The fact that our MD-score approach does not identify HNF6 as altered further supports the idea that this result reflects a data artifact rather than a true biological phenomena. Interestingly, the MD-score approach and Bagfoot obtained nearly identical results on a second differential ATAC-seq dataset. In this case, King and Klose [62] showed BRG1, essential for pluripotency-related chromatin modifications, is required to make chromatin accessible at OCT4 target sites. To this end, they treated BRG1fl/fl mouse embryonic stem cells (ESCs) with tamoxifen for 72 h to ablate BRG1 expression. When compared to the unperturbed mouse ESC control, we observed lowered MD-scores for SOX2, POU5F1 (Oct4), and NANOG in the BRG1-depleted cells (p-value ; Figure 3a), directly confirming the BagFoot findings.
Finally, we examined a differential ATAC-seq dataset obtained for decidualized and undecidualized human endometrium cells [63]. Spontaneous decidualization occurs in response to progesterone signaling (i.e., by an implanted embryo at the early stages of pregnancy). Using our MD-score approach, we found the CEBP family of transcription factors had increased activity in decidualized cells, consistent with the author’s conclusion (Figure 3b). Additionally, we found significantly lowered MD-scores for the KLF16 motif (a TF known to be involved in regulatory uterine cell biology [64]) and TFDP1 (a known target to the estrogen receptor present in all endometrial cell types [65] of lower activity during the secretory phase, in concert with the decidualization process). In all cases, the magnitude of MD-score alterations were relatively small, and yet the transcription factors uncovered can be linked to the underlying decidualization process.

We sought to identify changes in TF activity across differential ATAC-seq datasets, as this protocol is inexpensive, is simple, and requires relatively small cell counts. Here, we demonstrate two important results. First, using a simple statistic (the motif displacement score) as a co-localization measure of ATAC-seq peak midpoints to TF sequence motif sites across the genome, we correctly detect changes in TF activity. Second, our approach independently confirms the results obtained by BagFoot [36], as the two analysis techniques are distinct in their approach to quantifying differences in chromatin accessibility across conditions. Arguably, regardless of which analysis technique is preferred, differential ATAC-seq is a relatively simple and inexpensive way to assess changes in TF activity induced by perturbations.
We believe there are two distinct advantages to the MD-score approach to assessing TF activity. First, the MD-score is calculated relative to a local background window. Consequently, it cleanly accounts for the localized sequence bias observed at promoters and enhancers [58], which likely reduces false positives. Second, the statistic is relatively simple to implement and naturally accommodates multiprocessing for faster computations. DAStk can easily be incorporated at the tail-end of a traditional processing pipeline for ATAC-seq data, in that MD-scores are calculated directly from called peaks and genomic sequence.
Our MD-score statistic was originally developed for analysis of nascent transcription data [58] and focused on enhancer RNA co-localization with motifs. Given most eRNAs originate from areas of open chromatin [21,57,66] and many transcription factors can alter chromatin accessibility [42], it is perhaps unsurprising that differential chromatin accessibility can be used to infer changes in TF activity. However, it remains unclear whether the observed alterations of chromatin reflect a distinct functional activity of transcription factors or are simply a side effect of DNA binding and/or altering transcription. While a careful examination of the two Nutlin-3a datasets (Figure 1) yields the identification of several genomic regions that are uniquely altered in only one of the two datasets (ATAC-seq or nascent), the lack of matched data makes interpretation of these differences difficult. Do they reflect differences of cell type or distinct functional activities of TP53? A careful comparison of chromatin accessibility and nascent transcription data in the context of a perturbation will be necessary to fully address this question.

The Differential ATAC-seq toolkit (DAStk) is a collection of scripts publicly available at https://biof-git.colorado.edu/dowelllab/DAStk for download. We used 641 PWMs of human motifs in the HOCOMOCO [38] database (to verify the presence of ATAC-seq peaks nearby) and 427 mouse motifs. TF sequence motifs were mapped to the hg19 or mm10 reference genomes with a p-value cutoff of . For each motif, the number of ATAC-seq peaks was accounted for, within a large (1500 bp radius) and small (150 bp radius) window, to calculate the motif displacement score. The difference between the MD-score in each condition and the number of ATAC-seq peaks nearby (large window) each motif was used to produce the MA plots. Those motifs with a statistically significant difference in MD-score were labeled as determined by a z-test of two proportions [58]. 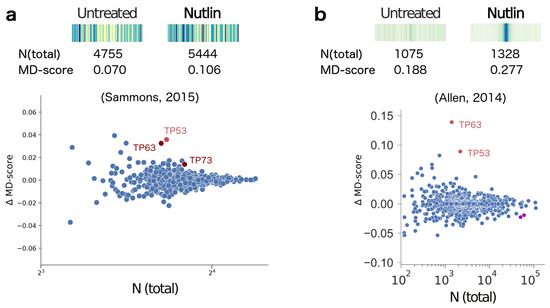