Synthesis of Theaflavins and Their Functions

The Stability of Medicinal Plant microRNAs in the Herb Preparation Process

Herbal medicine is now globally accepted as a valid alternative system of pharmaceutical therapies. Various studies around the world have been initiated to develop scientific evidence-based herbal therapies. Recently, the therapeutic potential of medicinal plant derived miRNAs has attracted great attraction. MicroRNAs have been indicated as new bioactive ingredients in medicinal plants. However, the stability of miRNAs during the herbal preparation process and their bioavailability in humans remain unclear. Viscum album L. (European mistletoe) has been widely used in folk medicine for the treatment of cancer and cardiovascular diseases. Our previous study has indicated the therapeutic potential of mistletoe miRNAs by using bioinformatics tools. To evaluate the stability of these miRNAs, various mistletoe extracts that mimic the clinical medicinal use as well as traditional folk medicinal use were prepared. The mistletoe miRNAs including miR166a-3p, miR159a, miR831-5p, val-miR218 and val-miR11 were quantified by stem-loop qRT-PCR. As a result, miRNAs were detectable in the majority of the extracts, indicating that consumption of medicinal plant preparations might introduce miRNAs into mammals. The factors that might cause miRNA degradation include ultrasonic treatment, extreme heat, especially RNase treatment, while to be associated with plant molecules (e.g., proteins, exosomes) might be an efficient way to protect miRNAs against degradation. Our study confirmed the stability of plant derived miRNAs during herb preparations, suggesting the possibility of functionally intact medicinal plant miRNAs in mammals. View Full-Text
Keywords: microRNAs; medicinal plants; stability; herb preparations; Viscum album L.; mistletoe microRNAs; medicinal plants; stability; herb preparations; Viscum album L.; mistletoe
►▼ Show Figures 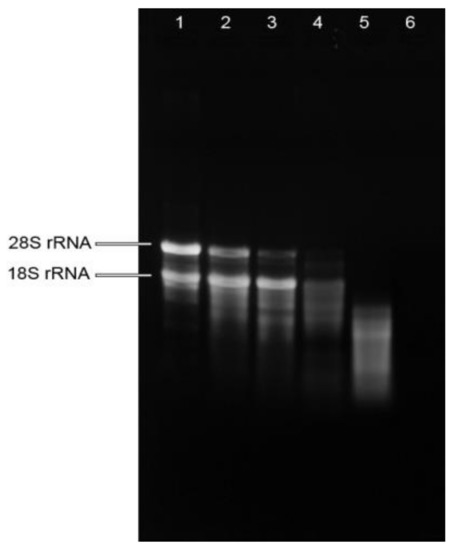