Neurodegenerative diseases affect millions of human lives all over the world. The number of afflicted patients is rapidly growing, and disease-modifying agents are urgently needed. Caffeic acid, an important member of the hydroxycinnamic acid family of polyphenols, has considerable neurotrophic effects. We have previously shown how caffeate alkyl ester derivatives significantly promote survival and differentiation in neuronal cells. In this study, the mechanisms by which these ester derivatives exert their neurotrophic effects are examined. A series of eight caffeic acid esters with different alkyl chain lengths, ranging from methyl (CAF1) to dodecyl esters (CAF8), were synthesized and studied for their influence on neurotrophic signaling pathways. Caffeate esters did not induce tropomyosin-receptor kinase A (TrkA) phosphorylation, which was assessed by immunoblotting up to a concentration of 25 µM. NIH/3T3 cells overexpressing TrkA were generated to further examine phosphorylation of this receptor tyrosine kinase. None of the esters induced TrkA phosphorylation in these cells either. Assessment of the effect of caffeate derivatives on downstream neurotrophic pathways by immunoblotting showed that the most potent esters, decyl caffeate (CAF7) and dodecyl caffeate (CAF8) caused extracellular signal-regulated kinase (ERK1/2) and Akt serine threonine kinase phosphorylation in PC12 cells at 5 and 25 µM concentrations. In conclusion, this study shows that caffeate esters exert their neurotrophic action by modulation of ERK1/2 and Akt signaling pathways in neuronal cells, and further demonstrates the potential therapeutic implications of these derivatives for neurodegenerative diseases. View Full-Text
Keywords: hydroxycinnamic acids; neurodegenerative diseases; neurotrophic factors; polyphenols hydroxycinnamic acids; neurodegenerative diseases; neurotrophic factors; polyphenols
►▼ Show Figures 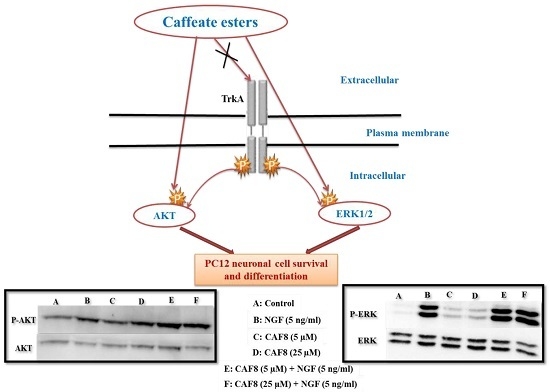