Cells frequently simultaneously express RNAs and cognate antisense transcripts without necessarily leading to the formation of RNA duplexes. Here, we present a novel transcriptome-wide experimental approach to ascertain the presence of accessible double-stranded RNA structures based on sequencing of RNA fragments longer than 18 nucleotides that were not degraded by single-strand cutting nucleases. We applied this approach to four different cell lines with respect to three different treatments (native cell lysate, removal of proteins, and removal of ribosomal RNA and proteins). We found that long accessible RNA duplexes were largely absent in native cell lysates, while the number of RNA duplexes was dramatically higher when proteins were removed. The majority of RNA duplexes involved ribosomal transcripts. The duplex formation between different non-ribosomal transcripts appears to be largely of a stochastic nature. These results suggest that cells are—via RNA-binding proteins—mostly devoid of long RNA duplexes, leading to low “noise” in the molecular patterns that are utilized by the innate immune system. These findings have implications for the design of RNA interference (RNAi)-based therapeutics by imposing structural constraints on designed RNA complexes that are intended to have specific properties with respect to Dicer cleavage and target gene downregulation. View Full-Text
Keywords: RNA–RNA; interaction; RNA-binding; RNA-binding protein (RBP); ribosomal RNA (rRNA); Dicer; helix RNA–RNA; interaction; RNA-binding; RNA-binding protein (RBP); ribosomal RNA (rRNA); Dicer; helix
►▼ Show Figures 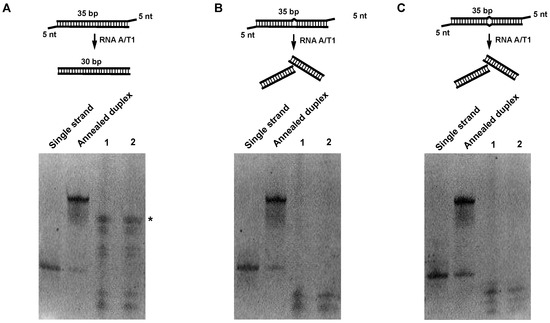