Graphene combined with fractal structures would probably be a promising candidate design of an antenna for a wireless communication system. However, the thermal transport properties of fractal graphene, which would influence the properties of wireless communication systems, are unclear. In this paper, the thermal transport properties of graphene with a Sierpinski fractal structure were investigated via the reverse non-equilibrium molecular dynamics simulation method. Simulation results indicated that the thermal conductivity of graphene with fractal defects decreased from 157.62 to 19.60 (W m−1 K−1) as the fractal level increased. Furthermore, visual display and statistical results of fractal graphene atomic heat flux revealed that with fractal levels increasing, the real heat flux paths twisted, and the angle distributions of atomic heat flux vectors enlarged from about (−30°, 30°) to about (−45°, 45°). In fact, the fractal structures decreased the real heat flow areas and extended the real heat flux paths, and enhanced the phonon scattering in the defect edges of the fractal graphene. Analyses of fractal graphene thermal transport characters in our work indicated that the heat transfer properties of fractal graphene dropped greatly as fractal levels increased, which would provide effective guidance to the design of antennae based on fractal graphene.
Keywords: molecular dynamics; graphene; fractal defects; thermal conductivity molecular dynamics; graphene; fractal defects; thermal conductivity

The antenna is the fundamental component of transmitting and receiving radio waves in wireless communication systems, which restricts the performance and size of the wireless communication system. In order to minimize the size of the antenna and make effective use of valuable spectrum resources, it is appropriate to find better antenna materials and antenna structures in comparison to traditional microstrip antennae based on Euclidean geometry. Graphene has a unique two-dimensional planar structure, i.e., tunable thermal and electric conductivity [1], which provides many potential engineering applications in the realm of wireless communication systems, including high-performance antennae [2,3,4,5,6]. Additionally, the surface impedance of graphene can be adjusted macroscopically by applying bias voltage [3,4,5]. Moreover, the high electrical resistance of graphene in terahertz band can inhibit the radiation side lobe of the antenna, which enables the graphene antenna to achieve directional radiation and improve the gain [3].
Fractal geometry [7], whose perimeter becomes larger and larger, while the area becomes smaller and smaller with fractal level increasing, can be applicable to the design of an antenna structure [8]. Compared to traditional microstrip antennae, because of its unique self-similarity geometry, the fractal antenna has two obvious advantages. Firstly, the multifrequency performance of the electrical parameters can be obtained. Secondly, the space filling of the fractal structure makes it possible to reduce the size of some antennae [9]. Therefore, fractal graphene may be an effective technical approach for high-performance multiband antennae with a small size. Notably, the excessive power and overheating of an electronic device will affect its service performance and lifetime. When the heat inside a high-power device cannot be released in time, the heat inside the device will cause heat accumulation and deteriorate the reliability of the device [10]. Therefore, an antenna should take thermal transport into account to increase the reliability of the communication system. That is, it is necessary to study the thermal transportation properties of fractal graphene. Many advances in the fields of nanoelectronics and thermal management [11,12] have been achieved ever since the pioneering work of Novoselov et al. [13]. The thermal conductivity of the graphene monolayer can be up to 5300 W·m−1·K−1 [3,11,14,15] at room temperature. Because of the strong covalent bond between carbon and carbon, graphene conducts heat through lattice vibration, i.e., phonon. Molecular dynamics (MD) is an appropriate method to study phonon vibration, which dominates the thermal transport of graphene. The thermal features of graphene sheets have been regulated through chemical doping [16] and physical tailoring [17]. However, graphene sheets with fractal defects have seldom been studied [18,19,20].
In this work, graphene with Sierpinski carpet fractal models with different fractal levels are established, and their thermal conductivity and interfacial thermal resistances are calculated using the reverse nonequilibrium molecular dynamics method (RNEMD) method [21]. Furthermore, the microheat flux on each atom of these fractal graphene sheets is calculated and compared with perfect graphene to verify the microscopic thermal transportation mechanism.

The Sierpinski fractal structure is one of self-similar sets. Generally, a self-similar set is fabricated by the technique of subdividing a shape into smaller copies of itself, removing one or more copies, and continuing recursively, which can be extended to other shapes. Additionally, the construction of the Sierpinski carpet begins with a square. The generation process of the Sierpinski fractal structure is as follows: Firstly, a square is cut into 9 congruent subsquares in a 3-by-3 grid, and the central subsquare is removed. The fractal level 1 pattern is shown in Figure 1a. The same procedure is then applied continuously twice to the remaining 8 subsquares. The self-similar fractal dimension D of the fractal structure is calculated by: where a is the number of side lengths divided equally and b is the ratio of the remaining area of removing the central square to the area of the square after the nth order. The self-similar fractal dimension of the fractal structure constructed in this paper is of 1.89, according to Equation (1).

In this paper, graphene models with different fractal levels of 1, 2, and 3, and perfect graphene (gra0) have been established and studied. The chirality and size of each model are exactly the same. The chirality is Ziazag, and the side length is 21 nm. The thermal properties of graphene with different fractal levels were simulated using the RNEMD method [21]. As shown in Figure 1, in this work, the heat flux was imposed along the x direction to generate a temperature gradient through the Nosé–Hoover thermal bath [22,23]. The interaction between two carbon atoms was described by the adaptive intermolecular reactive empirical bond-order (AIREBO) potential [24], which has been widely used to study the thermal and mechanical properties of graphene nanomaterials [18,25]. The simulating time step was set to be of 0.5 fs. Both the in-plane and out-plane directions were used for the periodic boundary condition. The dimension of the out-plane simulation box was set to be from –1 nm to 1 nm. Additionally, the monolayer graphene was placed in the origin position of the out-of-plane direction to avoid interaction between replicas of the monolayer graphene. Molecular dynamics were conducted using the large-scale atomic/molecular massively parallel simulator (LAMMPS) [26]. Firstly, the energy of the system was minimized using the conjugate gradient method [27]. Then, simulations were carried out in a NVT (constant atom number, volume, and temperature) ensemble at 300 K after 200 ps, which was long enough to reach an initial equilibrium for the system. The system was later switched to a NVE (constant atom number, volume, and energy) ensemble for 4 ns, of which 1 ns was to obtain a nonequilibrium steady state and then, 3 ns was used to produce an average temperature profile. The thermal conductivity of the graphene with fractal defects was calculated using RNEMD. The entire structural models were divided into 50 slabs along the x direction, where the 1st slab and the 50th slab were cold regions, and the 26th was a hot region. The hottest atom in the cold region periodically swaps its energy with the coldest atom in the hot region in order to achieve a temperature gradient. Here, the heat flux Jx can be calculated by:
Jx is heat flux; Nswap is the pair number of the atoms involved in exchange of kinetic energy in the simulation process; tswap means the total time of exchanging atomic energy in the whole simulation process; and vs and vh are the velocity of the hottest atoms in the heat sink region and the coldest atoms in the heat source region, respectively. The energy was exchanged every 100 steps and the heat flow from the heat source to the heat sink reached a steady state after 1.0 ns. Then, a stable temperature gradient appeared in the model. The temperature for each slab was computed from:
Ti is the temperature of the ith slab, is the number of atoms contained in the ith slab, kB is the Boltzmann constant, and is the momentum of the j atom.
During energy exchange, the linear response of the temperature variation happens beyond the defective area, where it means interfacial thermal resistance appears. The temperature differences at jumping points, ∆T, as shown in Figure 2 and Figure 3, can be obtained by linearly fitting the temperature variation in each slab. In addition, the temperature distribution is linear in the central region between the heat source and heat sink, which is consistent with the temperature distribution obtained by Fourier’s heat conduction law. The thermal conductivity κ can be calculated by the following formula: where A represents the cross-sectional area through the heat flux, which can be described by the width of the model to multiply the thickness of the graphene sheet. We took the thickness of the graphene sheet as 0.142 nm, the carbon–carbon bond length, which was widely adopted to calculate the thermal conductivity of graphene sheet and nanotube [18].
The interfacial thermal resistance, also known as the Kapitza resistance, has been defined as the ratio of the temperature difference and the heat flux across the interface: where ∆T represents the temperature difference and J is constant heat flux.

In this paper, we investigated the thermal transport in length 21 nm × width 21 nm graphene with fractal defects in different levels, gra0, gra1, gra2, and gra3, using the RNEMD method. For gra0, its thermal conductivity is consistent with previous nanoribbon research [18]. For others, their thermal conductivity decreases with the increase of fractal level, and their interfacial thermal resistances are triggered and increase. By calculating and analyzing the atomic heat flux vector, as the fractal level increases, we identified that the reduction of thermal conductivity in graphene with fractal defects was mainly attributed to the elongation of the real heat flux path, the overestimation of the real heat flux area, and phonon scattering at the edge of vacancy, as previous research [18]. However, it is hard to find the quantitative relationship between the elongation of the real heat flux path and the overestimation of the real heat flux area on fractal graphene, for regular and complex edges of fractal geometry. Thus, we made qualitative analyses and a microscopic thermal transportation mechanism of fractal graphene in this work. When fractal defects increase, the edges and boundaries of defects will have a bigger and bigger effect on thermal conductivity, where more and more thermal carriers were trapped and energy accumulated. Meanwhile, the results showed that interfacial thermal resistance increases with the increase of the fractal level. Therefore, by controlling the level of the fractal defect, the thermal properties and communicating capacity of fractal defective graphene have a tradeoff for antennae, which ensures that the fractal graphene antenna could be widely applied to the wireless communication system. 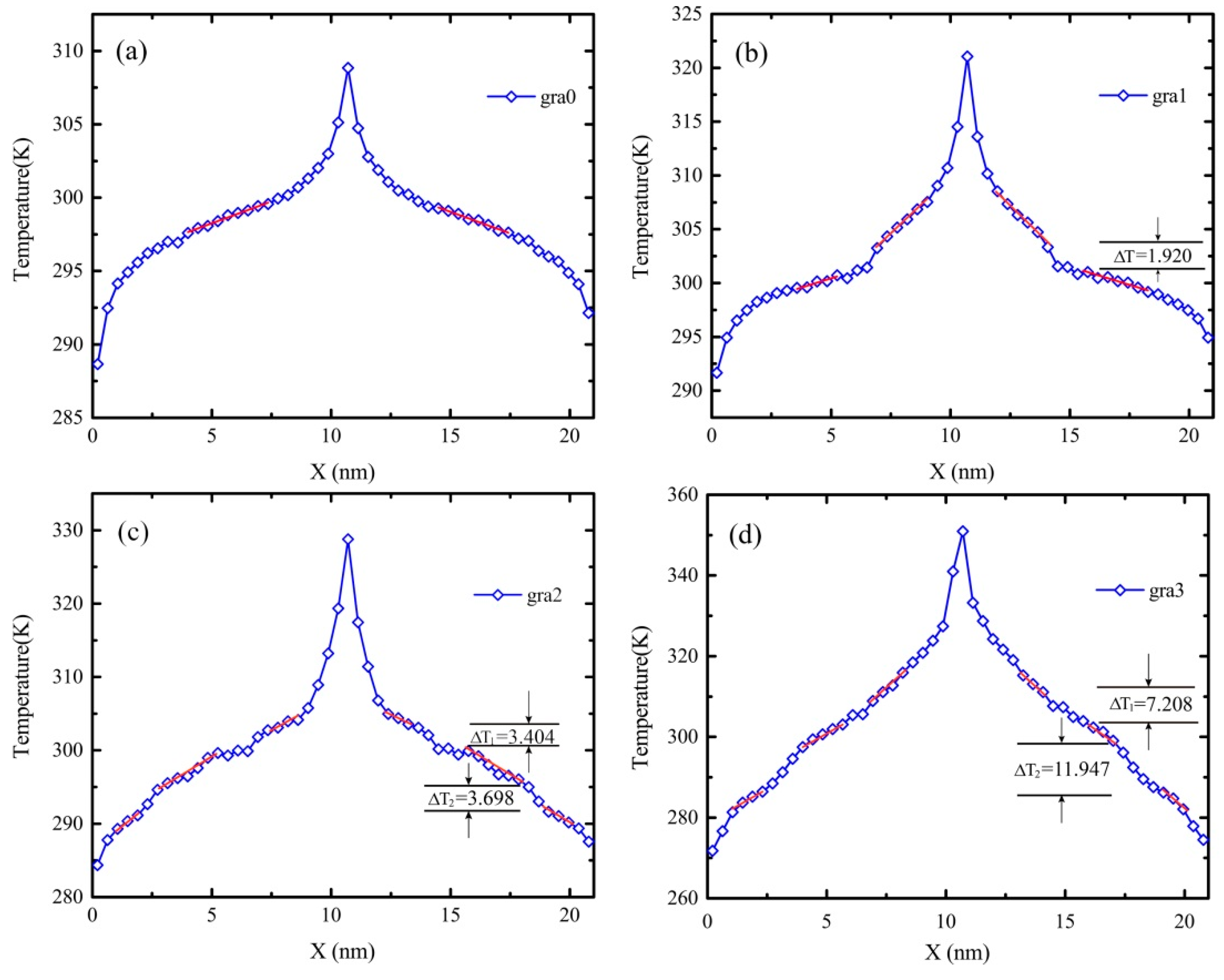 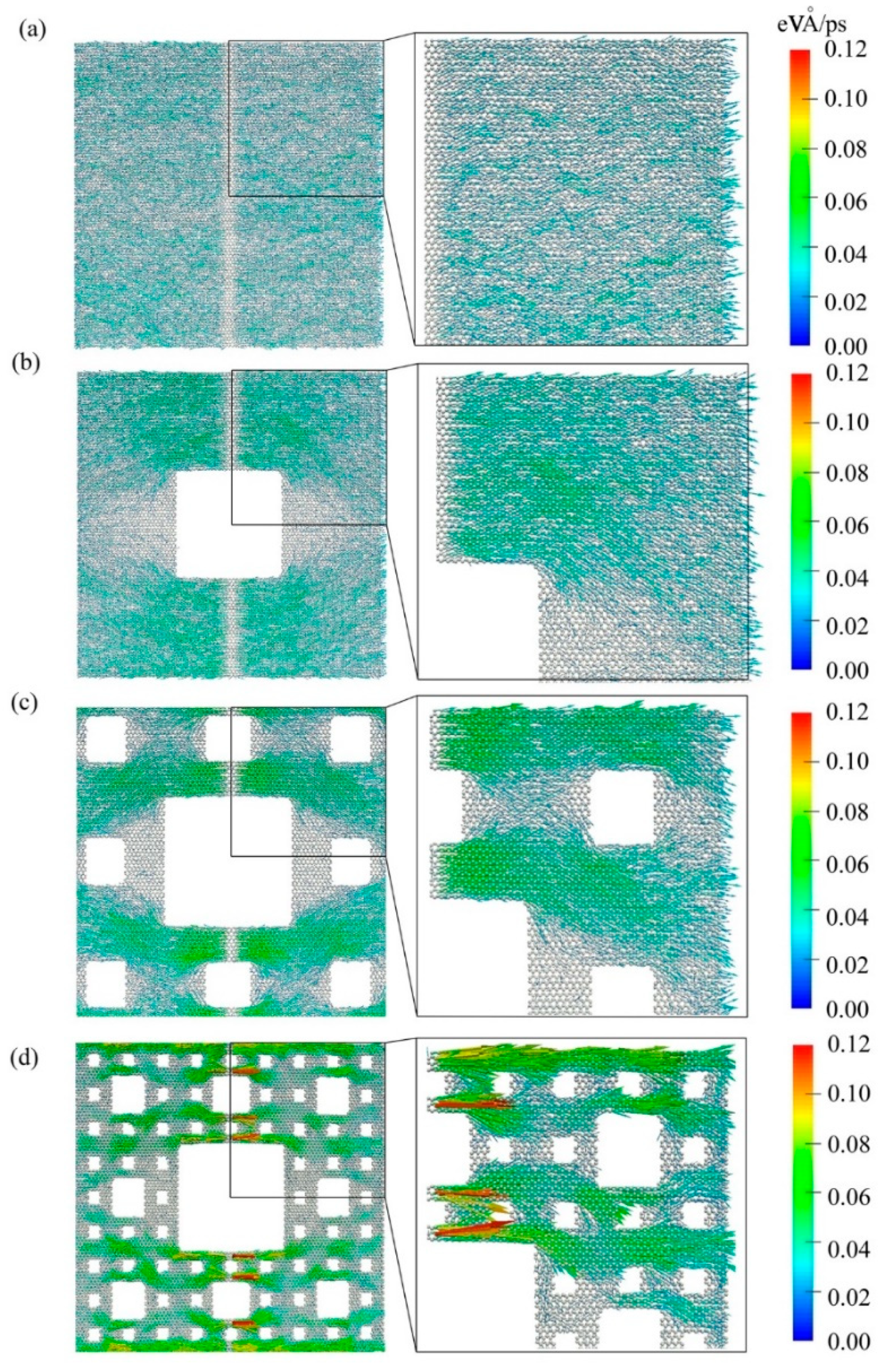 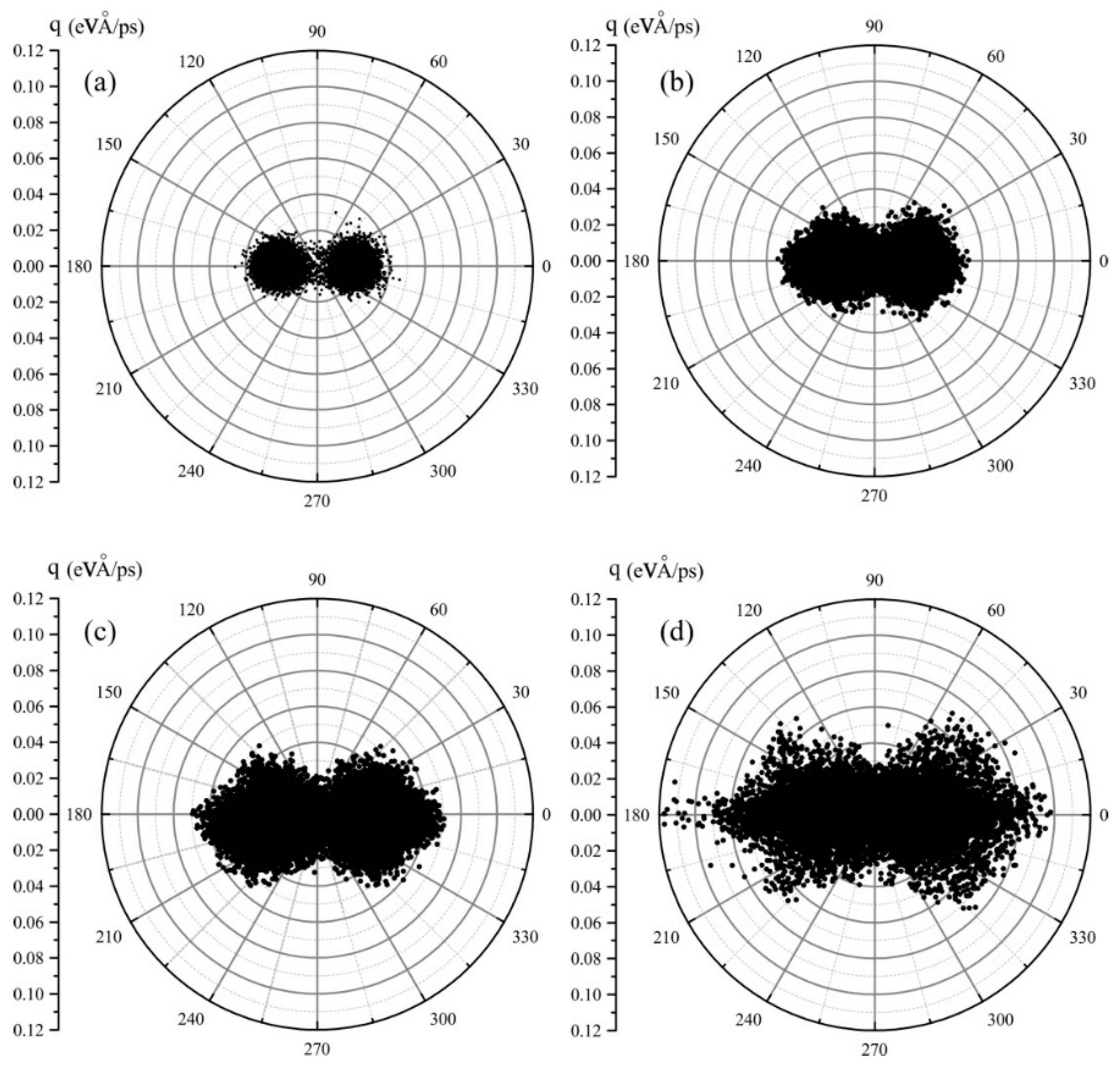 Table 1. Interfacial thermal resistance of different fractal levels.
Table 1. Interfacial thermal resistance of different fractal levels.
© 2018 by the authors. Licensee MDPI, Basel, Switzerland. This article is an open access article distributed under the terms and conditions of the Creative Commons Attribution (CC BY) license (http://creativecommons.org/licenses/by/4.0/).
We use cookies on our website to ensure you get the best experience. Read more about our cookies here.
Accept
We have just recently launched a new version of our website. Help us to further improve by taking part in this short 5 minute survey here. here.
Never show this again