The nature of precursor phenomena in the paraelectric phase of ferroelectrics is one of the main questions to be resolved from a fundamental point of view. Barium titanate (BaTiO3) is one of the most representative perovskite-structured ferroelectrics intensively studied until now. The pretransitional behavior of BaTiO3 single crystal grown using a solid-state crystal growth (SSCG) method was investigated for the first time and compared to previous results. There is no melting process in the SSCG method, thus the crystal grown using a SSCG method have inherent higher levels of impurity and defect concentrations, which is a good candidate for investigating the effect of crystal quality on the precursor phenomena. The acoustic, dielectric, and piezoelectric properties, as well as birefringence, of the SSCG-grown BaTiO3 were examined over a wide temperature range. Especially, the acoustic phonon behavior was investigated in terms of Brillouin spectroscopy, which is a complementary technique to Raman spectroscopy. The obtained precursor anomalies of the SSCG-grown BaTiO3 in the cubic phase were similar to those of other single crystals, in particular, of high-quality single crystal grown by top-seeded solution growth method. These results clearly indicate that the observed precursor phenomena are common and intrinsic effect irrespective of the crystal quality. View Full-Text
Keywords: barium titanate; BaTiO3; Brillouin spectroscopy; acoustic property; precursor phenomena barium titanate; BaTiO3; Brillouin spectroscopy; acoustic property; precursor phenomena
►▼ Show Figures 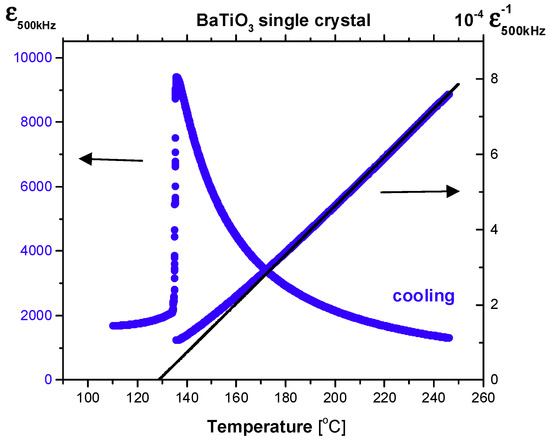