Dementia and cognitive impairment are becoming an increasing burden not only on patients and their families, but also on national healthcare systems worldwide, concomitant with the rapid growth in aging populations. Owing to the lack of disease-modifying therapies for dementia, preventive approaches, including diet, exercise, and learning are garnering increased attention. Etiological studies of lifestyle have demonstrated that low-to-moderate consumption of alcohol, such as wine and beer, may reduce the risk of cognitive decline and the development of dementia. Indeed, individuals who consume low-to-moderate levels of alcoholic beverages on a daily basis were shown to have a significantly lower risk of developing a neurodegenerative disease, as compared with individuals who abstained from alcohol beverages or drank heavily [1,2,3]. Apart from the effects of alcohol itself, resveratrol, a polyphenolic compound present in red wine, has been shown to be neuroprotective [4,5,6,7]. We previously demonstrated that the consumption of iso-α-acids, the bitter components present in beer, prevents Alzheimer’s pathology in 5 × FAD transgenic model mice. In addition, iso-α-acids suppress the microglial inflammation induced by amyloid β deposition in the brain, resulting in protection against cognitive decline. Iso-α-acids activate the peroxisome proliferator-activated receptor-γ (PPAR-γ) and regulate microglial phagocytosis and inflammation [8]. However, the effects of iso-α-acids on inflammation induced by other agents aside from amyloid β have not been investigated. In Alzheimer’s disease, neurofibrillary tangles (NFTs) composed of hyperphosphorylated tau are observed in each brain region with aging, as well as senile plaques composed of amyloid β [9]. Tauopathy is characterized by fibrillar tau accumulation in neurons and glial cells, which is associated with neuronal dysfunction [10]. Proliferation and activation of microglia in the brain around NFTs and senile plaques are prominent features of Alzheimer’s disease. Inflammation caused by activated microglia is associated with the disease progressions [11]. rTg4510 tauopathy model mice overexpress human P301L mutant tau and show neuroinflammation in the brain, accompanied by disease progression [12]. On the other hand, there is no report evaluating the preventive effects of nutritional components with anti-inflammatory activity in rTg4510 mice. Therefore, in the present study, the effects of iso-α-acids on inflammation in rTg4510 tauopathy mice were investigated.

2.1. Effects of Iso-α-Acids on Inflammation in the Brain with Tauopathy

2.2 Effects of Iso-α-Acids on Microglial Phenotype in the Brain of Tauopathy

2.3. Effects of Iso-α-Acids on Tau Phosphorylation in Tauopathy Mice

rTg4510 mice [28], a transgenic mouse model for human tauopathy, and control FVB/N-C57BL/6J mice (wild-type mice) were used in this study. Animals were maintained in an experimental facility at the University of Tokyo. rTg4510 mice overexpress human tau that contains the frontotemporal dementia-associated P301L mutation, and tau expression can be suppressed with doxycycline treatment [28]. For the expression of mutant tau in rTg4510 mice, the mutated gene, located downstream of a tetracycline-operon-responsive element, must be co-expressed with an activator transgene consisting of a tet-off open reading frame located downstream of the Ca2+-calmodulin kinase II promoter elements [28]. Wild-type control mice lack both the tau responder and the activator transgene. Mice under 3 months of age were housed in cages, with free access to a standard purified rodent growth diet (AIN-93G, Oriental Yeast, Tokyo, Japan); mice over 3 months of age were housed with free access to a maintenance diet (AIN-93M, Oriental Yeast). Three-month-old mice were fed 0% or 0.05% (w/w) iso-α-acids for 3 months. The number of mice were 12 (wild-type mice without iso-α-acids), 6 (wild-type mice with iso-α-acids), 12 (rTg4510 mice without iso-α-acids), and 10 (rTg4510 mice with iso-α-acids). The Institutional Animal Care and Use Committee of the Graduate School of Agricultural and Life Science at the University of Tokyo approved all experiments in 2017 (Approval No. P17-020). All efforts were made to minimize suffering.

To measure cytokines and tau in the brain, the hippocampus and frontal cortex were homogenized in TBS buffer (Wako, Monza, Monza and Brianza, Lombardy, Italy) containing protease inhibitor cocktail (Biovision, CA, USA) and phosphatase inhibitor cocktail l and II (Wako) with a multi-bead shocker (Yasui Kikai, Osaka, Japan). After centrifugation at 50,000× g for 20 min (MX-107, Tommy, Tokyo, Japan), the supernatant was collected. The pellets were sonicated in sarkosyl solution (1% N-lauroylsarcosine (Sarkosyl) in 1 mM Tris, 1 mM EGTA, 1 mM DTT, and 10% sucrose, pH 7.5), and the supernatant was collected after centrifugation at 386,000× g for 20 min at 4 °C. The pellets were treated with formic acid and dried. The samples were dissolved in an assay buffer (0.2 g/L KCl, 0.2 g/L KH2PO4, 8.0 g/L NaCl, 1.150 g/L Na2HPO4, 5% BSA, 0.03% Tween 20, and 1× protease inhibitor cocktail (Calbiochem) in ultrapure water, pH 7.4). The total protein concentration of each supernatant was measured using a BCA protein assay kit (ThermoScientific, Yokohama, Japan). Each supernatant was assayed for quantifying total tau and phosphorylated tau (pTau) of pS199, pS396, and pT231 (Thermo Scientific, Waltham, MA, USA) by ELISA. For quantifying cytokines and chemokines, the first supernatant was evaluated by a Bio-Plex assay system (Bio-Rad, Hercules, CA, USA).

The data represent the mean ± SEM. Data were analyzed by one-way ANOVA, followed by the Tukey-Kramer test or Student’s t-test, as described in the figure legends. All statistical analyses were performed using the Ekuseru-Toukei 2012 software program (Social Survey Research Information, Tokyo, Japan). A value of p < 0.05 was considered statistically significant.

Y.A. conducted most of biochemical analysis and wrote the majority of the paper. A.T., Y.T., K.U. and H.N. conducted the experiments using rTg4510 model mice, while K.K., A.T. and H.N. wrote the manuscript.

There is no funding in the present study.

We appreciate the technical support for Yuka Yoshino.

Ano, Y. and Kondo, K. are employed by Kirin Company Ltd. All other authors declare no competing interests. 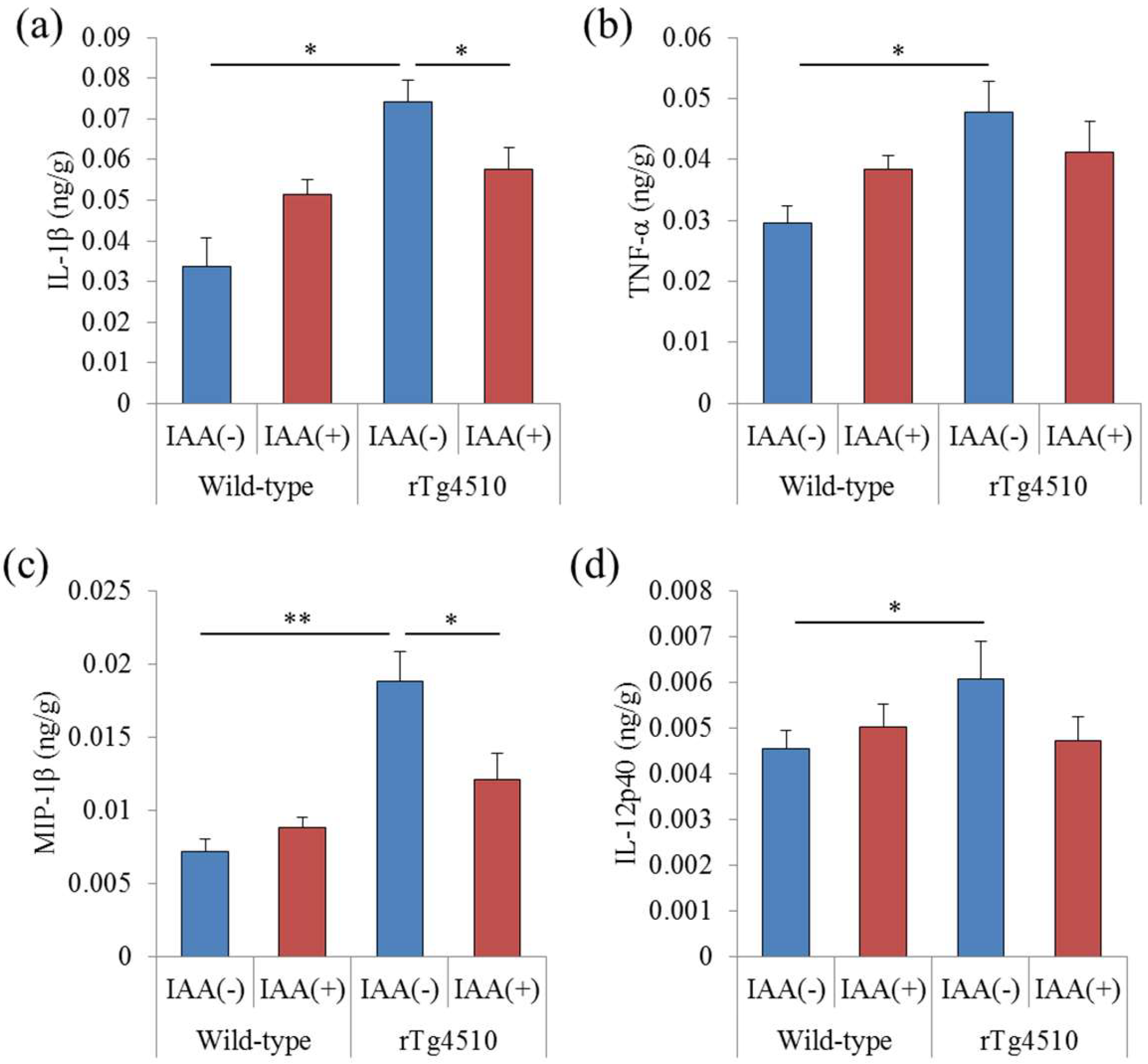