Design, Synthesis, and Evaluation of Amphiphilic Cyclic and Linear Peptides Composed of Hydrophobic and Positively-Charged Amino Acids as Antibacterial Agents

Inflammation is important and has been found to be an underlying cause in many acute and chronic human diseases. Nuciferine, a natural alkaloid containing an aromatic ring, is found in the nelumbo nucifera leaves. It has been shown to have potential anti-inflammatory activities, but the molecular mechanism has remained unclear. In this study, we found that nuciferine (10 μM) significantly inhibited the lipopolysaccharide (LPS)-induced inflammatory cytokine IL-6 and TNF-α production in RAW 264.7 cells. In addition, the luciferase reporter assay results of different subtypes of the peroxisome proliferator-activated receptor (PPAR) showed that nuciferine dose-dependently activated all the PPAR activities. Specific inhibitors of PPARα and PPARγ significantly abolished the production of inflammatory cytokines as well as IκBα degradation. However, PPARδ inhibitor did not show this effect. Our results suggested a potential molecular mechanism of the anti-inflammatory effects of nuciferine in LPS-induced inflammation, at least in part, by activating PPARα and PPARγ in RAW 264.7 cells.
Keywords: nuciferine; inflammation; PPARs; IL-6; TNF-α nuciferine; inflammation; PPARs; IL-6; TNF-α

Inflammatory responses are widely implicated in vast kinds of acute and chronic human diseases, including cancer, atherosclerosis, and diabetes [1]. Macrophages play a critical role and are involved in the self-regulating cycle of inflammation, as macrophages produce multiple pro-inflammatory cytokines and mediators that are involved in inflammation, such as the TNFα and the IL-6 [2]. Interference therapy that target macrophages and related cytokines may be some new approaches for controlling inflammatory diseases.
Regulation of the inflammatory response depends on a variety of potential mechanisms, including peroxisome proliferator-activated receptors (PPARs) actions [3]. PPARs are activated by their synthetic or natural ligands/modulators, which lead to the PPARs to bind to their specific DNA response elements, as heterodimers, with the retinoid X receptor (RXR) [4]. PPARs have been found to have three subtypes, which are named PPARα, PPARβ/δ, and PPAR. They play crucial roles in the regulation of lipid and glucose metabolism. In addition, accumulating evidence reveals that activation of the PPARs are involved in the various types of inflammatory processes, due to the inhibition of pro-inflammatory genes expression and negative regulation of pro-inflammatory transcription factor signaling pathways, in inflammatory cells [5]. Furthermore, activation of PPARs shows the anti-inflammatory effect by inhibiting the activation of nuclear factor-κB (NF-κB), leading to a decrease of pro-inflammatory cytokines and mediators [6]. Therefore, PPARs have been shown to be the drug targets to treat various related inflammatory diseases, such as vascular diseases, cancer, and neurodegenerative diseases [7]. Searching for the effective ligands or modulators of PPARs, for the prevention and clinical therapeutic options, is of great interest.
The natural product nuciferine ((R)-1,2-dimethoxyaporphine; Nuci) is an alkaloid found within the leaves of Nymphaea caerulea and Nelumbo nucifera, which is widely planted in Asia, the Middle East, and some countries in Africa [8]. Especially in China, lotus leaves are usually commercially available for tea due to its pharmacologic effects, such as losing weight, heat-clearing, and detoxifying, according to the traditional theory of Chinese medicine [9]. Recent studies showed that nuciferine, an important component of lotus leave extracts, can improve hepatic lipid metabolism [10], increase the glucose consumption, and stimulate insulin secretion [11]. Anti-inflammation activity of nuciferine was also reported in potassium oxonate-induced kidney inflammation [12], as well as Fructose-induced inflammatory responses [13], in vivo. However, the underlying molecular mechanisms of its anti-inflammatory effects are not fully understood. Based on the inflammatory-related functions of PPARs and the differences of the distinct tissue-specific expression, physiology, and ligand specificity of the PPARα, PPARβ/δ, and the PPARγ, the aim of this study was to investigate the effect of nuciferine on inflammation in lipopolysaccharide (LPS)-induced RAW264.7 cells and to observe if this effect is mediated by the three PPAR subtypes.

To test the effect of nuciferine on the cell viabilities of RAW264.7 cells, 3-(4,5-dimethyl-2-thiazolyl)-2,5-diphenyltetrazolium bromide (MTT) assay was performed in RAW264.7 cells, using different concentrations of nuciferine, ranging from 1 to 50 μM. After treatment for 24 h, cell viabilities were measured, and the results are shown in Figure 1. Compared with the control group (without nuciferine), no significant difference (p > 0.05) were found between control and all the treatment groups, indicating that nuciferine had no direct cytotoxicity, in this cell line. To avoid using a concentration of nuciferine higher than the normal physiological concentration, 10 μM was used in all of the following experiments.

In order to evaluate whether the nuciferine has potential anti-inflammatory activity in RAW264.7 cells, the cells were pretreated with nuciferine (1~50 µM), for 24 h, before exposure to LPS, and the pro-inflammatory cytokines IL-6 and TNFα were examined (Figure 2). Without the LPS stimulation, the concentrations of TNFα and IL-6, in the cell medium, by ELISA were 380.5 ± 51.3 pg/mL and 352.1 ± 60.1 pg/mL, respectively (Figure 2A,B). The LPS treatment significantly increased (p < 0.05) both TNFα and IL-6 levels by 679.2% and 472.6%, respectively. Importantly, the nuciferine decreased both these cytokine levels induced by the LPS, in a dose-dependent manner. Meanwhile, gene expression of these cytokines, by RT-qPCR, showed the same trends as the ELISA results (Figure 2C,D). Pearson correlation analysis of both the protein and the mRNA levels of TNFα and IL-6, with the nuciferine concentrations, are shown in Table 1. With the LPS treatment, it showed significant negative correlation of the ratio of nuciferine concentration versus IL-6 protein level (Pearson r = −0.62, p = 0.004, n = 20) or mRNA level (Pearson r = −0.50, p = 0.02, n = 20). Similarly, significant negative correlations were found between nuciferine concentration and TNFα protein level (Pearson r = −0.58, p = 0.02, n = 20) or mRNA level (Pearson r = −0.69, p = 0.01, n = 20). All these results indicated that nuciferine had a potential anti-inflammatory effect, by reducing inflammatory cytokines production.

PPARs are involved in the various types of inflammatory processes [5]. To study the potential molecular mechanism of nuciferine on the LPS-induced inflammation, we examined the effects of nuciferine on PPARs activity by a luciferase reporter assay. The cells were transfected with PPARs isoforms (PPARα/PPARδ/PPARγ) plasmid and reporter plasmid, followed by the treatment of nuciferine (1 or 10 µM) or PPARs agonists, for 24 h. All the selective agonists WY14643 for PPARα, GW501516 for PPARβ/δ, and rosiglitazone (Rosi) for PPARγ, significantly increased the fluorescence signal in the both the RAW264.7 cells and HEK 293 cells, confirming that the systems for detecting PPARs transactivation activity were correct. In the RAW 264.7 cells, nuciferine significantly increased the transcriptional activities of PPARα and PPARγ, in a dose-dependent manner, compared to control group. However, it did not affect PPARβ/δ activity (Figure 3A–C). Pearson correlation analysis (Table 2) shows a significant positive correlation of the ratio of nuciferine concentration, versus the PPARα activity (Pearson r = 0.70; p = 0.004, n = 15) and a significant positive correlation of the ratio of nuciferine concentration versus the PPARγ activity (Pearson r = 0.51; p = 0.05, n = 15). However, there was no significant correlation of the ratio of nuciferine concentration versus the PPARβ/δ activity (Pearson r = 0.29; p = 0.11, n = 15). Meanwhile, the luciferase reporter assay was carried out using the HEK 293 cells (Supplementary Figure S1) to verify the results. All the results showed that nuciferine increased the activities of the three PPARs but only significantly increased the PPARα and PPARγ activity. The mRNA levels of the targets genes of PPARs, such as carnitine palmitoyltransferase 1A (CPT-1A) for PPARα [14], adipose differentiation related protein (ADRP) for PPARβ/δ [15], CD36 for PPARγ [16], were further investigated (Figure 3D). All these target genes expressions were up-regulated by nuciferine, at 10 μM, in the RAW264.7 cells. Together, these results indicated that nuciferine could enhance PPARs transcriptional activity in mononuclear macrophages.

2.4. Antagonists of PPARα and PPARγ Abolished the Anti-Inflammatory Effects of Nuciferine

PPARs exert anti-inflammatory effects by regulating the NF-κB signal pathway. To further investigate the mechanisms of nuciferine on anti-inflammatory effect, the degradation of IκB-α protein levels were determined with exposure to the nuciferine in the LPS-treated RAW 264.7 cells (Figure 5, original results see Figure S2). When stimulated only with LPS, the cytosolic IκB-α protein was markedly degraded, consistent with the THP-1 treatment results [17]. However, nuciferine treatment attenuated the pro-inflammatory effect of the LPS. Furthermore, the effects of nuciferine were abolished by a co-incubation with PPARs antagonists. The results suggested that nuciferine dramatically inhibited the LPS-induced NF-κB activation and its effect was PPARs-dependent.

RAW264.7 cells were seeded at a density of 1.5 × 103 cells/well in 96-well plates. After 24 h, cells were treated with different concentrations of nuciferine (0–50 μM), for 24 h, followed by an addition 20 μL MTT solution (5 g/L), to each well, for 4 h. The insoluble formazan product was dissolved in 150 μL/well dimethyl sulfoxide (DMSO), after washing out the supernatant [37]. Then, the absorbance at 490 nm was measured using a microplate reader (Olympus America Inc., New York, NY, USA). The percentage of cytotoxicity was calculated by the equation: Cytotoxicity (%) = (1 − A490 of sample)/A490 of control well.

RAW264.7 cells were grown into 12-well plates, treated with different concentrations of nuciferine (0, 1, 10 or 50 μM) and stimulated with LPS (500 ng/mL). Cell-free supernatants were collected and the levels of pro-inflammatory cytokines, TNFα and IL-6 were measured using ELISA kits, by a determination of the absorbance at 450 nm, according to the manufacturer’s instructions. Standard curves were used to calculate the concentration of TNFα and IL-6 in each sample.

HEK293T cells and RAW264.7 cells were plated into 12-well plates at 4 × 105 cells/well without antibiotics. After 24 h at 60% confluence, cells were transfected according to the manufacturer’s instructions. Briefly, PPARs isoforms (PPARα/PPARδ/PPARγ) plasmid (0.9 µg), reporter plasmid PPRE×3-TK-LUC (0.3 µg) and β-gal (0.1 µg) were transfected into the cells, using Lipofectamine 2000 reagents (1:1), for 4 h. Since transfection efficiency is typically low in RAW264.7 cells, more Lipofectamine 2000 was needed (1:2.5) and the transfection time was extended to 24 h. The medium was replaced with a complete media containing DMSO, nuciferine, or PPARs agonists, for 24 h. The cells were harvested and lysed to measure the luciferase activities using a luciferase assay kit, according to the manufacturer’s instructions. The β-gal was transfected to normalize the transfection efficiency [38].

Cells were cultured into 12-well plate with a density of 4 × 105 cells/well. Total RNA was isolated using TRIzol reagent and reverse transcribed into cDNA. Real-time quantitative polymerase chain reaction (RT-qPCR) was performed as described by Yang et al. [39]. Glyceraldehyde-3-phosphate dehydrogenase (Gapdh) was used as an internal control. Ct values of the sample were calculated, and the mRNA levels were analyzed by 2−ΔΔCt method and normalized to Gapdh [40]. The primer sequences were listed in Supplemental Table S1.

Quantitative data are expressed as mean ± SEM using SPSS 18.0 (IBM Corporation, Chicago, IL, USA). Student t test and ANOVA followed by Tukey’s post hoc test were used to analyze the significant difference between two or more groups, respectively. The rank-based test methods were employed when data were not in a normal distribution or the variances were not homogeneous. All the results were representative of at least three independent experiments. 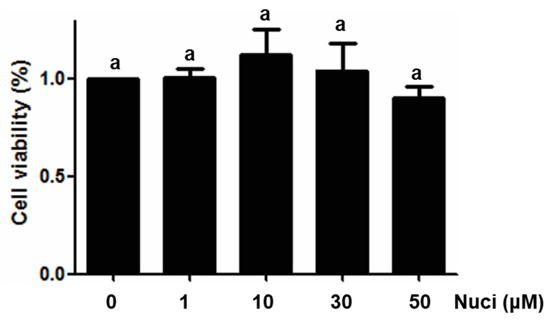 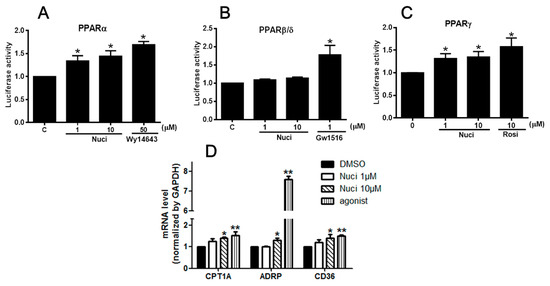 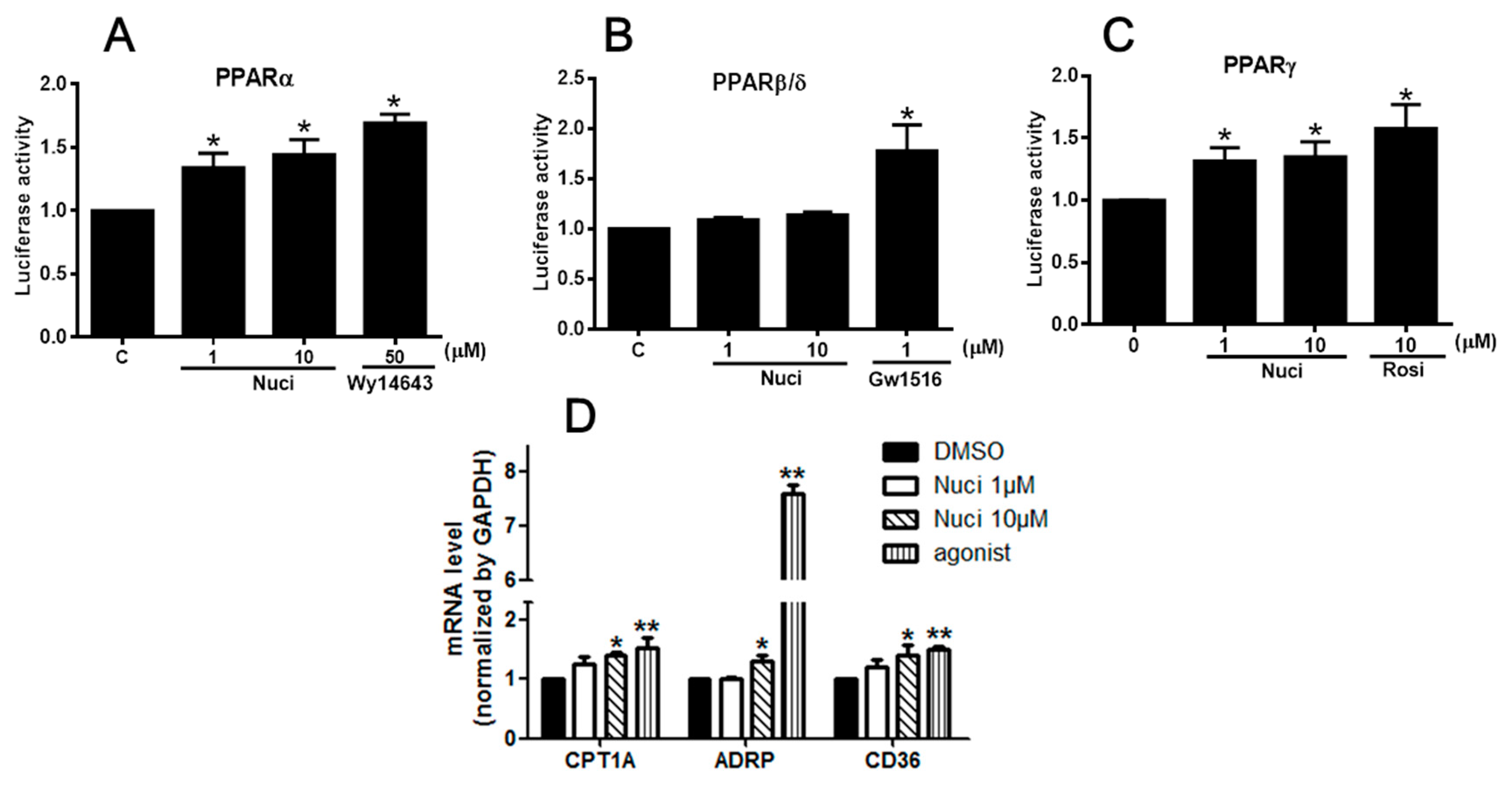 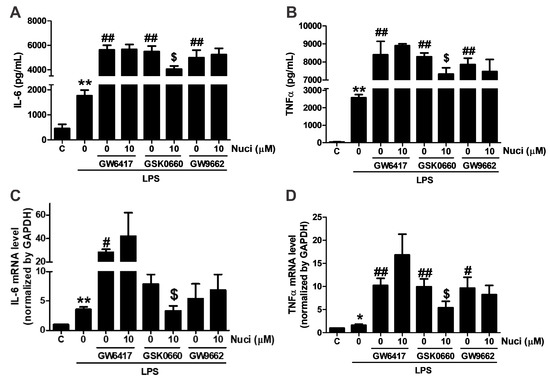 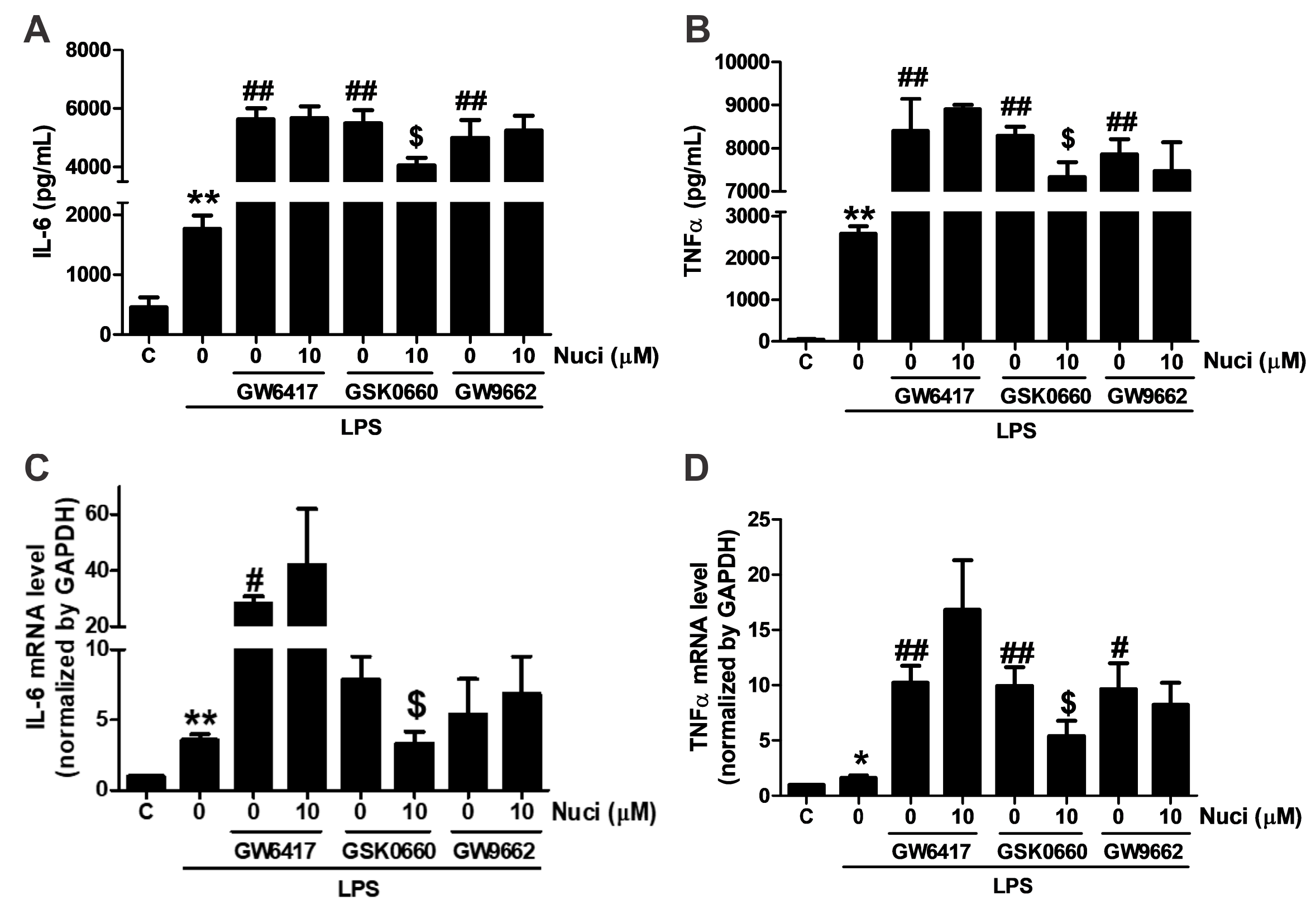