Barley (Hordeum vulgare L.) represents one of the most important cereals cultivated worldwide. Investigating genetic variability and structure of barley is important for enhancing the crop productivity. This study aimed to investigate the diversity and structure of 40 barley genotypes originated from three European countries (France, the Netherlands, Poland) using amplified fragment length polymorphisms (AFLPs). It also aimed to study 5-aminolevulinic acid (ALA) effect on salinity tolerance of six barley genotypes. The expected heterozygosity (He) diverged from 0.126 to 0.501, with a mean of 0.348. Polymorphic information content (PIC) diverged from 0.103 to 0.482 across barley genotypes, with a mean of 0.316, indicating that barley genotypes are rich in a considerable level of genetic diversity. The 40 barley genotypes were further studied based on their geographical origin (Western Europe and Eastern Europe). The Eastern European region (Poland) has a higher barley variability than the Western European region (France and the Netherlands). Nei’s distance-based cluster tree divided the 40 barley accessions into two major clusters; one cluster comprised all the varieties originated from the Eastern European region, while the other major cluster included all accessions originated from the Western European region. Structure analysis results were in a complete concordance with our cluster analysis results. Slaski 2, Damseaux and Urbanowicki genotypes have the highest diversity level, whereas Carmen, Bigo and Cambrinus genotypes have the lowest level. The response of these six varieties to NaCl stress was also investigated. Salt stress (100 mM NaCl) slightly decreased levels of chlorophyll, carotenoid and osmolytes (proteins, soluble sugars, phenolics and flavonoids) in the leaves of Slaski 2, Damseaux and Urbanowicki genotypes at non-significant level, as compared to control samples. However, pigment contents and osmolytes in leaves of Carmen, Bigo and Cambrinus genotypes were significantly decreased by salt stress. Antioxidant enzyme activities were significantly increased in Slaski 2 genotype, but non-significantly increased in Carmen by salt stress. Priming Slaski 2 and Carmen cultivars with ALA under salt stress significantly induced pigment contents, antioxidants enzymes activity and stress-responsive genes expression, relative to NaCl-stressed plants. In conclusion, this study suggested a correlation between variability percentage and degree of salinity resistance. ALA improved salt tolerance in barley. View Full-Text
Keywords: AFLP; European barley; genetic diversity; population structure; salt tolerance; ALA AFLP; European barley; genetic diversity; population structure; salt tolerance; ALA
►▼ Show Figures 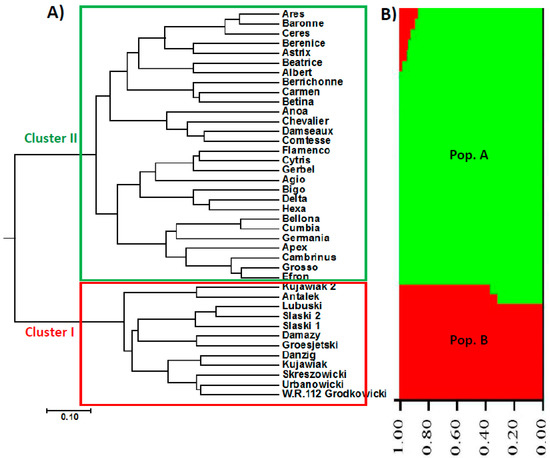