This review reports recent achievements in dimethyl ether (DME) synthesis via CO2 hydrogenation. This gas-phase process could be considered as a promising alternative for carbon dioxide recycling toward a (bio)fuel as DME. In this view, the production of DME from catalytic hydrogenation of CO2 appears as a technology able to face also the ever-increasing demand for alternative, environmentally-friendly fuels and energy carriers. Basic considerations on thermodynamic aspects controlling DME production from CO2 are presented along with a survey of the most innovative catalytic systems developed in this field. During the last years, special attention has been paid to the role of zeolite-based catalysts, either in the methanol-to-DME dehydration step or in the one-pot CO2-to-DME hydrogenation. Overall, the productivity of DME was shown to be dependent on several catalyst features, related not only to the metal-oxide phase—responsible for CO2 activation/hydrogenation—but also to specific properties of the zeolites (i.e., topology, porosity, specific surface area, acidity, interaction with active metals, distributions of metal particles, …) influencing activity and stability of hybridized bifunctional heterogeneous catalysts. All these aspects are discussed in details, summarizing recent achievements in this research field. View Full-Text
Keywords: CO2 hydrogenation; dimethyl ether; low-carbon processes; thermodynamics; catalysis; zeolites CO2 hydrogenation; dimethyl ether; low-carbon processes; thermodynamics; catalysis; zeolites
►▼ Show Figures 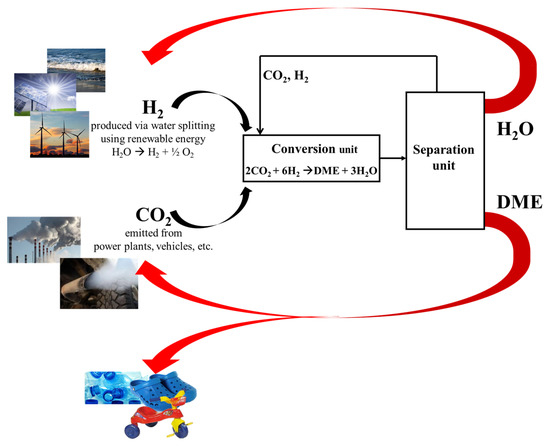